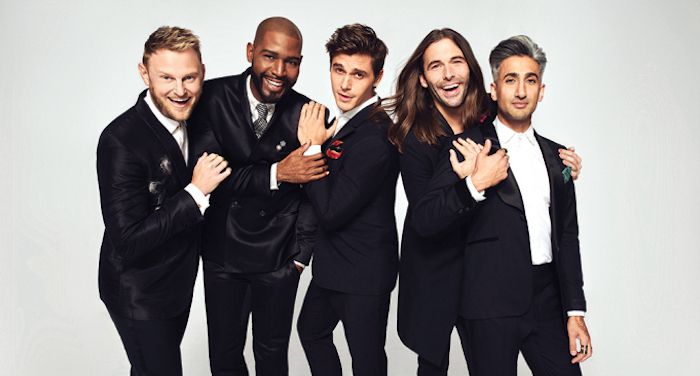 There was some controversy when the fifth season of Queer Eye decided to add a sixth cast member: Joel. A former book editor from a Big Five publishing house, Joel lives in Bay Ridge with a cat named Lolita. He was hired to be a “Reading Expert” in what some are saying was a marketing scheme concocted by his former publisher. A publisher who was once quoted saying, “I will do literally whatever it takes to make reading cool.”

Joel didn’t pose for any of the promotional photos, and the other cast members were bummed that he spent most of his time offscreen journaling. He never once volunteered to drive, but he always insisted on the front seat because reading in the back made him carsick. In the end, most of his scenes were unusable, especially because the transformation recipients did not really understand his role in their transformation. “I already know how to read,” said one. “I didn’t feel connected to him on a personal level,” said another.

Though his scenes never made it to air, sometimes, if you look closely, you can see the shadow of someone with a slight stoop in their neck from too many hours spent poring over books and the subtle squint of someone who’s reading glasses aren’t quite strong enough. That is Joel.

Some of his deleted scenes recently leaked, and neither the cast members nor the reading community want to claim him.

Joel: So tell me: how have your reading habits changed since your seventh kid was born two days ago?

Nathan (transformation recipient): To be honest, I probably haven’t read a book in 15 years. These days I mostly just read WebMD, like the results for “swallowed pen orange poop?” Seven kids is kind of a lot and I don’t have much free time, what with the organic vegetable garden Antoni planted for me to maintain.

Joel: Let’s unpack that. I understand you don’t have a lot of free time, but reading could definitely be considered a form of self-care. I don’t want to get all technical on you, but reading is actually very good for your brain. Do you want to show your kids that you don’t care about your brain health? What’s really going on here?

Nathan: Well, I guess when there are only so many hours in the day and I fall into bed exhausted every night and one of my seven kids wakes me up by jumping on my stomach every morning, I just haven’t found the time to focus much on myself.

Nathan: I sort of do.

Joel: Wow, we really got to the bottom of some deep-seated stuff there. I’m getting emotional because of how much I love books. Are you? Cameras, can you zoom to see if there are tears?

(Cut to the next day)

Joel: So Nathan, I want to take you somewhere really special to me. Can we get a blindfold?

(They pull up, Nathan is blindfolded)

Joel: Okay, take off your blindfold.

Joel: This is a bookstore!

Joel: Now watch how if I pull this paperback off the shelf and I just give the cover a teeeeeeny tiny tear—here you try one—the book is now in unsaleable condition and I can probably get a discount.

Joel: BOOKSELLER! This book is damaged and it’s the only copy, can we get 40% off?

Nathan: Um, that doesn’t really seem like something I want to do. I am also a business owner in this community? I supply 99% of this town’s power saws.

Joel: Sure. Anyway, Nathan, a place like a bookstore is great because they’re so desperate to stay in business that they’ll usually do whatever you want. You can also fit some of the slimmer paperbacks down your pants. I call that “the French tuck.”

(In the car after the bookstore)

Joel: So how do you feel after sort of stealing a couple of books? Not as bad as you thought, right? I’m having Bobby build a bookshelf around your bed that I will fill with some of the books you already should have read by now like The Rise and Fall of the Third Reich and Moby-Dick. The bookshelf will also act as a barricade from your kids interrupting your reading time. As your resident Reading Expert, I am telling you: it really doesn’t take a lot. I’m just asking for like three or four hours a day. You know, the time that you would otherwise spend taking care of your children. You deserve some ME TIME and your kids will respect you for that.