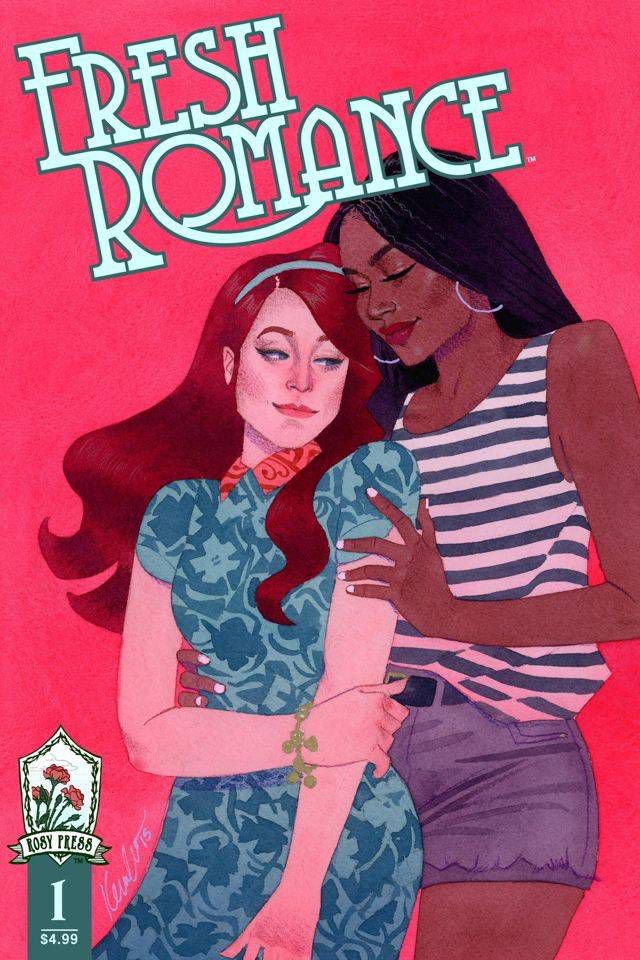 Recently, a few comics-lovers and I got into a discussion about which books we would recommend for 16-year-old readers. We reminisced about which comics we loved as teens, but we also talked about which comics we wish we’d read at 16—the issues or books we hadn’t known about or hadn’t been created yet, the “OMG YES!” comics that make us wish we could time-travel just to force them into the hands of our former selves.

For me, that comic is Fresh Romance. I love all three storylines, but “School Spirit” resonates the most deeply with me.

I wish my younger self could see the relationship between Malie and Justine. Yes, they’re worried about being found out. But the potential reprisal is all worth it. They harbor no guilt for what they feel for each other—as it should be. They know what they want, and they are happy to have found it.

I grew up in closely conscribed circles: I was homeschooled and a fundamentalist Christian in a rural town.

There was no room to feel what I felt. I knew I liked boys… but I was also attracted to girls. I burned with my secret, disgusting shame. I was already painfully shy, but my secret left me on the outer ring of every social circle. I didn’t know how to talk to other girls; I didn’t know why I saw many girls as friends but a few I saw as… more.

Even now, I have trouble talking about my sexuality. Because I’m happily married to a man, most people assume I’m straight. How am I supposed to correct that perception? If the conversation comes up, sometimes I do. But often I turn away—still afraid of being judged, of being found queer in all senses of the word.

Will my friends think I’m hitting on them if I tell them I’m bi? Will our friendship change? I know I need to have more faith in the fantastic group of people I’m lucky enough to have around me. But the fear comes from within me, not from them. I still struggle sometimes with that old question: Is what I feel wrong?

When I was 16, I was in my first and only year of high school. I’d begged my parents to stop homeschooling because the confines of my limited world pressed down on me. Much to my surprise, they finally relented. At school, there were kids who were whispered about, gossip that made my stomach clench (“I heard she’s a lezzy…”). But there were also students—and a teacher—who were out and proud. This was the world I’d yearned to be a part of.

But I still felt distant. I supported my queer friends, but I wouldn’t afford myself the same freedom. I didn’t judge others, but I judged myself harshly. I convinced myself that what I felt wasn’t real. If I were really gay, I reasoned, I wouldn’t also like men. This must just be a phase. Soon, I would outgrow it, and never think of it again.

A friend recently asked—with the best of intentions—why it is so important to see queer couples represented in comics.

Because so much of our lives are stories we tell ourselves. Narratives to get us through. And we need as many different stories as there are different people. All three storylines in Fresh Romance depict queer relationships as healthy, normal, unremarkable. Natural. Carefree. Beautiful. And we need that. I need that.