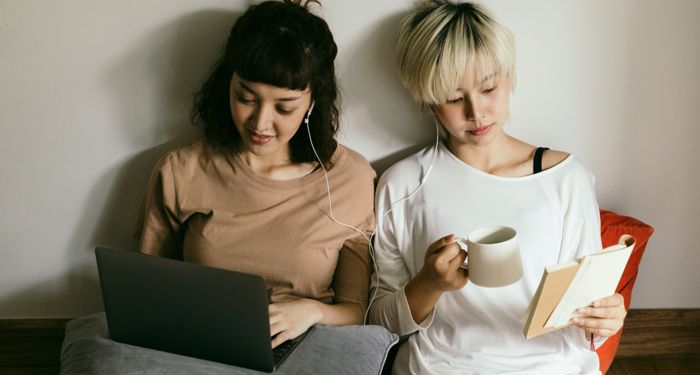 I don’t spend enough time on bookish social media to make any scientific, data-based pronouncements, but there is something I’ve noticed in the hours I’ve spent scrolling through queer Bookstagram: the same queer books show up again and again. Don’t get me wrong: most of these are books I’ve read and loved, or books I am excited to read. I am thrilled that they continually show up in my Instagram feed. I am delighted that they’re getting noticed by mainstream press, racking up lots of Goodreads reviews, and showing up on Best Of lists. They should be getting attention! They deserve attention! This is not a case of either/or.

I’m pretty deeply immersed in the queer book world at this point. Whenever I come across a book on a 2021 queer book list that I haven’t heard of, I get excited. I choose my queer reads from an extremely wide pool because I devote a significant amount of time to keeping up with new releases and scrolling through indie press catalogues. But there are so many readers out there who aren’t paying such close attention to every queer book being published. Readers rely on BookTok, Bookstagram, BookTube, Book Twitter, bookish blogs and newsletters, bookstore displays…the list goes on. Step back and think about it. How do you decide what to read next? The answer is different for everyone, but it’s often some variation of “I heard about it from…” Talking about books on the internet matters. I talk about a book I love, someone else decides to read it, and they talk about it, too, so someone else reads it, and someone else, and someone else…and before long that book is everywhere you look. It’s a beautiful thing.

I just want more of it. More talking about more books. I don’t want anyone to stop shouting about how much they loved that super-hyped queer romance. I just want to see all of the other amazing queer romances published in the same year get some love, too. Queer lit is so expansive. It comes in every genre. There is queer horror and queer sci-fi and queer humor and queer everything else under the sun. And, even better, there isn’t just one queer horror book published each year, or one queer mystery! Yes, there are some genres that still have a long way to go in terms of the diversity and number of queer books published annually. But let’s stop pretending that there’s only room for one literary novel by a trans author, or one fantasy with an ace protagonist, or one lesbian thriller. That’s a model of scarcity rooted in racism and sexism and homophobia, and I’m not buying it. Queer lit is abundant. I want to see that abundance celebrated.

Today I’m highlighting a small sampling of queer books from 2021 that you might not have heard of. It’s time to fix that! A lot of these are personal favorites of mine. They’re also the books I don’t see every time I open Instagram. They don’t have many Goodreads reviews — many of them less than 300. It’s time to fix that! If you’re ready to shout about all the queer books with me, read on!

Detransition, Baby by Torrey Peters has gotten a lot of attention — which is amazing! It was one of my favorite reads of 2021 by a long shot. I also adored Summer Fun by Jeannie Thornton. It’s another contemporary novel written by a trans woman that explores all the complexities of trans life. Why are so few people talking about this one? It’s hilarious and tender and so observant, and it’s brilliantly structured as a series of letters a trans woman writers to her idol, a mysterious 1960s pop singer.

Summer Fun is just the beginning, though. Have you heard of A Dream of a Woman by Casey Plett? Or A Natural History of Transition by Callum Angus? They’re both absolutely stunning short story collections by trans authors that came out last year. A Natural History of Transition is fantastical, while A Dream of a Woman is starkly realist. Both feature shifting and unpredictable trans characters, characters who are quirky and strange and selfish and funny.

With Teeth by Kristen Arnett is another literary queer novel that I see around the internet a lot. You guessed it, it’s another novel I love. I also love Love in the Big City by Sang Young Park, a sad, meandering, thoughtful novel about a gay man living in Seoul and his various romantic entanglements. And I love The Spectacular by Zoe Whittall, which is such a quietly queer novel. It’s about Missy, a rock musician who grew up on a commune in Vermont, and her complicated relationship with her mother, who left when Missy was a kid.

Then there’s And Then the Gray Heaven by R.E. Katz, which is a beautiful meditation on queer grief and partnership and art. It’s a short literary book published by a small press, but that shouldn’t stop anyone from shouting about it. And I still cannot understand why people aren’t jumping up and down about The Wrong End of the Telescope by Rabih Alameddine. I loved this one so much that as soon as I finished it, I went and bought Alameddine’s entire backlist. The Arsonists’ City by Hala Alyan is a brilliant family saga about two generations of a Syrian Lebanese American family, and though it does seem to be getting some well-deserved love, can we also talk about how queer it is?

Honey Girl by Morgan Rogers is an Instagram favorite. Again, I can see why! It’s a heartfelt and often hilarious story about a woman who gets drunk married in Vegas and then falls in love with her wife. Equally hilarious and moving is Skye Falling by Mia McKenzie. Skye has a habit of running away from all her problems, but that strategy stops working abruptly when 12-year-old Vicky, her daughter via egg donation, shows up. Skye Papers by Jamika Ajalon is another queer novel about being young and how messy it can be to figure stuff out. Like Honey Girl, it brilliantly captures the feeling of being adrift in the world, and in your life.

In the realm of the speculative, A Psalm for the Wild-Built by Becky Chambers is one that pops up all over my Instagram feed all the time. I understand why — it was another 2021 favorite for me. But let’s take a minute to appreciate just how much queer speculative fiction was published last year! I loved Nino Cipri’s Defekt, the whimsical and heartwarming sequel to Finna. Defekt is about a loyal employee of the IKEA-like furniture store LitenVärld who, during an overnight inventory shift, discovers there is a lot more to his world — and his life — than he realized. Found family! Vengeful furniture! Tender romance and fierce friendship! I need us all to shout about this one.

I’ve been single-handedly trying to get everyone I know to read Shadow Life by Hiromi Goto and Ann Xu, a graphic novel about a badass bisexual elder who fights off death with a vacuum. I mean, do I really need to tell you anything else about this one? I can’t wait to get my hands on a copy of Future Feeling by Joss Lake, a speculative novel about a trans dog walker who tumbles into an adventure in a mysterious dimension. And I’m equally excited about In the Watchful City by S. Qiouyi Lu, another queer fantasy novel I haven’t seen a lot of people talking about.

I don’t want to stop there, but I suspect I’ve already gone on for too long. And these are only a few of the queer books from 2021 that I personally loved, or can’t wait to read. I didn’t even get into YA, or nonfiction, or romance. Luckily, this isn’t the only place you can find fantastic, lesser-known queer books. You can take this quiz to get an under-the-radar queer rec! Here’s a great list of under-the-radar queer books by authors of color. This list of queer releases from June of last year has some buzzy books on it, and some lesser-known gems! And our Best Books You’ve Never Heard Of series has some great queer picks, too.