I’ve set off on a trip around the world—via female crime writers. First stop, canned mackerel for breakfast, fjords, and lots and lots of sweaters: that’s right, we’re in Norway!

The Hanne Wilhelmsen series was actually introduced to English-speaking audiences backwards, in that 1222, the first book translated into English, is the eighth and most recent book in the series. In it, we meet the aforementioned Hanne Wilhelmsen, who retired from the police force after being shot in the spine and paralyzed from the waist down. She happens to be on a train that derails during a blizzard, resulting in a large group of passengers being stranded in a nearby hotel… and then the murders start. As I said back in May: …she’s a woman who takes advantage of the prejudices and assumptions often attached to her wheelchair; she’s more than willing to eavesdrop, to manipulate, to lie; she’s a crankier, less polite Miss Marple. 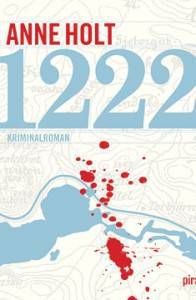 When I went back to the beginning, I found that pre-injury Hanne is still very much the Hanne I already knew—still easily irritated, still prone to long periods of silence, still slow to trust, and still intensely private, but much, much more willing to laugh. And I discovered that her love life clearly had a large shake-up somewhere along the way—in 1222, she and her partner, a woman named Nefis, have a young child, whereas in the first four books, she’s been with the same woman, Cecile, for almost twenty years—so I’m kind of DYING to know what happened there. TRANSLATE FASTER, PEOPLE. I NEED BOOKS FIVE, SIX, AND SEVEN.

Where to begin: I usually prefer to read series books in order, but in this case, I’d really recommend starting with 1222—it works as a stand-alone, and since Hanne is so isolated from her family and friends, she’s completely front-and-center. Also! It’s the only one (so far) that’s written in the first person—the other four that have been translated are in the third, and while Hanne is clearly the star, she’s not always in the spotlight. 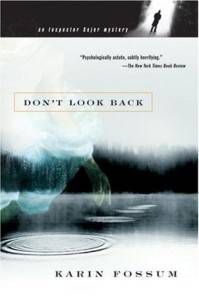 Fossum’s Inspector Konrad Sejer is the only male protagonist in this list, and I’ve got to say—in reading a whole pile of female-written crime novels, the lack of male gaziness is INTENSELY noticeable. It was in reading the second book—Don’t Look Back, in which the naked body of a teenage girl is found in a small, seemingly idyllic, town—that it really first struck me. The descriptions of her body and how it was found were so very NOT AT ALL titillating, and neither Sejer nor the narrator ever treats or views the female characters as objects. It was so very refreshing that it made realize just how often the opposite is the case.

Sejer himself is a great character: he’s a grieving widower, a father, and a grandfather, and watching him interact with his colleagues, his family, and his suspects is a joy. For crime novels, they’re surprisingly warm books—I’m just as invested in the ongoing relationships and character growth as I am in the mysteries themselves—but Fossum certainly doesn’t shy away from the hard, dark, occasionally tear-inducing endings.

Where to begin: I’ve only read the first four—eleven of the twelve have been translated so far—and any one of them would work on its own, but I’d start at the beginning, with Eva’s Eye. 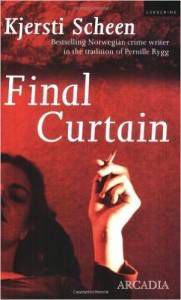 Final Curtain starts with the main character, Margaret Moss, an actress-turned-private-investigator, on a stakeout. She’s bored, she’s tired, she’s coming down with a cold, and she’s out of Kleenex, so she’s been reduced to wiping her runny nose on her sleeves. She decides, THE HELL WITH IT, I’M LEAVING, jams her key in the ignition, turns it… and the car doesn’t start. So she pulls the key out… and pulls the entire ignition cylinder out with it.

At that point, my friends—literally two pages into the book—I was totally in love.

And my love continued all the way through, what with her love of drinking, the head injury that leads to weeks of recovery on the couch, the attractive-but-married truck driver, the disappearing body, and twist after turn after twist after turn. Final Curtain is the noir-iest of this whole bunch, and I DON’T UNDERSTAND WHY THE OTHER FOUR BOOKS IN THE SERIES HAVEN’T BEEN TRANSLATED, I’M DYING. Seriously, do I really have to learn Norwegian? I’m so desperate for more that I admit to trolling around all of the free language-learning apps, but none of them even seem to offer Norwegian! PLEASE, SOMEONE OUT THERE IN PUBLISHER-LAND, HEAR MY PLEA: GIVE ME MORE KJERSTI SCHEEN.

Where to begin: Final Curtain, obviously. (Note: Even THIS one isn’t readily available in the US—I had to buy a used import.) 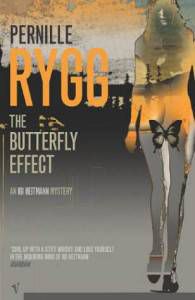 And finally, we come to Pernille Rygg’s Igi Heitmann books, which, like Final Curtain, are on the more noir end of the Darkness Spectrum.

Igi is a research psychologist—in the first book, The Butterfly Effect, she’s working on linking chaos theory with psychology—whose private investigator father has just died. She’s got a less-than-great relationship with her mother and can’t stand her stepfather. She loves her husband Benny, but the fact that he occasionally dresses as a woman and dates other men has created somewhat of a strain on their marriage, so she moves into her father’s office/apartment for a while to figure everything out. After a clue in his office leads her to the dead body of a woman who appears to have died on exactly the same day as him, she begins to investigate in earnest, eventually uncovering child abuse, decades of secrets, and a possible cult.

The second book is set a few years later. She and her husband—SPOILER, THEY WORK THINGS OUT—now have a young daughter, and someone’s been spray painting horrible things about Igi all over the neighborhood. The art world, pornography, grieving parents of dead and/or missing children, and an exploration of Oslo’s gay nightlife all figure in.

Where to begin: Either one, The Butterfly Effect, or The Golden Section. I thought the second book was stronger, but I loved seeing how Igi and Benny and their relationship changed and grew from the first book to the second, so. IT’S UP TO YOU. (Note: I had to track down used copies in this case, too.)

When you read a whole pile of books that originate in the same place, you start to notice similar themes and details. Here are three things I noticed and felt the need to research further:

So many mentions of people wearing sweaters, and almost every single time, said sweater was specifically identified as either Icelandic or Norwegian: 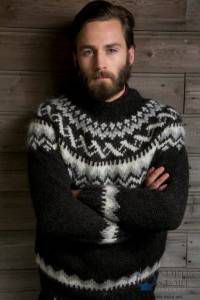 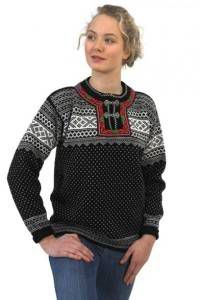 It didn’t take long before I noticed that almost every single time characters were imbibing, there would be some sort of note—sometimes conversational, sometimes internal—about how much they were planning to drink and how they were going to get home. It turns out, Norway’s blood-alcohol limit is 0.02%—as opposed to the US limit, which is 0.08%—and there’s a whole list of fines, license suspensions, and mandatory jail times that are tied to various offenses. So, yeah. Don’t drink and drive in Norway. (I mean, OBVIOUSLY don’t drink and drive ANYWHERE, but you know what I mean.)

Quite a few of the books looked at immigration, tensions between ethnic Norwegians and a specific immigrant population due to racism or cultural differences; some made mention of the protagonist’s own ingrained racism; two of the four series had major LGBT characters—and actually, the authors of both series (Holt and Rygg) are also lesbians; two of the four series portrayed mixed race families.

I’ve always thought of the Scandinavian region as being predominantly white, and a lot of these books portrayed significantly more diversity than I’d expected—which was really cool, as well as a nice reminder that Assumptions Aren’t Data.

So, where should I head next? I’m thinking Scotland? Or maybe Japan…