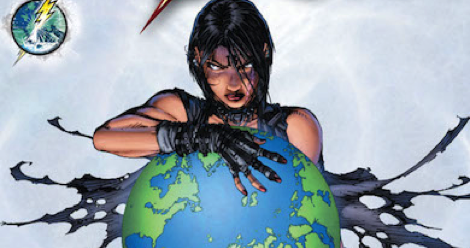 On October 19th, Variety announced that Elizabeth Banks and the CW are developing Project Thirteen, a new show based around Traci Thirteen. Traci is one of my favorite obscure DC heroes, so I am pretty stoked about this possibility, and you should be too! 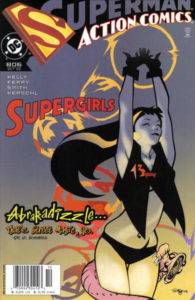 Traci is the daughter of Dr. Terrance Thirteen, parapsychologist and professional skeptic—which is kind of awkward for her, having inherited magical powers from her late mother, Meihui Lan. The tension between them got bad enough that she spent some time living on the streets of Metropolis, drawing on its “urban magic” as semi-superhero Girl 13. After team-ups with Superman, Superboy, Natasha Irons as Steel, and a short-lived Supergirl named Cir-El (miss u, kiddo!), Traci moved out of the Superman books and started filling up the ranks whenever the DCU had a supernatural threat that needed to be combated by every obscure magical superhero the writer could think of.

She eventually found a regular supporting gig in the pages of Blue Beetle, dating its titular hero Jaime Reyes. The Teen Titans offered her a spot on their roster but she declined, instead forming a short-lived coven with fellow magical teens Black Alice and Zachary Zatara. She also became a member of the Croatoan Society, a team of semi-mystical detectives.

Though Traci had a featured role in the company-wide Flashpoint event, she all but disappeared from the DCU until Rebirth, which revealed her to be in a relationship with Natasha. She’s now a regular supporting character in Superwoman. 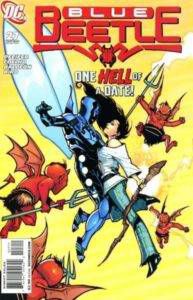 Adapt this entire issue (which is mostly in untranslated Spanish) directly, please!

As of now, all we know about the possible show is this description from Variety: “Titled ‘Project 13,’ the one-hour drama would center on Traci, a twenty-something forensic scientist and believer in the paranormal who discovers her own hidden extra-sensory abilities when she joins her estranged, skeptic father to investigate mysterious cases of the paranormal and unexplained phenomena.” But in honor of my girl’s surname, here are 13 thoughts I had when I saw the news:

2. She had better not be whitewashed. (Her mom is Chinese.)

3. Very happy to see a woman heading up this project! I’d like to see some WOC co-producing, directing, and writing too, though, particularly Asian American women.

5. I’m kind of bummed that she’s been aged up to her 20s, since we already lost the opportunity for a teen show with Supergirl, and we already have a super-forensic scientist on The Flash.

6. I’m also bummed about the missed opportunity to have her hang with a group of superteens. Some of my favorite Traci adventures have been her ensemble ones, like when she, Natasha, and Cir-El teamed up to save Superman from a ninja ghost (#comics), or the aforementioned coven with Black Alice (another fave) and Zachary Zatara. 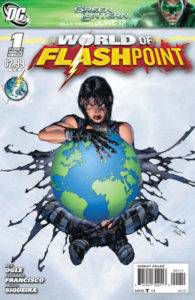 I am very excited to see how the show costumes her. (Maybe not in those pants.)

7. No, seriously, can we get that coven? Or at least Black Alice as a semi-antagonist, and any member of the Zatara family? Preferably Zatanna, but I’ll take anyone wearing a top hat all the time for no reason.

8. I have been demanding Traci and Natasha on Supergirl since literally the moment the show was announced, so yes, obviously I want Natasha to show up, and I am very here for Natraci. Tratasha? Thirteen Irons? Whatever, Traci and Natasha should date and solve crimes and be geniuses, the end. (Sidenote: I am very sorry if that old article of mine gave the Supergirl writers the idea to use Mon-El.)

9. That said, I’m also a big fan of Traci’s pre-Flashpoint relationship with Jaime Reyes, and Jaime in general. DC shared test footage for a Jaime show a whopping seven years ago, but we haven’t heard a peep since. (Second sidenote: the line in that article about the absence of live action superheroes on TV is hilarious in 2017.) I don’t want to give up on my dream of a proper Blue Beetle show, especially if Ted Kord and Booster Gold get to make appearances (or, alternatively, that Blue and Gold movie they keep promising us, with Jaime as a major player), but if we can have two different Barry Allens at once, why not two Jaimes? Not to mention that DC’s shows have not historically been great at bi representation, between John Constantine’s straightwashing and Legends of Tomorrow’s bad habit of forgetting about Sara Lance’s past relationships with men. It would mean a lot to have a bisexual woman of color as a protagonist. 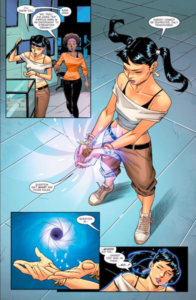 PUT THESE ADORABLE GIRLFRIENDS ON THE TEEVEE THANKS

10. In Blue Beetle, Traci mentions in passing that she lived with Ralph “Elongated Man” Dibny and his wife Sue for a while, and they taught her how to solve mysteries. The Dibnys have also been MIA since…well, since their horrible deaths before Flashpoint, but DC can make it up to me by putting them on this show. Come on, DC. You owe me.

11. Maybe take it down a notch on the daddy issues? They seem to be a prominent factor in this pitch. And while I enjoy stories of young women and their fathers as much as the next person, between the Lances, the Wests, and the upcoming Pierces of Black Lightning, the CW is kind of saturated with detective dads. Also, honestly, so far all of those dads have been total jerks.

13. Please include Detective Chimp. I don’t care how. I just want a talking monkey (well, ape) in a deerstalker being sarcastic. PLEASE, MS. BANKS, I LOVED YOU IN MAGIC MIKE XXL. (No, seriously.)

Any other Traci fans out there? What are you guys hoping to see in this series? Or are you all CW superheroed-out?