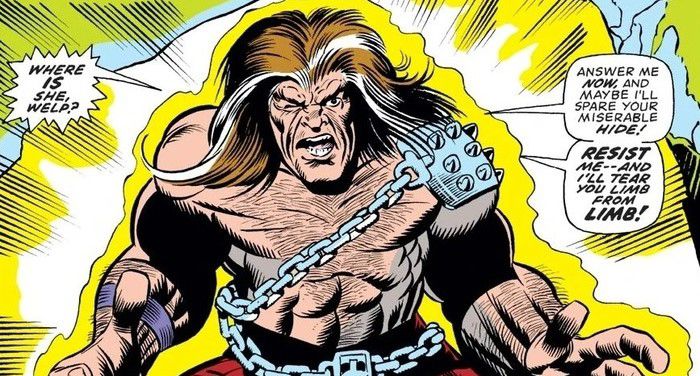 What is a superhero without a supervillain? Not much. Some supervillains, however, are worth a lot more than others. I have therefore decided to spotlight some lesser-known villains. Are they underrated gems or irredeemable losers who deserve to be forgotten? You decide! Today’s subject: Mahkizmo!

The second Jessica Plummer mentioned this guy in her Sexy She-Hulk article, I HAD to know more about him. And I was not disappointed.

Somehow, these opposing futures are slowly coming together, and only one will survive the impending merger. So both worlds send one representive back into the 20th century to try to steer events in a way that will allow their own culture (with either men or women reigning supreme) to come to pass. The women send Thundra; the men send Mahkizmo, the Nuclear Man.

Mahkizmo comes all the way from the planet Machus, where he rules, to beat the stuffing out of the Fantastic Four and drag Thundra back to the future with him. The FF go to Machus to rescue her, where they discover Mahkizmo uses a “domina-ray” to sap his enemies’ willpower. He also has the power to throw literally explosive punches, hence the moniker “nuclear man.” Nothing to do with Superman IV, thank goodness.

The Fantastic Four, with a big assist from Thundra, defeat Mahkizmo by slugging him just as he’s about to go nuclear again. The resulting explosion somehow provides the energy necessary for Machus to merge with Femizonia without destroying either planet. It also magically fixes all the planets’ problems by making men and women equals. That’s quite a punch.

All this happened in Fantastic Four #151-153. This future world continued to live happily for years, with warrior men and warrior women kicking ass side by side. Sounds groovy, right? But not to Mahkizmo.

How Mahkizmo came back isn’t revealed until the end of this two-part story, but we’ll cover it first: while he did explode, he just turned into a sentient invisible cloud that was able to witness how “perverted” his world had become. Eventually, he was able to possess some poor schmo and turn him into a new Mahkizmo.

Determined to end gender equality once and for all, Mahkizmo resolves to use a super-aging device to murder every 20th century female. This seems like it would put the kibosh on Mahkizmo’s entire future, a fact you’d think the scientist who invented the bomb — if not Mahkizmo himself — would be smart enough to recognize.

But there’s a new wrinkle! There are some Greek gods running around making bets about who they can make fall in love with whom, and Eros shoots Mahkizmo with the proverbial Cupid’s arrow so he starts crushing on She-Hulk. Don’t worry, Shulkie immediately starts yelling at the writer to let him know what she thinks of all that.

Mahkizmo drags She-Hulk back to the future to marry him, and she plays along long enough to learn everything I just explained. After a whole lot of shenanigans, the Thing and She-Hulk’s boyfriend come to her rescue, not that she needs much rescuing. The story ends with Eros coming to take his arrow back and Shulkie explaining that little flaw I pointed out in Mahkizmo’s villainous plan.

Mahkizmo got a complete makeover in Cap’s 2019 series. Now going just by Nuclear Man, he also got himself a really ugly jacket and an even uglier haircut. He’s still got that same sunny disposition, though.

He did, evidently, take She-Hulk’s little talk to heart. Now that he knows where babies come from, he’s gone full Gaston and wants to find a woman strong enough to bear him lots of strapping boys like him. He picks Captain Marvel, who has been through this nonsense before and refuses to cooperate.

Nuclear Man traps Cap and a bunch of other women in a dystopia realm, where they band together and fight back. This is a lot harder to do than it might have been previously: he has clearly grown craftier and more intelligent since his last appearance. He even did research on Cap to find the best way to “break” her. (It doesn’t work, but still, the effort was there.)

This storyline also introduces us to Nuclear Man’s grown son, Som. That’s an acronym for Son of Mahkizmo, which is one step above naming the kid Testosterone or Manly McMannington. Unsurprisingly, Som throws his lot in with the women to help stop his father’s schemes.

We learn nothing of Som’s mother or what kind of family life they had. That would probably make for too depressing or horrifying of a story, anyway.

Aside from a do-nothing cameo in Fantastic Four: Foes, the comics I’ve discussed encompass the entirety of Mahkizmo’s villainous career…so far.

A villain powered by toxic masculinity is a hilarious idea. In the late ’70s, when he first appeared, this concept really couldn’t be explored to the fullest. Back then, the Marvel Bullpen felt — due to pressure either from readers or their own sense of morality — that they had to depict “both sides” of an issue, even when it came to topics like sexism where the two sides are nowhere near the same.

In other words, when they depict one world in which women are completely subjugated by misogynists, they must counter it with a world where men are completely subjugated by misandrists. (Their obvious disdain for women’s lib also contributed to this decision, I’m sure.) This blunts the full villainy of Mahkizmo’s actions and distracts from the very real danger posed by the real men who think like him. (While there are surely women who hate and want to harm men, they aren’t the ones in power passing anti-man laws, systemically trapping men in abusive relationships, or harassing men online for nonsense reasons in large numbers.)

Now, of course, things are a lot different. As we saw in Captain Marvel, Mahkizmo is evil in a much more grounded and scary way. I’m a little conflicted on that — I did enjoy the screaming looney tune version of the character — but in many ways, this makes him the perfect villain for the post-#MeToo era. And since he escaped at the end of Captain Marvel #5 rather than getting killed or captured, I wouldn’t be surprised if Marvel brought him back to serve that purpose again in the future.