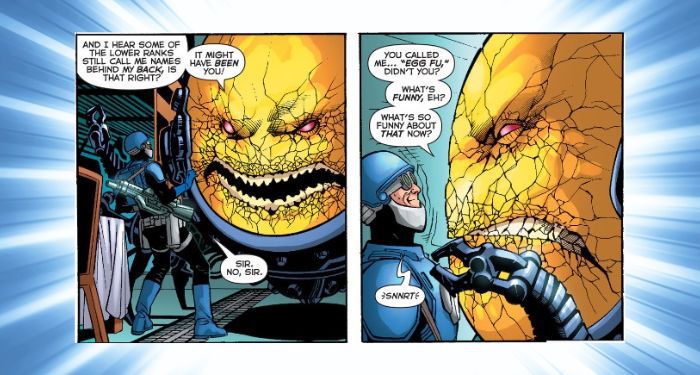 What is a superhero without a supervillain? Not much. Some supervillains, however, are worth a lot more than others. I have therefore decided to spotlight some lesser-known villains. Are they underrated gems or irredeemable losers who deserve to be forgotten? You decide! Today’s subject: Egg Fu!

You’d think this character’s name would have tipped me off that he’d be a heinous racist caricature, and to some extent, I did realize that. But somehow, I didn’t realize just how offensive he was going to be until I read his debut issues. If you choose to proceed, please go into it knowing this more than I did.

Let’s cut to the chase: Egg Fu is a giant Chinese egg with a Fu Manchu mustache who is bent on subverting “the democracies” of the world and propagating communism. He debuted in Wonder Woman #157-158, but beyond that, his origins remain a mystery. Where does he come from? Why does he hate democracy? Never addressed! No answers for you!

He concocts his schemes on Oolong Island, which is somehow not the stupidest sentence I will type today. On his island hideaway — which we later learn is off the coast of North Korea — he builds rockets and blows up anyone who tries to spy on him. Despite being a weird giant egg man with a pun for a name, Egg Fu is respected/sanctioned by at least some faction of the Chinese government, as he has a whole army at his disposal.

Normally, this is the spot where I’d show you some panels so you can see what I’m talking about, but you really don’t want me to do that. Not only is Egg Fu visually upsetting, he speaks with the most hideous, stereotypical Chinese accent I have ever read in my life. This is the least offensive image I could find of him from his debut appearance, and it’s because he’s barely visible and not speaking.

(If you really feel the need to see the character in his true, uh, “glory,” go here. Warning for all of the racism.)

The pervasive racism (not to mention Wonder Woman’s constant crying over Steve Trevor) makes these issues all but unreadable, which is a shame, because they have some truly inspired plot points. Diana and Steve are literally blown up by an atomic bomb, only to be reconstituted by Amazon technology. It’s fantastic.

Egg Fu also meets a destructive end, as he is crushed to death by Wonder Woman’s lasso. Omelets for everyone!

It’s worth noting that, at the end of Egg Fu’s debut appearance, DC announced they were retiring a lot of Silver Age additions to Wonder Woman’s cast (Wonder Tot, Merman, et. al.) and taking her back to her Golden Age roots. The “whatever” attitude of the ’60s that had allowed Egg Fu to exist was clearly falling out of favor, even at this early date of 1965.

And yet, Egg Fu got to come back.

This isn’t much of an appearance, but it does give us our first glimpse into what Egg Fu actually is and where he comes from…kinda.

Wondy (and Steve Trevor, because she can’t do anything by herself in this era) go in search of a missing atomic submarine, only to find that Egg Fu has taken it. Or rather, Egg Fu the Fifth. The original, it turns out, was indeed destroyed by Wonder Woman, but “not before other Egg Fu’s [sic] had been hatched.”

This raises so many questions. Is there a Mrs. Egg Fu, or do giant eggs reproduce asexually? What does an egg hatch from — a larger egg? What happened to Egg Fu Two, Three, and Four? Were they delicious?

Anyway, Wonder Woman destroys Egg Fu V by dancing at him until the vibrations break him to pieces.

We’re in the 21st century now, and that means some long-overdue changes to Egg Fu’s…everything.

52 was a weekly, year-long series involving many disparate subplots that slowly combined as the weeks wore on. One of those subplots involved the unexplained disappearance of many of the world’s mad scientists, including Dr. Will Magnus, creator of the Metal Men. Issue 25 revealed that Egg Fu was behind the kidnappings. (Astute readers could have figured that out two issues earlier, when Dr. Will Magnus woke up to find himself on Oolong Island.)

Egg Fu’s big plan is to give all these mad scientists unlimited money and drugs so they can come up with scary new weapons for a criminal group called Intergang. But what’s really notable here is that he’s given an actual name — Chung Tzu — and something resembling a personality. It seems he’s a bit sensitive about his “grotesque and ridiculous” appearance, and he hates being called Egg Fu so much that he steals a Monty Python bit to gripe about it.

He also describes himself as a “mutant flesh-machine,” so perhaps he’s not a literal egg after all.

With Egg Fu’s patronage, the scientists design the Four Horsemen, a team of supervillains that murder Black Adam’s family and cause him to go on a global rampage. While Oolong Island is under assault, Magnus reveals that he managed to rebuild his Metal Men under Egg Fu’s nonexistent nose. It ends badly. For Egg Fu, anyway.

As revealed during the “CheckOut” storyline, Egg Fu was reconstructed after being smashed by the Metal Men. In keeping with the nastier tone of Outsiders (and Checkmate, I assume), he was depicted here in a much more viscerally unpleasant way. Before, he was a big-picture guy focused on creating weapons of mass destruction or hiring others who could create such weapons for him. Now, he likes torturing people for funsies — oh, ‘scuse me, I mean “knowledge.”

He escapes capture this time, and that’s the last of his serious appearances. After this, he was parodied a few times in Ambush Bug and Wonder Woman, but his revival doesn’t seem to have gone anywhere.

52 was not Dr. Magnus’s first encounter with Egg Fu, sort of. In Metal Men #20, they encountered his “twin,” Dr. Yes, a reference to another horrible Asian stereotype, Dr. No.

There was also a time when Egg Fu was “revealed” to be a giant computer from Apokolips bent on stealing people’s souls or something? But that never went beyond Wonder Woman #128-129.

I wouldn’t called him an underrated gem so much as an unrealized one.

What really scrambles my eggs about this whole mess is that this could have been a fun idea. If you look at my profiles of King Tut and Big Wheel, you’ll see that I’m a huge fan of stupid villains. The sillier, the better, I say. And a giant egg that wants to take over the world is about as silly as you can possibly get.

But no! They had to slather him in negative stereotypes to the point where he was all but unsalvageable. I give the myriad creators of 52 credit for trying, but he just comes off as a bargain-basement version of Marvel’s M.O.D.O.K.. Worse, it gave the writers of “CheckOut” an excuse to make him a whole new kind of gross, so this was a net zero as far as I’m concerned.

That said, do I think someone could take this concept and turn it into something worthwhile? It may seem weird to say, but I wouldn’t rule it out. Amanda Conner briefly used Egg Fu in her story from Wonder Woman #600, and quite frankly, she is the only creator who seems to understand the assignment when it comes to this guy.

The assignment, of course, should be “mock him to death.” Just have him throw a bunch of increasingly over-the-top weapons at our heroes, who then roast him so hard he throws a tantrum and cracks to pieces. Something fun! And can we please find a character design that isn’t disgusting? There has to be some middle ground between “ugly stereotype” and “just plain ugly,” no?

Anyway, that’s it for me. I’m hungry. I’m gonna go fry some eggs.