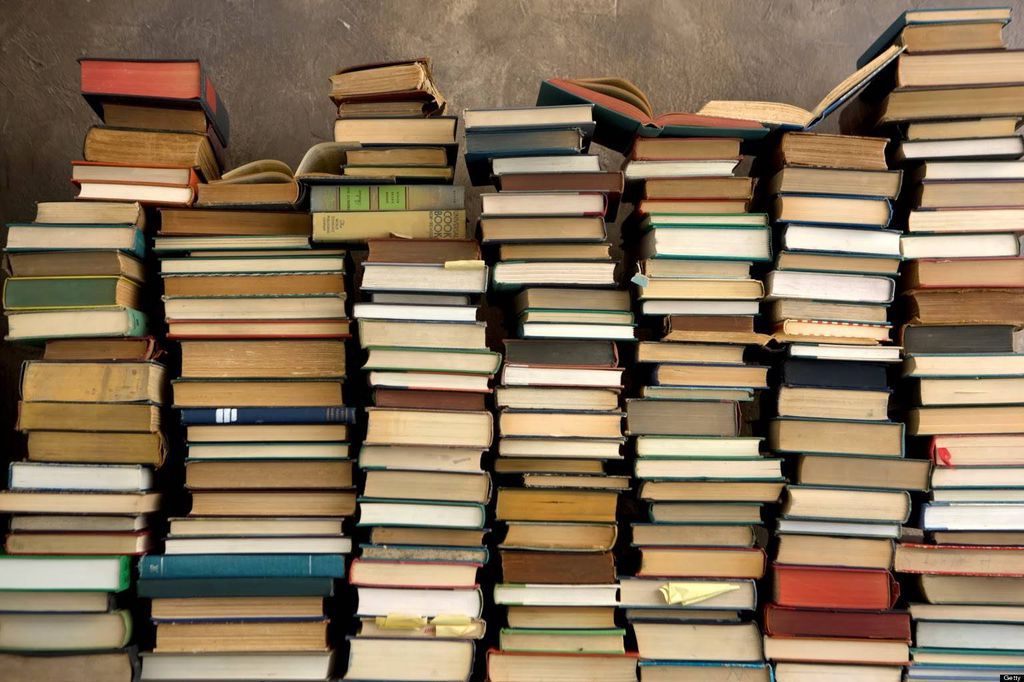 I always imagined, when I finally became a “Distinguished Professorial Personage,” that I would blanket my office in books. Even the door. Books on the floor next to my desk, books on the desk, books on top of chairs and the windowsill and lamps. Books spilling out of my door and into the hallway, into other professors’ offices. This was my dream.

Well, friends, I never did become a “DPP,” but I did find an office like the one I just described. It doesn’t matter that it isn’t mine– it’s just good to know that it exists.

It’s Professor E’s office, and no one who’s visited it will ever forget it.

I met Prof. E when I started grad school, and the first time I went to his office hours, I was almost killed by falling books.

For they were stacked up to the ceiling, covering most of the floor. I assure you that I am NOT EXAGGERATING. Prof. E had stuffed so many tall bookcases into his small office that some of them were standing at strange angles to one another. And in all the open spaces, there were books: American literature from the 18th through the 20th centuries, film books, literary criticism, library books, art books, philosophy books, dictionaries, I could go on. Prof. E was one of the most eclectic readers I’ve ever met, and his office reflected that.

So when he invited me to sit down to talk about an upcoming paper I was to write, I looked in vain for an open chair. The two unoccupied chairs were covered in books. He said, “oh, here, let me clear that off,” and shifted a stack twenty-five-books high onto an already existing stack next to his chair.

I gingerly sat down. I tried not to breathe, worried that the groaning bookcase at my back would come crashing down on me at the slightest tremor.

Prof. E started talking about the paper, and gradually I started writing notes and speaking above a whisper. Then, like a girl with a death-wish, I asked him if I should use a particular text as part of my research.

He turned around to his desk (upon which sat about forty books) and accidentally kicked a leg of the chair I was sitting on. That made my foot accidentally hit the stack of about eighty books standing next to me, and it fell over with a mighty crash.

I thought, “well, if I’m going to be crushed, at least it’s with books!”

After a minute, though, I realized that I was still alive, and Prof. E didn’t look surprised by any of it. I started apologizing, and he said not to worry, that kind of bookish avalanche happened all the time.

Then he glanced down at the rubble and, pulling out a book, declared, “hey! I didn’t even know I had this one! I was just about to order it online. What luck!” And he tossed it onto his desk, where it disappeared among its brethren.

I was shaken, but tried to carry on the conversation. And then a terrible thought hit me.

How was I going to get out of that office without causing a complete cascade of books and bookcases? I mean, Prof. E was nice and everything, but I certainly didn’t want to spend hours trapped with him under a pile of Foucault and Austen and Warhol and Walter Benjamin.

Prof. E sent me on my way finally, and, like a cat, I made myself as small as possible and slid out the door, only knocking over a couple of smaller book stacks. I considered that a victory.

And yet, despite the danger of falling books, I felt happy sitting in that office. It was like sitting in a garden among thousands of fragrant flowers, with some hanging right over my head, others curling up under my arm. It was like having hundreds of good friends all around me, freely offering knowledge and joy. I loved the mixture of old and new books, hardcovers and paperbacks, slim books and mammoths.

One day, I shall form my own book alcove in my house and sit in it like a kid in a treehouse. It shall be my bookish retreat. And it will be inspired by Prof. E’s office.