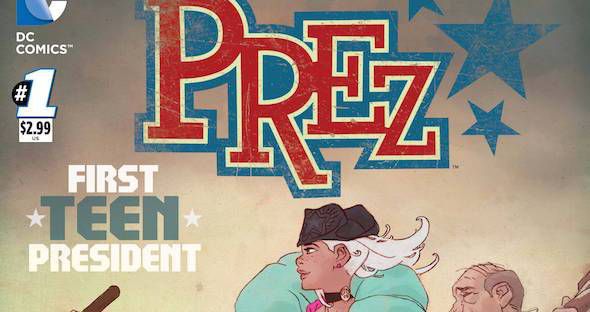 In this never-ending dumpster fire of an election cycle—featuring the two least popular major party candidates in history—it’s easy to become nostalgic for pop culture presidents of the past, such as Jed Bartlet from The West Wing, Laura Roslin from Battlestar Galactica, or even Dwayne Camacho from Idiocracy, who frankly is starting to look pretty good at this point.

Well, you can keep them all. I want to be governed by Beth Ross, a/k/a Corndog Girl, from Prez, by Mark Russell, Ben Caldwell, Mark Morales, and Jeremy Lawson. 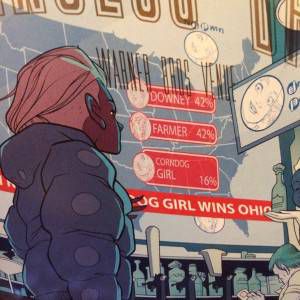 Ross doesn’t even know she’s a candidate until she wins Ohio.

Prez, set in the not-so-distant future of 2036-37, is the story of Beth Ross, a 19-year-old fast food worker, who is unexpectedly elected president after a video of her accidentally burning off her hair in a corndog fryer goes viral on election day.

Not owing anything to anyone and having nothing to fear, Ross assembles the cabinet of your dreams—it includes Neil deGrasse Tyson and Slavoj Žižek as her science advisor and Secretary of State, respectively—and shakes up American policy, foreign and domestic.

In one of her first acts as president, Ross ends a robotic Sentry program (clearly inspired by today’s military drones) after the death of a Pakistani child is caught on camera. Ross, who never gave much thought to the Sentries before, now feels responsible for every death. In a real world where it feels impossible to roll back the post-9/11 security state, Ross’s willingness to do just that is both radical and refreshing. 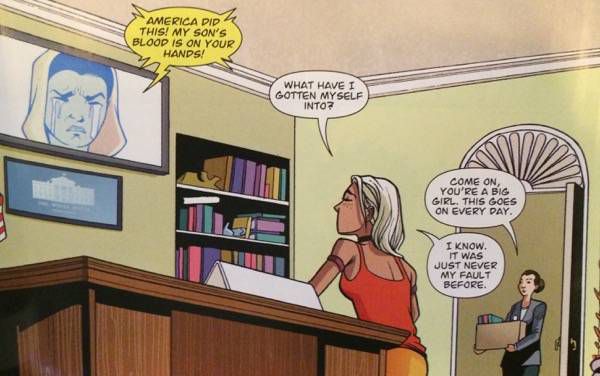 Prez is inspired by a short-lived 1970s comic series of the same name, starring Prez Rickard as the first teen president. (Rickard, who you might also have encountered in the “World’s End” arc of The Sandman, shows up as Ross’s vice president.) But, where the ’70s series was earnest and idealistic, the revival is cynical and satyrical.

Corndog Girl’s world is simultaneously horrifying and all-too-familiar because it extrapolates current trends to their seemingly-inevitable extremes. This is a world where presidential candidates submit to spankings on YouTube as a way to reach a few swing voters in Ohio, where refugees displaced by global warming have been locked in a human zoo, and where Ross’s dad dies of “cat flu” because his job didn’t come with healthcare. 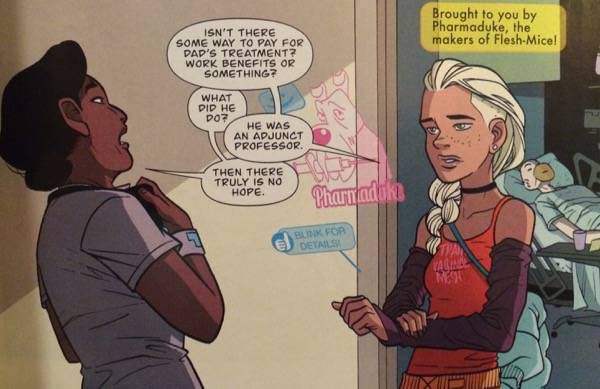 But, while the satire may bite deep, it is also absolutely hilarious. The American political system is skewered, Left and Right. Both parties are basically owned by a cabal of large corporations that never met a crisis it couldn’t exploit. The best running gag, though, is probably the cable news-style talking heads show, where Senator Jay Thorn continually relies on “why do you hate freedom”-style rhetoric to embarrass the opposition. 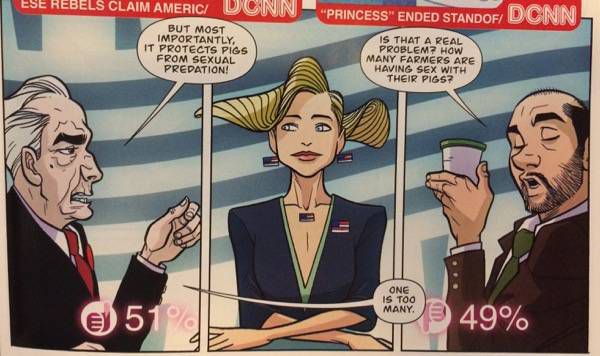 What does the sexual predation of pigs have to do with deregulating pig farms, you ask? Absolutely nothing. Also, check out the four American flags on the show’s host.

Prez shows us a vision of a United States even more screwed up than our own, where there are no easy fixes. But somehow Beth Ross is the perfect president to shake things up. She perfectly blends cynicism with a vision of how things should be. Her inaugural address ends with the sort of statement I wish I heard more from politicians:

We keep making the same mistakes because we’re afraid to imagine alternatives. Fixing this country won’t be easy. And I know I will make mistakes. All I can promise is that they will be new ones.

Ross might not have the answers, but at least she’s asking the right questions.