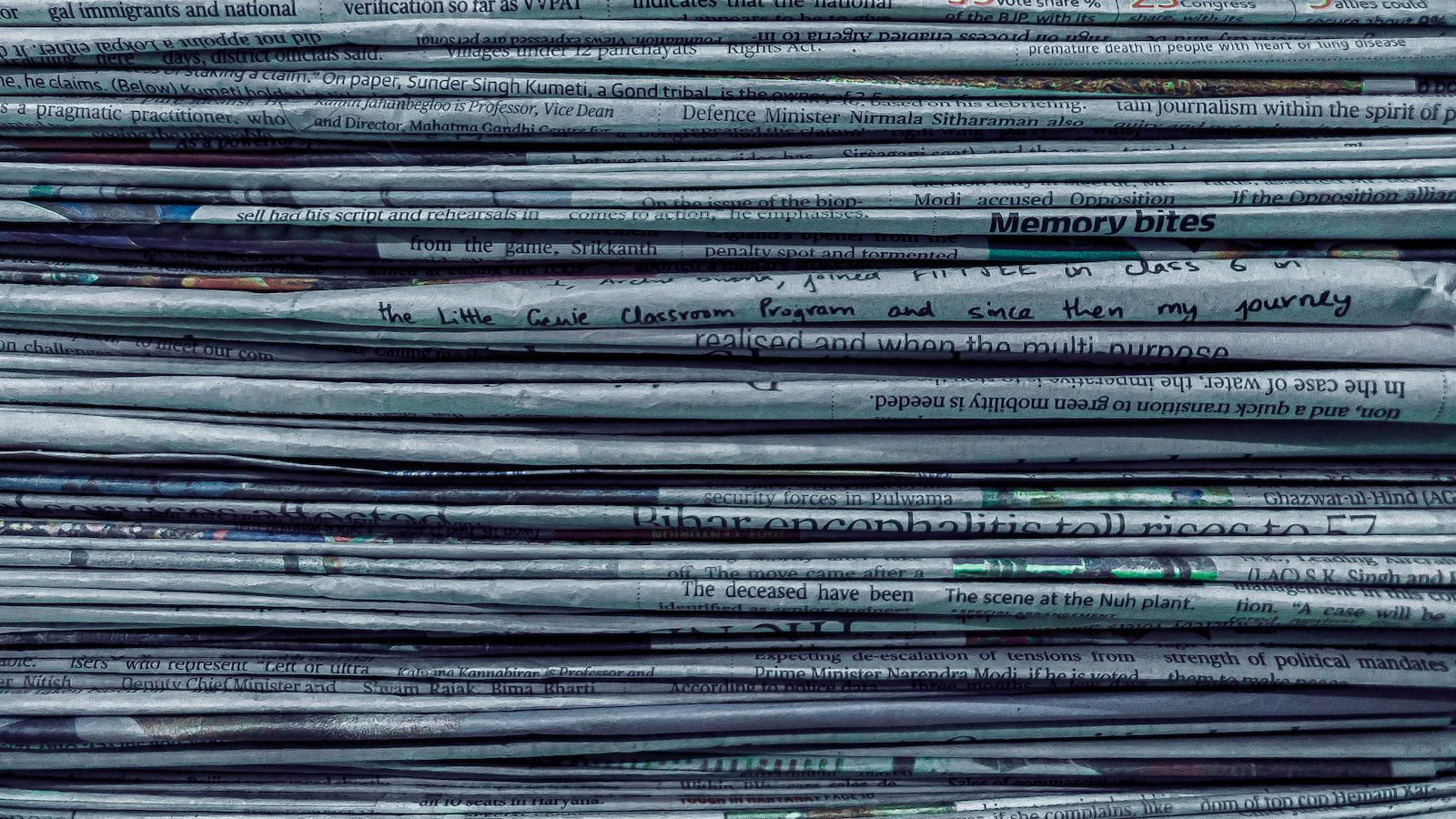 In 1644, John Milton, best known among readers as the author of Paradise Lost, wrote a pamphlet called Areopagitica. In it, he argued forcefully that the British system of government licensing of the press was an insidious form of censorship. He believed that everyone should know the basis of their own opinions and actions — and take responsibility for them. This required an open society, built on discussion, without the interference of authority for its own benefit.

Milton argued for something journalists and readers hold dear: the capacity to make personal choices and decisions, based on well-informed and accessible reporting of fact and free expression of opinion. In other words, we should have a chance to see all the info available before reaching conclusions we then rely on. Doesn’t sound too radical, does it?

I reckon if you ask most regular people on the street, they’re liable to agree that a free press is a core part of a functioning democracy. Most people who express that opinion also likely take it for granted: there are tons of newspapers and magazines, thousands of podcasts, millions of websites, more reading material on a screen than could ever be consumed. Surely Milton’s dream has been fulfilled? But it’s not that simple.

Milton’s Aeropagitica remains a revolutionary document because, almost four centuries since he wrote it, his points remain valid — and in may cases, aspirational. Aeropagitica has been referenced by the Supreme Court in New York Times Co v Sullivan (376 U.S. 254 (1964)), in Eisenstadt v Baird (405 U.S. 438 (1972)), and in Communist Party of the United States v Subversive Activities Control Board (351 U.S. 115 (1956) and 367 U.S. 1 (1961)) — among others. All of these cases have referenced the pamphlet to support a broad protection for free speech and free association.

While U.S. readers will be familiar with first amendment rights, the UK has no constitutional protection for freedom of speech, though it’s a relatively well-entrenched concept. The European Union protects media freedom for all member states and citizens through the European Convention on Human Rights — though ironically the European Convention does allow for licensing, because in a pre-internet world, there was only so much capacity to broadcast and print. Poor Milton would be disgusted.

The United Nation’s 1948 Universal Declaration of Human Rights states that “Everyone has the right to freedom of opinion and expression; this right includes freedom to hold opinions with interference, and to seek, receive, and impart information and ideas though any media regardless of frontiers.” The United Nations General Assembly declared May 3rd as World Press Freedom Day in 1993

It all sounds great in theory, but it’s very different in practice. In the United States, Donald Trump’s presidency generated a war on journalism which has been well-documented. Saudi journalist Jamal Khasshoggi was murdered in Istanbul— according to the CIA, an action directly ordered by Crown Prince Mohammed bin Salman. In early April, the Turkish prosecutor in the Khashoggi case sought its referral back to Riyadh, a move seen by many as an effort by Istanbul to improve relations with the Saudi regime — a moment that doubtless makes every journalist’s blood run cold. In the UK, a journalist has been taken to court in an effort to out his source, the alleged true perpetrator of the Birmingham pub bombings. Looking at these stories together, it feels like freedom of the press is in the trenches and constantly under fire.

There are perceptions that the global north has fewer problems with press freedom. The World Press Freedom Index by Reporters Without Borders (RWB) ranks countries according to a precise methodology each year, and in reality, what it shows is not a divide between global north and south: it shows that the vast majority of the world is a less-than-loving place for journalism. Even at the top of the list, there are warnings. Ireland, at 12, has problems with concentrated media ownership in private hands and prohibitive defamation laws. At 6, The Netherlands suffers from a lack of access to state information. At 2, Finland struggles against the rise of hate speech campaigns on social media networks which leech users and trust from mainstream sources. Jamaica and Costa Rica are both in the top ten, with the United Kingdom ranked at 22, the United States at 44 and China at 177, just a handful of steps up from Eritrea in last place at 180 — this last place spot is an example of a traditional dictatorship in control of all press.

Milton saw a world where government had too much power to censor, a reality we’ve seen borne out through every dictatorship and war over generations — but there’s a lot more to it now than just governments. The RWB rankings make this clear, with problems becoming more complex over time in so-called “developed” nations. While there are still issues like those in Eritrea and North Korea where the government has full control, press freedom issues are more and more stemming from the hard fists of the well-moneyed.

Oliver Bullough’s Moneyland and Butler to the World explain a long history of well-connected oligarchs utilising laws in the UK to shut down reporting on their assets and corruption. Author Catherine Belton’s Putin’s People was subject to a “barrage of litigation” from oligarchs over her book. The private elite are a significant threat to press freedom all on their own — and sometimes, they can’t even see the reality, as in the case of Elon Musk.

At the time of writing, Musk has bid for a majority stake in Twitter, and he refers to himself as a “free speech absolutionist.” According to Pew Research, 23% of Americans use Twitter, with 70% of those using Twitter to get breaking news. Two thirds of news users on Twitter have “at least some trust” in the platform. Twitter has become a part of the press and is, in general, much more trusted than other social media platforms.

Musk’s “free speech” promise seems a double-edged sword even with a cursory glance. Given his companies’ connections to government contractors, it would be easy for those governments to financially pressure him to suppress criticism on the platform — in fact, on April 26th, just hours after the acquisition was agreed, Musk was already tweeting about free speech “which matches the law,” a massive move away from “free speech absolutism.”

There’s no telling how Musk’s own views would impact the publishing of news on the bird app. There’s a risk that his interpretation of “free speech” might lead to a proliferation of unmoderated fake news, diluting hard-earned trust in reliable journalism. What if we see the dawn of algorithms that favor clickbait “journalism” from Twitter armchair experts with no credentials? These things are already risks on the platform, and the notion of them getting worse is legitimately concerning.

We’ve seen the problems of private ownership in media elsewhere. With the Russian invasion of Ukraine, economic sanctions have increased significantly. In the UK, the Prime Minister’s close connections to Egeny Lebedev are being examined by commentators. Lebedev owns the Evening Standard and The Independent and was nominated for a life peerage by Boris Johnson in 2020, despite national fears about Lebedev’s father Alexander, a former KGB man.

You can’t mention this without talking about Rupert Murdoch of News Corp. In Bruce Page’s The Murdoch Archipelago, the author presents Murdoch as a kingmaker, his influence unbound across multiple continents. The New York Times has noted his influence on the Brexit referendum, his political influence in Australia, and his deep impact on the Republican Party.

Private owners have their own biases, opinions, and goals. Musk can’t see that his owning Twitter could make it a political football — and publishers like Murdoch have long been willing to use their media assets to consolidate power as they see fit. No matter which way you look at it, Milton’s original fears are very much alive — and very much advanced.

Looking at it on the surface, press freedom got a lot better with the introduction of the internet and a fall-off in numbers of dictators in the 1990s. The internet increased accessibility, and publishing through blogs became a precursor to the internet we now use every day. Arguably, the internet allows us to be more aware of the problems with press freedom. When I was a teenager in Ireland, internet use was limited to 15 minutes of dial-up each night. If we still lived in that world, I mightn’t know that the Taliban’s takeover in Afghanistan has led to the closure of 40% of media, with 80% of women journalists now out of work. UNESCO say that 55 journalists and media workers were killed in 2021, and note that 87% of killings like these since 2006 have been unresolved. And that’s before we mention imprisonment, physical attacks, and intimidation. The Committee to Protect Journalists tracks deaths like these, and has confirmed motives for 27 deaths in 2021: the vast majority are murders, with a trickle of inherently dangerous assignments and crossfire on the list. I wouldn’t know any of it without the internet.

In 1998, 25% of Americans trusted news on the internet, when the internet user pool was relatively small. In 2019, that had risen to 40%, which is still well short of a majority. Local television, local newspapers, and local radio remain most trusted, along with discussions with friends and family, but fewer than half of Americans trust national newspapers and networks like CNN and Fox News. The internet might have given us more information, but looking at the big picture, our trust in almost every type of information except the stuff made in our own backyards seems to be falling.

Almost everyone I know agrees with the basic tenet of freedom of the press. In the old days, press suppression was about criminal conspiracy and government over-reach, but today it’s even more insidious: there are plenty of people on the street who believe the press is bad and that mainstream media can’t be trusted. The term “fake news” is applied to both literal fake news and news that some people want to shut down. People on the left and the right have different reasons for not trusting the modern media, and the dominant private ownership of late-stage capitalism has entrenched in many of us a belief that the press does not have the public interest at heart. And when you think about it, those collective problems stamp all over press freedom in a way John Milton could never have considered.

Press Freedom Day remains a vital awareness-raiser, especially since its basic purpose has shifted into a more complex and difficult conversation in the past few years. If you don’t buy newspapers or subscribe online, maybe it feels like this issue is far removed from your reality, but longform investigative journalism makes for some brilliant non-fiction books— think Dopesick, Bad Blood and The New Jim Crow. Journalism has produced some of the best and most urgent writing out there, educating the world despite all the effort thrown against it.

According to the United Nations, May 3rd “acts as a reminder to governments of the need to respect their commitment to press freedom and is also a day of reflection among media professionals about issues of press freedom and professional ethics…. World Press Freedom Day is a day of support for media which are targets for the restraint, or abolition, of press freedom. It is also a day of remembrance for those journalists who lost their lives in the pursuit of a story.” Perhaps the definition needs to expand for a new world, but the premise remains vital.