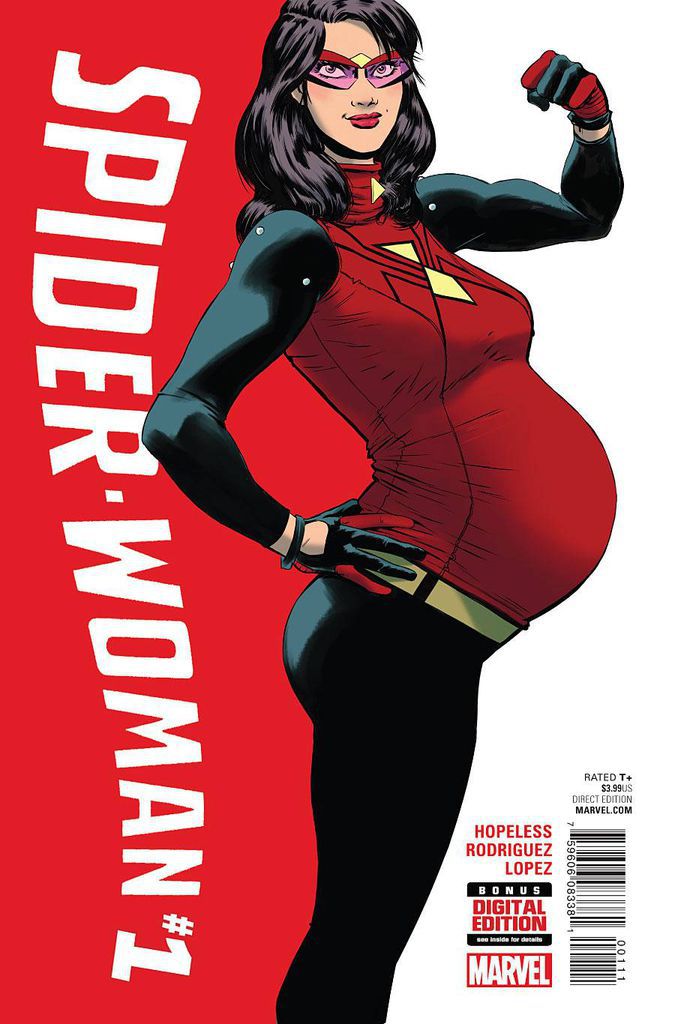 When Marvel announced that Spider-Woman would look…a bit different in her post-Secret Wars title, there were some concerns.

And those concerns were fair for two reasons:

How many times did we have pregnancy used as a plot device, or a gimmick? How many of those were “pregancies against her will” stories? It also doesn’t help that those behind the Spider-Woman book are men which only increases the worry that our female superhero’s pregnancy will be grossly missed handled. Despite the fact that I think the Spider-Woman team is fantastic in what they’ve been able to accomplish so far, history has taught me that female characters in superhero comics eventually get shafted.

After reading the new #1 issue, I can say that my worries have disappeared.

@ReverendMagnett So much that she deserves a co-writing credit.

It was quite evident that Hopeless consulted his wife in the writing of pregnant Spider-Woman. Jessica Drew was still her sarcastic self, and even mentioned her earlier stance on children (a very strong NO), but she didn’t feel like a completely different person because she was pregnant. At the same time, she knew she had to alter her life because pregnancy demands that.

It was great to see her best pal, Carol Danvers aka Captain Marvel, offering her support along with her partners in superheroing, Ben Urich, and Porcupine. Seeing her mentorship/mentee relationship with Porcupine grow, and deepen from the pre-Secret Wars series was a delight as she got ready to go on superhero maternity leave. Speaking of Secret Wars, I was impressed by how the issue was still able to keep the fans (like me) who weren’t following Secret Wars the last few weeks. It’s so intrusive when crossover events affect the enjoyment of your favourite titles.

Overall, I’m really glad that I could still thoroughly enjoy the series. I’m glad the same crew returned because I can’t imagine Dennis Hopeless’ Jessica Drew without the talented Javier Rodriguez, Muntsa Vicente, and Alvaro Lopez bringing her to life. I’m excited to see Jess balance her role as Spider-Woman with motherhood.