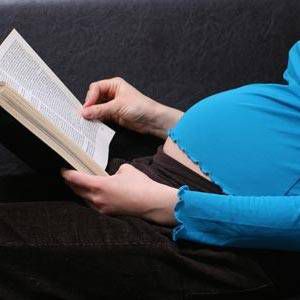 Week 4: Ok, I’ve been feeling funny all week — a little nauseated, a little emotional — and when I went to the doctor she spooked me by running a test for gerunds. I mean, okay, I’m not always 100% on using the dustcovers properly, but I wasn’t expecting her to tell me what she said next: “You’re pregnant. And it looks like you’re carrying literary.”

What am I going to do?

Week 6: According to the doctor, at this stage the subjects and predicates are dividing like crazy; all I know is, I’m tired all the time and way too warm. It’s about time I started thinking seriously about telling the father, but I have to be honest with you: there were a lot of libraries, and Book Expo with that one David Mitchell signing line, and then that drunken three-day Amazon blitz. I don’t really know who to call.

Week 11: The book is finally able to produce its own similes and the resulting nausea is like the flow of waves against the shore of my soul, which is like a lost boat on the ocean of life, which escapes me like that guy who swam away from The Rock and they never found. I hope similes give way to metaphors soon, or I’m going to puke up another batch of semicolons and I haven’t gotten the stain off the rug from last time yet.

Week 12: Now that I’m feeling a little more confident about the viability of this manuscript, I’ve started telling people. They all assure me they’re going to help me once the book is published, but I promised that to so many of my friends and then stopped responding to launch party invites on Facebook so I guess we’ll see. I’m thinking about self-publishing and hiring a local holistic publicist, but my friends all say a proper publishing house with a trained staff is a better idea. I can’t decide.

I went for the ultrasound today, and it’s official: it’s the Great American Novel. Which means it probably was Franzen, damn it.

I don’t even know how I’m going to explain this to people. I’m Canadian! And I like popular fiction! But I was pretty heavy into exceptionalism for a while there and I guess there are consequences for youthful indiscretion.

Week 19: I just felt the pages turn! I guess this is really happening. The girls are getting ready to throw me a shower so I’m going to make an appointment to register at Powell’s in the morning. I’m kind of hoping people just send cash, though — the publicist is talking about a three-week blog tour after delivery and I have no idea when I’ll be able to get back to work.

Week 22: According to the doctor, the manuscript has just developed taste, so take that New York Times. I’m pretty uncomfortable all the time but I’ve gained three cup sizes, which is great except that my coffee doesn’t fit in the holder in my Suzuki anymore.

Week 24: I SWEAR TO MARGARET ATWOOD I AM IN LABOUR but everyone tells me it’s not the final draft yet. Easy for them to say. Apparently, these are Braxton-Hicks revisions, and they can continue right up until publication day. I’m stressed because I’ve added far, far more pages than the doctor advised and I’m never going to be able to deliver this behemoth.

And did I mention my HMO is Amazon?

Week 31: The manuscript is squeezing my bladder to the side and I now pee whenever I think of ways to punch up the funny scenes.

Week 34: I haven’t slept in three days and my legs are covered in varicose veins but I finally finished putting together the bookshelf I bought for the manuscript. I can’t quite manage to lift the damn thing, though, so right now it’s sitting on the floor of my apartment kitchen and I can’t get to the fridge. Probably not a bad thing considering the brutal heartburn I’ve had for two weeks. I keep burping up dangling modifiers. It’s super gross.

Week 41: A full week behind schedule but finally the publication date is here, and not a moment too soon. Labour took 72 hours and let me tell you: I need never experience uncut pages, deckled edging, or sewing through the fold again, thankyouverymuch. But the manuscript emerged, healthy and whole and — if you can believe it — 700 pages of man-against-himself mythos. I look at it in its snuggly new cover and all I can see is possibility. I love it, after everything. And maybe, in a small way, I love Franzen too.

No. Not that last thing.

Goddamnit. I know some blogger bitch is just going to give this book a three-star review. Doesn’t she know this book is my baby?