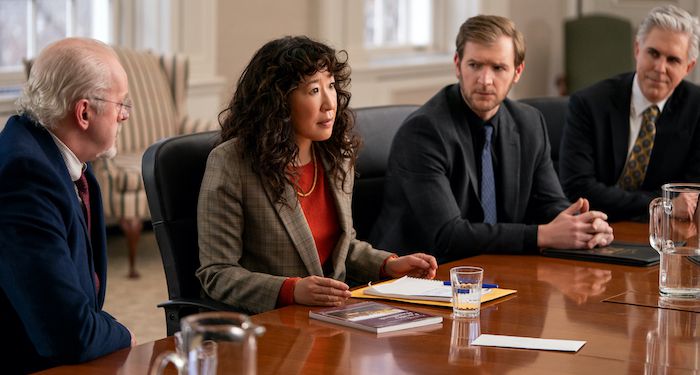 I don’t keep up with new movie or TV show releases like I used to. The beauty of streaming services is that the announcements will be in my face the second I sign into my account. So, it was a weekend like any other. I’d come back home after having brunch at an insta-popular place with a friend. You know, a place with terrible parking and limited but photogenic menu options (it was good, though). I got back home and was ready to spend an ungodly amount of time scrolling through Netflix when I saw Sandra Oh’s welcome face announcing a show about an English department. Bingo.

As an English major, I was elated. It was nice to finally be seen, because I feel like we’re ridiculed a little too much for our love of symbolism about green lights and Jane Austen and the Oxford comma. I know it’s wonderful to see shows and movies about females taking names in STEM classrooms, but I honestly hated studying biology, so I was just tickled to watch an English department being depicted on screen.

Now some background: I didn’t go to a school known for its humanities programs. In fact, I attended my alma mater specifically because it was known for its STEM programs, which served as feeders for medical, dental, physical therapy, and optometry school as well as various PhD programs.

Being the reader I was (and still am), I couldn’t help but take English literature courses, which then culminated into a second degree that I thought I’d never use (I was wrong). So I wound up doing a double major and now am the proud owner of a BS in Biology and a BA in English. (Guess which one my parents made me do and which one I chose for myself.)

It’s probably a good time to mention that my alma mater is in Alabama and (if my name wasn’t an indication) that I’m Indian American. The place and race (rhyming unintentional but clearly necessary) played key roles in my classroom experiences. For one, I remember my STEM courses being extremely diverse, even though we were in Alabama. Alternatively, my English literature courses were a bit more homogenous, not just in the classroom makeup, but also in what was taught.

I remember the stark difference between walking into my first chemistry class and being surprised at the sheer diversity in the lecture hall. After attending high school in Mississippi, it was nice to “fit in.” But this feeling was immediately taken away when I walked into my first English class, and I was one of two people of color. I found this contrast to be odd, but it made some sense: the STEM courses were filled with the children of immigrants, first-generation college students, and various other groups of students who saw STEM as a way to advance their careers. (I thoroughly acknowledge that this is a generalization, but this was my experience.)

On the other hand, those who take English courses know that their career paths aren’t laid out in the same way. As such, it’s people who’re encouraged to follow their passions. More times than not, this meant that the classes were predominantly white. I remember feeling odd about this at first, especially since I was almost always the only Indian American in the classroom. However, while my professors and peers were nothing short of wonderful, it was the material itself that always gave me mixed feelings.

In The Chair, one of the first conflicts I found myself relating to was the tension between Dr. Elliot Rentz, an old white Melville scholar, and Dr. Yaz McKay, a young Black professor. Dr. Rentz used to fill up classrooms, but now can barely hold the attention of a handful of students during his sermonic lectures behind a podium. Dr. McKay, on the other hand, can barely contain the excitement of her students who respond to her modern, multimodal approach.

As a student, I constantly saw my professors attempting to “make the texts relevant” to modern sensibilities. Of course, more times than not, this fell short. I vividly remember reading The Merchant of Venice during a seminar in which (spoiler alert) Shylock, a Jewish moneylender, unsuccessfully takes Antonio, a Christian who cannot pay back a loan, to court. Long story short, Shylock is outwitted in court and must convert to Christianity. Now this forced conversation obviously is problematic on every level imaginable.

However, when the class was discussing Shylock’s forced conversion, some voiced how this could’ve been a positive because apparently an Elizabethan audience would’ve thought that now he could be accepted into mainstream Venetian society. It was never mentioned that Shylock would then lose his own community and the social hurdles he’ll face to assimilate.

As a Hindu living in the Deep South, I was constantly faced with Evangelical Christians determined to convert me, explicitly or implicitly. This discussion of Shylock’s forced conversion struck a cord and made me realize that while I was reading a play by one of the greatest English writers of all time, I was also reading a play written by a man whose nation will one day colonize my motherland and impose its religious values on it.

Now, there have been plenty of thinkpieces about loving problematic works of art and artists. But remember that I was in college and just trying to get into grad school. Fortunately, my professors and peers in the English department, despite living in Birmingham, Alabama, always welcomed my critiques and openly encouraged me to explore my interpretations of various texts. To be fair to them, my English seminars were far more open and welcoming than my STEM ones.

Some of my favorite scenes in The Chair are watching Dr. McKay and Sandra Oh’s character, Dr. Ji-Yoon Kim, lecture in their respective classrooms. Dr. McKay is full of life, and her lectures almost feel like a town hall in which everyone cares and has something to say. Dr. Kim’s are more traditional but encourage students to thoughtfully engage with various texts.

I’ve had both experiences in my classes and while pretty much all of my professors, save for one, were white, it was interesting to see them attempting to engage students. That said, as you may have guessed from The Merchant of Venice debacle, it was tricky for me to fully relate to many texts.

It really wasn’t until I took a class on Black literary realism, with the only Black professor I ever had the fortune of studying under, that I finally was able to openly read about and critique the role of race in literature. It was a revelation to finally read Native Son, The Street, and Black No More. More than anything, these books answered and invited questions that I’d been longing to engage with.

Looking back at the classes that were offered, such as literature of the Protestant Reformation, Victorian literature, and modern American plays, you can guess who wrote most of the literature on my reading list. Jane Austen, Thomas Mallory, Charles Dickens, Arthur Miller. While I am infinitely grateful to have read works by these writers, I had to take a dedicated class to read Black literature and never even touched a book by an Asian, much less Indian, author while in school.

Looking back at my own experience and the books I read, which was everything from the aforementioned The Merchant of Venice to David Copperfield to The Crucible to [insert book by legendary white author], I was always on the outside looking in. It really took me until my late 20s to finally start reading books by Indian American authors and other BIPOC authors.

I should have been introduced to all these authors while in school (goodness only knows that I paid the school enough for that).

My only hope is that shows like The Chair keep shedding light on the huge dark gaps in English department syllabi so that future students can see themselves in the literature.