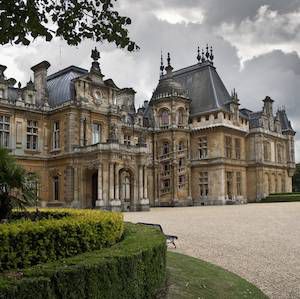 This is a guest post from Johanna Lane. Johanna was brought up in Ireland, studied English Literature at the University of St. Andrews in Scotland and Creative Writing at Columbia’s MFA program. Her first novel, Black Lake, is out now with Little, Brown.

Every Sunday when I was a child, my family drove from our Dublin suburb to County Wicklow, to the house that my maternal ancestors built in the 17th Century, and re-built after it had been destroyed by a fire in the 19th. Leaving behind the busy city, my parents, brothers, and I passed through the gates and up the oak-shaded avenue, until the house emerged. Then we went back in time.

My grandmother and my great aunt waited for us with afternoon tea: cakes and sandwiches spread out on the long, mahogany table in the dining-room. We were not, on those afternoons, children of the 1980’s; at that table, we were children of a much earlier time. We knew we had to behave. No one had to tell us this; it was written on the centuries’ old walls, the heavy furniture, the enormous gilt-edged mirror hanging at the end of the room, a room that hadn’t changed since my great, great grandparents were alive.

After tea, when the weather was good, we played outside. The gardens were a warren of flowerbeds and hedges and fruit trees, a perfect place for hide and seek. When the rain forced us indoors, the house was almost as full of possibilities as the gardens, but I didn’t like to be alone there. I was certain that the ghosts of my ancestors were watching me as I ran down those halls, their halls. I still remember one of the most frightening moments of my life, a cousin locking me in the upstairs drawing-room with the lights off. I felt a terror I haven’t felt since, even on the rockiest of flights or nearest of highway misses.

The house was sold when I was twelve. I was too young to realize what we were losing, but by the time I’d finished college and moved to New York in 2001, I had become obsessed with Irish “big house” novels: Elizabeth Bowen’s The Last September and JG Farrell’s Troubles in particular (both tell of the decline of the loathed Anglo-Irish, the English invaders from whom my family were descended). But I loved any novel that focused on a special house- Waugh’s Brideshead Revisited, Forster’s Howard’s End, Ishiguro’s The Remains of the Day– or that had simply been imbued with specialness by its inhabitants, like the seaside cottage in which the Ramsays vacation in To The Lighthouse.

These books worked on two levels for me. I was coming to terms as an adult with the loss of a house that had been a member of my family, perhaps the most important member because it had outlived us all. In turn, the houses in the novels I loved were as much characters as the characters themselves.

I was also taking refuge. New York was hot, loud, and confusing and, two weeks after I arrived, the victim of a horrifying terrorist attack. When I had to come up with a thesis project for my MFA, what came most naturally was a book based on my childhood, but with a contemporary twist: a thoroughly modern Dublin woman marries a man from a big house and brings all her class awareness with her. And when they can no longer afford to keep the estate going, it becomes a tourist attraction, allowing the descendants of the very people from whom the land was stolen to visit and roam the estate at will.

Some of the traditional great house novels have fallen out of fashion: a dog-eared copy of Daphne Du Maurier’s Rebecca that I picked up in a used bookstore in California a couple of weeks ago is a good example. I had never read the book, though when I took the boat to Mandalay in central Burma last year, almost everyone I told about my trip quoted- wrongly- the opening line: “Last night I dreamt I went to Mandalay again” (in fact, the house in Rebecca is called “Manderley”). But it shows how much this novel has entered our collective literary consciousness. Rebecca is famous for its spooky plot, narrated by the second Mrs. de Winter, who spends the novel asking what really happened to her predecessor. But for me the star attraction was Manderley, which plays such an important role in the novel that it could as easily have been named after the house: “… there it was, the Manderley I had expected…A thing of grace and beauty, exquisite and faultless, lovelier even than I had ever dreamed, built in its hollow of smooth grassland and mossy lawns, the terraces sloping to the gardens and the gardens to the sea.” Though the plot kept me turning the pages and begging my husband not to turn out the light just yet, it was Manderley that interested me most, it was Manderley I wanted to explore.

It is in part the portrayal of the haves and have-nots that has made these novels less fashionable than they once were; our 21st Century sensibility bristles at the social inequality they represent. Even if most of the families get their comeuppance by the end, their leisured lives are only possible because a multitude of servants scurry about to make them so. Often the servants live relatively miserable existences, with little time off and no home of their own; they are invisible, which is the most telling commentary of all. Mrs. Danvers, Manderley’s housekeeper, is a rare exception. She has power, and when she loses it, she takes her revenge. More often, the servants are portrayed as desperately-loyal lifers, like Stevens, the butler in The Remains of the Day.

But the attraction of these novels is partly because the rhythms of life in great houses are so very different from the rhythms of our own: The characters linger over breakfast, they take long walks in the gardens, they stop for lunch, they stop again for afternoon tea, they talk to each other without constantly checking their iPhones. There is no commute, there is no email, Twitter, Instagram or Facebook, no TV, no noise. They dress for dinner- and in a time where many of us are in our sweats by that point in the evening, who wouldn’t admire that kind of glamor? Just as when I was a little girl, pulling my great-grandmother’s clothes out of the chest of drawers in the hall, careful not to rip the delicate lace, when I put an Ostrich plume in my hair, lifted my skirts, and admired myself in the mirror, these books allow us to try on the past to see how it looked.