Frank Herbert’s grand space opera Dune grabbed me at a young age. The first time I read it for the adventure and fantasy. In later readings I focused on the politics – environmental, colonial, and otherwise. The role of women grabbed my attention in subsequent readings. The wives and concubines all got kind of a raw deal, and after they sacrificed so much.

I reread mysteries even though after the reading it once I know who did it and why. It is the journey that counts. One journey I have taken several times is that of Murder, Murder Little Star by Marian Babson. I picked it up a garage sale in middle school and read it more times than I can remember over the next ten years or so. Not to spoil the story too much, but there is a young character who turns out not to be so young, or at least not as young as everyone thinks. Reading this book as a teenager I thought how odd it was for a girl/woman to pretend to be younger than she was. It was one of the first books that got me thinking about women and ageism, something that completely passed by me the first time I read it.

The first time I read A Raisin in the Sun by Lorraine Hansberry I was simply stunned. It was the first play I read with characters who looked like me and that was written by a person who looked like me. Each time I read it a different character grabbed hold of me. Sometimes it was Beneatha with her college dreams – something I could relate to. Other times it was her Nigerian boyfriend who questions dependence on insurance money received as the result of a man’s death. Sometimes it was the ambitious and frustrated Walter Lee or his strong but quiet wife Ruth. Hansberry’s informal autobiography To Be Young, Gifted and Black was nothing short of eye opening and inspirational. I could go on for pages about Hansberry. Suffice to say I read and reread Hansberry’s work throughout my teens and twenties. 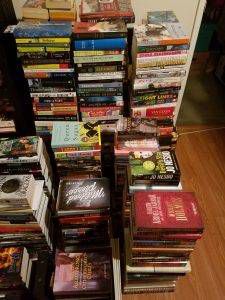 Rereading has become more difficult in the last few years. Between becoming a librarian, book club, and the opening of a new independent bookstore in my city, my pile of unread books is three times the size it was two years ago. It is hard to justify rereading with an unread pile practically stacked up to the ceiling. Plus there are just so many new books coming out. No doubt that was always the case but librarianship, podcasts, and sites like Book Riot have made me more aware of the oodles and oodles of new books published every year, no every week. What’s funny is that I am still always a year or more behind the new books. Almost none of the books I read in 2016 were published in 2016.

In 2016 I reread The Magicians by Lev Grossman. I wanted to finish trilogy but didn’t remember the details of the first book. Rereading The Magicians reminded me of the benefits of a second read. There are fewer surprises but there’s more context, at least it feels that way. It can also be illuminating to check one’s reactions at different points in life. Reading journals are a great tool for this. What wowed me during the first read sometimes barely registers the second or third time around.

Nowadays rereading rarely feels like an option. I have to whittle down my unread pile. Nevertheless I reread, but instead of whole books I revisit pages, sometimes just paragraphs. “Fear is the mind killer” from Dune is a frequent revisit. It helps that I write in my books. I know, I know this is heresy to some. But as far as I’m concerned if I own a book I can do what I want with it, and that includes underlining, affixing multicolored flags, and writing in the margins. I also note the page number of the moving passages on the title page for easy reference.

Of course rereading a page or even a chapter isn’t the same as rereading an entire book. Someday I hope to actually reread some of my favorites again. Who knows if that day will ever come? In the meantime rereading a paragraph, a page, or chapter will have to do.