The internet is abuzz with people, especially people that identify as women, telling their stories of sexual harassment and assault with the hashtag #metoo. The stated goal is to display exactly how many people have been sexually harassed and/or assaulted. To fill the feed of nonbelievers and naysayers with the reality of how scummy powerful people are abusing their position. I could not, for the life of me, figure out why I was feeling so angry about the mere existence of the hashtag. It wasn’t because of the reality it proved. I’ve been living that reality. It was no shock to me to see that all of my female identifying friends and a few of my male identifying friends have been sexually assaulted or harassed. Such is the world we live in, such is the fight we’ve been fighting. No, I was angry because books and stories have proved to me that everybody already knows this problem exists and because I’ve been reading the stories too, I know they know. The victims hash tagging as one more shout into the void of a racist, sexist, homophobic system that gives the purveyors of that system an excuse to continue lying to themselves. 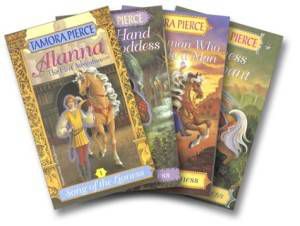 My favorite author when I was little was Tamora Pierce. The world in which a little girl wants to become a knight but has to pretend to be a boy in order to do so was entirely believable to me. Of course it was, I was all of ten years old and I understood that men were allowed to do things that women weren’t. The revelation of that story was that people continued to support Alanna when they found out she was a girl. The revelation was that there were people that exist that would help fight the system from within and, ultimately, the most powerful would come to see reason. So, at the age of ten a story managed to both confirm my worst suspicions about how the world functioned and spurred me to keep doing whatever the hell I wanted in spite of it.

What of the “boy” books? What of the “adult” books? I would like to believe that everybody understands that boys should be reading books with girls as the protagonist and that one of the perks of being an adult is you can read whatever you want. Unfortunately, there are people with qualms about diversifying their bookshelves, so I’ll ask you to think of your absolute all-time favorite book, or if you’re not a reader, your favorite story, be it movie, video game, or that one story your uncle tells every Thanksgiving. How do those worlds function? How is sex used? How is the minority treated? Is there a minority? Is there an “other”? Does it match your own reality? Does your favorite character have power? Lose power? Read and think critically because even the stories that aren’t specifically about the power structure and how we function within it have some sort of power structure in them. Invariably, it mirrors our own. Stories need conflict and conflict almost always comes from a shift in power. Even if someone is choosing to act like they’ve never seen problems with how society beats down and oppresses people in their day to day life…they’ve certainly been exposed to stories about it.

Books have taught me that the problems within our various institutions don’t continue to exist because nobody sees them. Everybody sees them. Those who pretend they don’t are benefitting from them. The fact of stories, is that they come from us. The really good ones…the ones we love, come from truth. Which means that anyone who says they don’t see harassment, sexual or otherwise, are lying, because it is a truth of our society. I don’t think they’re lying to me when they say they didn’t know that I carry my keys between my fingers when walking at night because I’ve had men follow me down the street asking me why I’m such a bitch and won’t go home with them. I don’t think people are lying when they tell me they didn’t know that I’ve had coworkers and supposed friends grab my ass. I think they’re lying to themselves about the reality they’re living in. They’re choosing to believe that stories are always completely made up. They choose to ignore that fiction speaks the very truths the power structure is trying to sweep under the rug. It is a choice. Which means a deluge of people opening up old wounds is just giving the willingly blind an out to say how shocked they are, how astounded and upset it makes them to finally learn this brand new information. So…  #metoo. But you already knew that and if your first instinct was to say you didn’t, then you are the problem. Open your eyes. Go read a book.