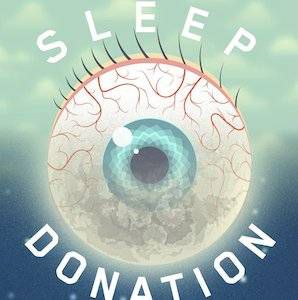 A crisis has swept America. Hundreds of thousands have lost the ability to sleep. Enter the Slumber Corps, an organization that urges healthy dreamers to donate sleep to an insomniac. Under the wealthy and enigmatic Storch brothers the Corps’ reach has grown, with outposts in every major US city. Trish Edgewater, whose sister Dori was one of the first victims of the lethal insomnia, has spent the past seven years recruiting for the Corps. But Trish’s faith in the organization and in her own motives begins to falter when she is confronted by “Baby A,” the first universal sleep donor, and the mysterious “Donor Y.” Sleep Donation explores a world facing the end of sleep as we know it, where “Night Worlds” offer black market remedies to the desperate and sleep deprived, and where even the act of making a gift is not as simple as it appears. [publisher’s synopsis]

“Max Gladstone is one of the newest and most compelling voices in recent fantasy literature, and having read the three books he has written so far, there’s no surprise why: His cutting, beautiful prose and his stellar worldbuilding bring the fantastic universe he’s made come to a fully realized life, his plots are rock solid, airtight, and move at a pace that I can only describe as lightning-strikes-from-the-sky fast and his work demands consideration of faith, relationships, family, power and art but never at the cost of accessibility.

Gladstone, for my money, succeeds because he takes fantasy literature to a place where it has only hinted at, by not only flatly rejecting the standard tropes and stereotypes of the genre but also by embracing and exploring diversity in every facet of his writing.”

“Jordan’s three book series (or 3.5 book series, there’s an eBook short) introduces readers to a love story between the hunted and the hunter.

The hunted? A woman who can shift from human to dragon. The hunter? A handsome man who is sworn to hunt down her kind.

This is a series that’s been on my reading list for a while, and with a movie in the works, I should probably get into them soon. You too!”

-Recommended by Eric Smith in Read This, Then That: TALKER 25 and Other Fantastic YA Dragon Tales

“The story centers on a young woman who gets thrown into the war and discovers horrifying secrets surrounding the government, military, and media. She, with the reader, discovers the world is a very cruel, very dark place. It’s like The Hunger Games and the movie Reign of Fire had a baby, a baby that’s incredibly violent and leaves you feeling broken and sad. Seriously, this book brought the heartbreak.

I seriously cannot recommend it enough. I’ve never read anything quite like it, and I’ll be first in line for the sequel.”

-Recommended by Eric Smith in Read This, Then That: TALKER 25 and Other Fantastic YA Dragon Tales

“I felt possessed by Geek Love even as I was reading it. Not in that “I pick up this book every time I have five free minutes and I’m not going to sleep until I get to that very last page where the publishing company gives you a brief history of the novel’s typeface” kind of way (although that is absolutely how I read this book and all books I like). As in even when I wasn’t reading this book I was thinking about it, and when I was reading this book I could  feel it seep into my skin. I actually at one point remember thinking while reading, “This book no longer exists on the surface of my skin. It’s sunk in. I can’t brush it off, scrape it clean, rub it away, you can’t do those things to something that’s managed to worm its way inside of you.”

-Recommended by Kit Steinkellner in When’s the Last Time You Were Haunted By a Book?