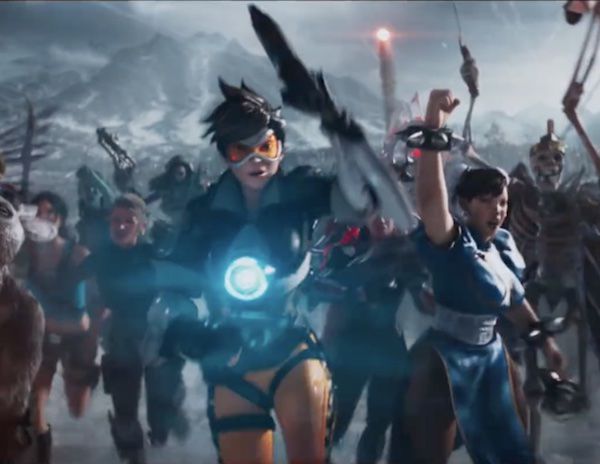 It will come as no surprise that the latest trailer for Ready Player One, based on the novel of the same name by Ernest Cline, is packed with dozens of pop culture references in the spare 90 seconds of footage.

Right off the bat, though, fans of of the novel will notice a decided lack of references to one particular ’80s pop culture staple, the one directing the movie. Steven Spielberg has said that, rather than risk Ready Player One becoming a self-referential smorgasbord, he intentionally left out references to his own work.

There is one notable exception: the DeLorean from Back to the Future. It shows up as Parzival’s ride throughout the trailer, notably at the beginning as they’re getting ready for the race (in a later shot you can also see the custom Knight Rider KITT LED on the grill, as per the novel). In the pre-race shot, you can also catch the Mach 5 from Speed Racer and the Batmobile from the original TV series (the red dome flasher gives it away). Ryu from Street Fighter is also among the drivers moving throughout the vehicles. Other “squint-or-you’ll-miss-it” vehicles include the Charger from Mad Max and the A-Team van. What stood out to me as I watched the scene is that the majority of these cars are generic vehicles, driven by the cannon-fodder Sixers who we see falling in droves throughout the trailer.

Post–vehicular combat, the trailer switches to the nightclub and gives us a few extra Easter eggs. Building off the previous references, we have Blanka from Street Fighter, his distinctive hairdo bristling behind Art3mis’s avatar. As well as someone walking around as Lara Croft from Tomb Raider. There are also additional nods to DC comic characters. Deathstroke gives Parzival a nod as he enters the club and a duo that look an awful lot like Harley Quinn and Joker show up later in the trailer.

Even better than the nightclub scene, however, is the battle scene. Here you really get a feel for the diversity of pop culture that’s present in Oasis. What’s refreshing is that Spielberg didn’t feel the need to stop with the ’80s and ’90s when peppering in references. The book takes place in 2045, after all, so it stands to reason that a fair amount of Oasis avatars would be patterned after popular modern games. Front and center in the scene is Tracer, the poster-character of Blizzard’s Overwatch. To her left is one more Street Fighter reference, Chun-Li. To her right is Lara Croft once again.

Additional shots of the battle show the Battletoads, a certain Ninja Turtle-looking profile, and Battleborn characters. I particularly like the old-school armored ostrich from Joust front and center. We also get a bait and switch shot of Parzival holding up the boombox from Say Anything, which would make you think he’s trying to woo Art3mis. Then, in the wider shot, you see him again, boombox overhead, with avatars rushing into battle around him.

Japanese pop culture gets some representation as well. There’s a great shot of Aech’s RX-78 Gundam, ready to perform its special move. What surprised me, though, was the inclusion of Kaneda’s bike from Akira. It’s a pivotal anime (and manga) that was surprisingly unrepresented in the original novel (here, it appears to be Art3mis’s ride). I’ve heard mention of the titular mech from Big O being in the trailer as well, but it must have been spotted by someone with much better eyes than I (it might be one of the mechs in the battle, but it’s too blurry to say for sure).

The Iron Giant and King Kong both make prominent appearances as well, the latter being a bit of a surprise. While the book did mention Godzilla (and his foes), there was no mention of the giant movie ape. I’ll be curious to see how he figures in or if he’s just there for flavor. Undoubtedly, even more references will be revealed as we get additional footage.

Closer to the Heart

On repeated viewings of the trailer, some of the more subtle story bits from the novel stood out. Spielberg has done a fantastic job of depicting just how pervasive the Oasis is in everyone’s lives. There’s a woman dancing around the kitchen of her tiny trailer in The Stack, oblivious to the world outside her window as Parzival walks by. There are scores of homeless on the street, Oasis portals strapped to their heads. In fact, it’s more unusual to see someone not jacked in to Oasis in the trailer.

There’s also a great scene of Parzival getting what I can only assume is the Extra Life coin from a robotic docent, possibly on Archaide, possibly at the replica of Holliday’s home town (since they’re standing in front of a “First Version of Oasis” exhibit). I enjoyed the less flash-bang scenes in the novel as much as the giant battle scenes, so it’s good to see them preserved here.

I will admit that I was a bit nervous when I heard that Ready Player One would be adapted for the big screen. Even with a master like Spielberg at the helm, Ernest Cline’s debut novel has some major soggy-middle syndrome and veers dangerously close to sidelining its only major female character by the end of the book. Fingers crossed that the movie adaptation will keep Art3mis as an active player throughout and give her a bit more agency in the finale.

For all its positive reception, Ready Player One is pretty damn testosterone-heavy. I saw a tweet recently that mused on how the novel would have been received if the nostalgic references were from “girl properties” of the ’80s and ’90s. It would have been fun to see Parzival or Art3mis riding into battle on the back of Rainbow Dash from My Little Pony, wielding She-Ra’s sword emblazoned with Rainbow Brite stickers, but ultimately it would have been shunned as “silly” or parody.

Of course, now that Ernest Cline has established this “Nostalgia-punk” genre, maybe it’s time to shake things up and add something other than boy-dominated toy lines and cartoons to the mix. Maybe with Spielberg’s influence there will be wider representation in the sequel.

For now, it appears that the original novel is in good hands. I’m eagerly awaiting next March.