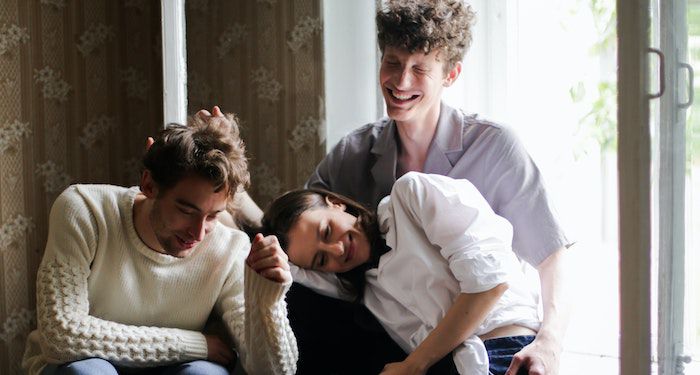 In the last ten years, YA books have become exponentially more inclusive when it comes to race, sexuality, and gender. This isn’t to say that there isn’t still room for improvement and growth, and more books that celebrate and explore intersectionality are always welcome — but if you are not white, cis, or straight, there are many more YA books for you in 2022 than there was in 2012. However, one dynamic that YA has yet to explore more deeply is polyamorous relationships in YA.

Polyamory is the practice of engaging in a romantic relationship with more than one partner, with the consent of all parties involved. While there are certainly YA books that depict a teen character engaging in multiple romantic relationships, the most common narrative is that the person with multiple partners hasn’t informed their other partners of this, which is not ethical. I think there are a few reasons for why there aren’t more depictions of polyamory in YA, but most likely it’s because polyamorous relationships haven’t quite been accepted into mainstream society and pop culture.

I found myself curious about portrayals of polyamory in YA books after seeing one such relationship teased in a novel I read recently, but the practicalities of what it actually looked like were completely skirted by the author. Just like with monogamous romantic relationships, there are both good and bad polyamorous relationships, but more often than not, negative depictions of polyamory receive more attention. Not only does this feel unfair, but I think we do teens a real disservice by not being open and honest about relationships of all kinds, and by explicitly or implicitly shaming certain types of relationships.

Polyamory takes many forms, so there is no one definition or road map, which is why more representation is important. This list from Autostraddle offers some good nonfiction reading about what polyamory is and how to ethically practice it. More YA books that explore these relationships are needed, as YA novels that depict polyamory in healthy ways are more likely to reach a wider audience of teen readers.

The first instance of polyamory in YA that I remember reading (and likely the first instance of polyamory in any of my reading, to be honest) was in Malinda Lo’s Adaptation duology. In Adaptation (2012), a sci-fi novel that takes place in the present day, Reese and her crush David are competing in a debate tournament far from home when flocks of birds begin hurling themselves into planes, causing all flights to be grounded. On the long drive home, they are in a car accident in the desert and wake up in a government facility before being sent on their way home. Once home, Reese struggles to adjust to her new reality, but she also meets Amber, a beautiful and mysterious girl who might have connections to the strange things happening throughout the world, and answers to what really happened to Reese and David.

Over the course of Adaptation and the sequel Inheritance (2013), Reese develops feelings for Amber and enters into a relationship with her even as David indicates he’d like to start a relationship with Reese. The love triangle is fraught, until it’s suggested toward the end of Inheritance that Reese date both Amber and David. The second book ends with an epilogue some months into the future and a summary that informs readers that Reese has proceeded with polyamory and that while it’s not without its struggles, it’s been a happy solution. However, Lo gave little indication and details about said struggles, and I was left feeling a bit disappointed that after seeing the love triangle play out up close, we didn’t get to see the solution in action. I don’t blame Lo for this decision — who knows what was going on behind the scenes of publishing, and what might have been deemed appropriate at the time.

Polyamory presented as a solution to a love triangle continues to be a theme in YA, as seen in Rachel Hartman’s fantasy work. In her Seraphina (2012) duology, titular character and court musician Seraphina falls in love with Lucian, who is unfortunately engaged to be married to the crown princess Glisselda. Lucian returns Seraphina’s feelings, but he cares deeply for Glisselda as well and knows that breaking off their engagement to be with Seraphina is impossible. Seraphina is saddened by this, but she also respects Glisselda and enjoys her friendship, so for much of the duology, her romantic feelings are fraught with doubt and guilt, and as the romance with Lucian takes a backseat to the political and magical plot that Seraphina is embroiled in. At the end of Shadow Scale (2015), Glisselda confesses her romantic feelings for Seraphina, who is surprised by this twist after coming clean about her feelings for Lucian. The three are left without a solution, but the implication that there is a possibility all three can be happy together.

As a reader, this was a surprising development, but one I enjoyed. However, the duology ends there, and Hartman’s next book is Tess of the Road (2018), about Seraphina’s little sister. In Tess of the Road, we see Seraphina a few years later, from Tess’s perspective. She lives very closely with Glisselda and Lucian, who are now married. We don’t get explicit confirmation that they are in a polyamorous relationship, but it is heavily implied by a few comments from the characters who knows them best, and Seraphina carries Lucian’s baby, who is then passed off as Glisselda’s. So it would seem that this is another example of polyamory presented as a solution, but what that looks like for the characters happens largely off the page.

In 2016, This Song is (Not) For You by Laura Nowlin was released, and although the official publisher’s summary leads readers to think that the novel contains a conventional love triangle, Nowlin explores not only polyamory, but asexuality in the book. It is about Ramona and Sam, who are best friends and in a band together, and they’re secretly pining after each other but both are afraid to make the first move and ruin their friendship. When Tom comes along, he’s the missing piece to their band, and Ramona starts to fall for him…but she’s also still in love with Sam. This is one of the first novels that actually delves into the messy feelings and sometimes awkward conversations that come with navigating polyamory, made more complex by Ramona’s struggle to comprehend Tom’s asexuality.

While there have been only a handful of books with polyamory in the last ten years or so, 2021 saw the publication of three new books containing polyamory representation. In Indestructible Object by Mary McCoy, Lee is an artist who has been dating her boyfriend Vincent for two years, and they even cohost a podcast together about being artists…until he breaks up with her on air before heading off to college. Left reeling, Lee must reconcile her new singlehood, her parents’ divorce, what she wants out of life and love, and relationships with friends old and new as she creates a new podcast.

This is a novel that doesn’t shy away from messy feelings, mistakes, and regrets, even when some of them play into stereotypes of polyamorous and bisexual individuals being cheaters. But it does address these stereotypes and how pervasive and harmful they can be, which is refreshing and thought-provoking. This isn’t a book where the characters have it all figured out, but love is messy and teens deserve to see characters who make mistakes and learn how to make amends.

Iron Widow by Xiran Jay Zhao, one of the biggest books of 2021 and an instant New York Times bestseller, also contains polyamory representation, subverting the love triangle trope. The protagonist, Zetian, lives in a sci-fi world where women are subjugated and forced to co-pilot machines to fight the enemy, but their work almost always results in their death while their male copilots live on. Zetian wants vengeance for her older sister’s death, and she soon finds herself torn between two very different young men…only, she doesn’t have to choose when all of them fall in love with one another. Iron Widow is arguably one of the highest profile YA books with a polyamorous relationship at the center that actually plays out, and it’s really exciting to be in the moment with the characters. There will be a sequel, but hopefully this will inspire more visibility.

Finally, the anthology Fools in Love edited by Rebecca Podos and Ashley Herring Blake contains romantic short stories that offer unique spins on romantic tropes. Naturally, the love triangle trope is ripe for a polyamorous story. “And” by Hannah Moskowitz is about an established couple, a girl and guy, and how they both feel confusion about their otherwise solid relationship when a male transfer student shows up during their senior year. I liked this dreamy short story that captures the confusion and excitement of the female character starting out by dating both boys and figuring out how to do so in a healthy and balanced way, but when something happens to one of her partners, all three feel a shift in their relationship. This is a short story, so it naturally doesn’t go into great detail, but I thought it was perfectly balanced and romantic.

It’s possible that there are some YA books with polyamory representation that I’ve missed — it’s very easy to do, considering that polyamorous relationships aren’t often advertised in a book’s copy or marketing info, and polyamory still isn’t talked about enough in YA. But the success of Iron Widow shows that polyamory in YA can and will sell, and I hope that we continue to see more iterations and stories that include all sorts of relationships, so that teens can read about and learn from all sorts of love and relationships.