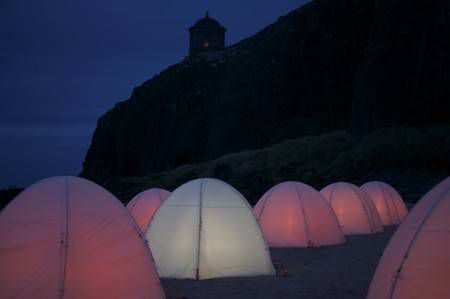 This past weekend, murmured poetry and glowing tents illuminated the British shoreline in an installation called Peace Camp. Have any Riot readers been able to go? If so, please tell us about your experience!

Actress Fiona Shaw and director Deborah Warner, a powerhouse theater duo, dreamed up this lyric landscape. Inspired by the United Nations Olympic Truce, they planned eight coastal camps of hundreds of tents, where visitors wander among the gold-lit domes while listening to recorded readings of famous love poetry.

As Shaw puts it, they gathered “poems that begin to behave like boxers. They have muscle.” The choices are often classic, such as John Donne’s “To His Mistress Going to Bed,” Elizabeth Barrett Browning’s “How Do I Love Thee?,” lashings of Yeats and Shakespeare. But there are some curveball choices too, such as Nick Cave’s “Into My Arms.” Shaw herself recorded several poems, joined by readers such as actor Simon Russell Beale and novelist Edna O’Brien.

The tents cluster in relatively remote locations across the country. Rather than perch near larger coastal towns like Brighton, the encampments have popped up by the creamy cliffs of Cuckmere Haven on the English Channel, by the ruins of the 14th-century Dunstanburgh Castle in Northumberland, and other picturesque spots.

In a Guardian interview, Shaw dodged the question of her personal favorite love poem but explained the thinking behind the tents: “War camps, disasters, people who are sick in hospital camps—but also the way we live in little groups. And to put them on headlands means we’re looking at the sea, which is our death, our life, our unconscious.”

Those of us far from those beaches can turn to the videos and audio clips on the website. Harriet Walter reading Keats with her matchless, syrupy-gravel voice… yes please! You can also suggest a favorite love poem, for a future online anthology of romantic verse to create a “portrait of love.”

Now I’m daydreaming of what an American version of this might be like. We’re not an island nation, so our tents would bubble up beyond the coasts, maybe among the sequoias in California or along the rim of the Grand Canyon or…

If you could hear a beloved poem read aloud in a breathtaking landscape, where would it be?