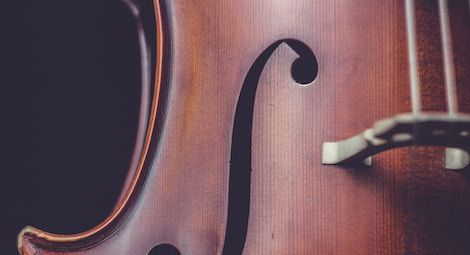 Music is often what people turn to when looking for hope, inspiration, or a way to capture their most passionate feelings. From 19th century authors to Instapoets, writers are no different: they have been fascinated by writing poems about the power of music throughout the decades. Poems about music stand as testaments to how it has served as a savior, a bringer of joy, and the bearer of memories. 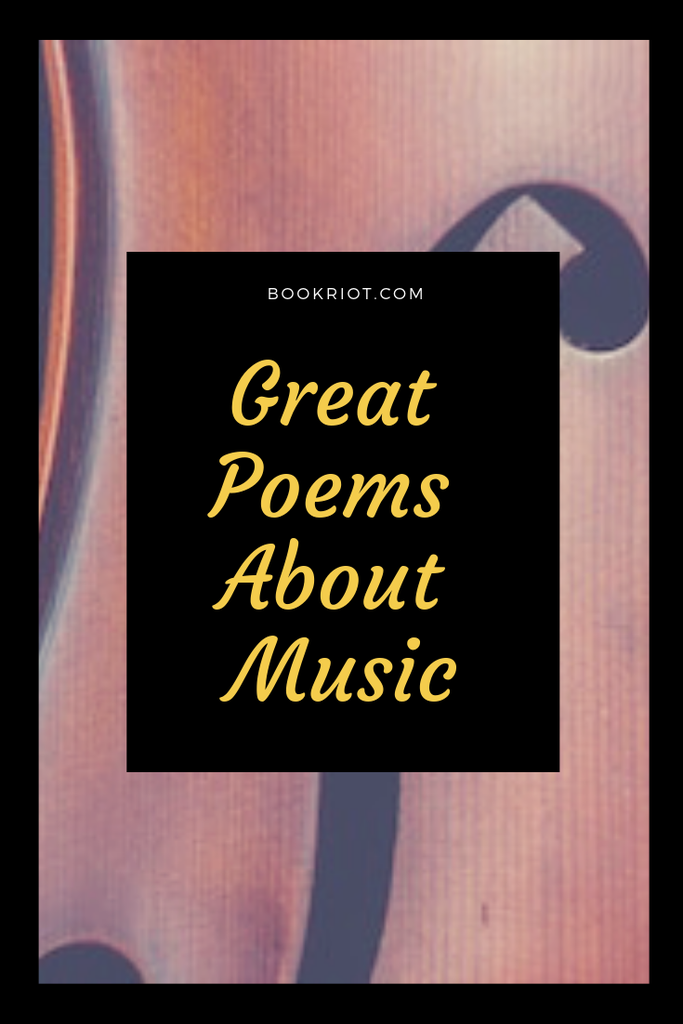 Here are fifteen music poems that describe the magic and complete power of music.

1. “She Sang My Soul Back Together” by Cleo Wade

View this post on Instagram
Check Your Shelf Newsletter
Sign up to receive Check Your Shelf, the Librarian's One-Stop Shop For News, Book Lists, And More.
Thank you for signing up! Keep an eye on your inbox.
By signing up you agree to our terms of use

I barely have a single memory from my childhood that doesn’t have the music of #ArethaFranklin playing in our house. Her Live At Fillmore West Album has been my companion through every heartbreak, rejection, and growing pain I have ever experienced. We rarely get a chance to thank our heroes in person but when we pass on their stories, their talents, and their gifts to the next generations, we are able to honor their spirit and contributions to the human experience. I plan on doing that. It is the least I can do after all her music has done for me. Rest in power Aretha Franklin, The Queen Of Soul.

thru universes
leaning-moving
we are traveling

where are we going
if we only knew

we are going
away-away-away
beyond these wooden tables
beyond these red lights
beyond these rugs & paper
walls beyond way past
i mean way past them clouds
over the buildings over the
rivers over towns over cities
like on rails but faster like
a train but smoother
away past stars
bursting with drums.

a sudden misunderstanding
a cloud
full of grayness
a body thru a store window
a hand reaching
into the back
pocket
a scream
a piano is talking to you
thru all this
why don’t you answer it.

3. “Things I Strongly Believe In” by Rudy Francisco

Her wattled fingers can’t
stroke the keys with much
grace or assurance anymore,
and the tempo is always
rubato, halting, but still
that sound—notes quivering
and clear in their singularity,
filing down the hallway—
aches with pure intention, the
melody somehow prettier
as a remnant than
whatever it used to be.

5. “Music when Soft Voices Die (TO –)” by Percy Bysshe Shelley

Music, when soft voices die,
Vibrates in the memory—
Odours, when sweet violets sicken,
Live within the sense they quicken.

Rose leaves, when the rose is dead,
Are heaped for the belovèd’s bed;
And so thy thoughts, when thou art gone,
Love itself shall slumber on.

6. “Tell Me How the World Ends” by Amanda Torroni

9. TELL ME HOW THE WORLD ENDS #TheLonelyAstronaut #NationalPoetryMonth

7. “A Poem in which I Try to Express My Glee at the Music My Friend Has Given Me” by Ross Gay

Because I must not
get up to throw down in a café in the Midwest,
I hold something like a clownfaced herd
of bareback and winged elephants
stomping in my chest,
I hold a thousand
kites in a field loosed from their tethers
at once, I feel
my skeleton losing track
somewhat of the science I’ve made of tamp,
feel it rising up shriek and groove,
rising up a river guzzling a monsoon,
not to mention the butterflies
of the loins, the hummingbirds
of the loins, the thousand
dromedaries of the loins, oh body
of sunburst, body
of larkspur and honeysuckle and honeysuccor
bloom, body of treetop holler,
oh lightspeed body
of gasp and systole, the mandible’s ramble,
the clavicle swoon, the spine’s
trillion teeth oh, drift
of hip oh, trill of ribs,
oh synaptic clamor and juggernaut
swell oh gutracket
blastoff and sugartongue
syntax oh throb and pulse and rivulet
swing and glottal thing
and kick-start heart and heel-toe heart
ooh ooh ooh a bullfight
where the bull might
take flight and win!

9. “The Everyday Enchantment of Music” by Mark Strand

10. “A Poem for Ella Fitzgerald” by Sonia Sanchez

when she came on the stage, this Ella
there were rumors of hurricanes and
over the rooftops of concert stages
the moon turned red in the sky,
it was Ella, Ella.
queen Ella had come
and words spilled out
leaving a trail of witnesses smiling
amen—amen—a woman—a woman.

she began
this three agèd woman
nightingales in her throat
and squads of horns came out
to greet her.

streams of violins and pianos
splashed their welcome
and our stained glass silences
our braided spaces
unraveled
opened up
said who’s that coming?
who’s that knocking at the door?
whose voice lingers on
that stage gone mad with
perdido. perdido. perdido.
i lost my heart in toledooooooo.

we first watched her navigating
an apollo stage amid high-stepping
yellow legs
we watched her watching us
shiny and pure woman
sugar and spice woman
her voice a nun’s whisper
her voice pouring out
guitar thickened blues,
her voice a faraway horn
questioning the wind,
and she became Ella,
first lady of tongues
Ella cruising our veins
voice walking on water
crossed in prayer,
she became holy
a thousand sermons
concealed in her bones
as she raised them in a
symphonic shudder
carrying our sighs into
her bloodstream.

this voice, chasing the
morning waves,
this Ella-tonian voice soft
like four layers of lace.
when i die Ella
tell the whole joint
please, please don’t talk
about me when i’m gone…

i remember waiting one nite for her appearance
audience impatient at the lateness
of musicians,
i remember it was april
and the flowers ran yellow
the sun downpoured yellow butterflies
and the day was yellow and silent
all of spring held us
in a single drop of blood.

Typewriter Series #2518 by Tyler Knott Gregson . Remember, again, there is help if you need it. Always. 1-800-273-8255. Reach out. I know I am a broken record, but at least my song is true. Be here. For us. . Text for Tired Eyes: . To be there to see it, the wings of geese in the lightlessness, the blur of hummingbirds roaring softly on summer porches, the earthquake of thunder on evenings where you swear dusk will never fade out.  Be for this,  keep being, for there is music in all this,  quietly it plays, almost inaudible, but the melody remains, be for this, and lend yourself to the  perfect cacophony. . . -Tyler Knott Gregson-

12. “The Guitar” by Federico Garcia Lorca

Whenever my father was left with nothing to do —
waiting for someone to ‘get ready’,
or facing the gap between graduate seminars
and dull after-suppers in his study
grading papers or writing a review —
he played the piano.

I think of him packing his lifespan
carefully, like a good leather briefcase,
each irritating chore wrapped in floating passages
for the left hand and right hand
by Chopin or difficult Schumann;
nothing inside it ever rattled loose.

Not rationalism, though you could cut your tongue
on the blade of his reasonable logic.
Only at the piano did he become
the bowed, reverent, wholly absorbed Romantic.
The theme of his heroic, unfinished piano sonata
could have been Brahms.

Boredom, or what he disapproved of as
‘sitting around with your mouth open’
oddly pursued him. He had small stamina.
Whenever he succumbed to bouts of winter bronchitis,
the house sank a little into its snowed-up garden,
missing its musical swim-bladder.

None of this suggests how natural he was.
For years I thought fathers played the piano
just as dogs barked and babies grew.
We children ran in and out of the house,
taking for granted that the ‘Trout’ or E flat Major Impromptu
would be rippling around us.

For him, I think, playing was solo flying, a bliss
of removal, of being alone.
Not happily always; never an escape,
for he was affectionate, and the household hum
he pretended to find trivial or ridiculous
daily sustained him.

When he talked about music, it was never
of the lachrimae rerum
that trembled from his drawn-out phrasing
as raindrops phrase themselves along a wire;
no, he defended movable doh or explained the amazing
physics of the octave.

We’d come in from school and find him
cross-legged on the jungle of the floor,
guts from one of his Steinways strewn about him.
He always got the pieces back in place.
I remember the yellow covers of Schirmer’s Editions
and the bound Peters Editions in the bookcase.

When he defected to the cello in later years
Grandmother, in excrucio, mildly exclaimed,
‘Wasn’t it lovely when Steve liked to play the piano.’
Now I’m the grandmother listening to Steve at the piano.
Lightly, in strains from Brahms-Haydn variations,
his audible image returns to my humming ears.

Looking for more poetry in your life? Check out our other poetry posts through the #poetry tag.