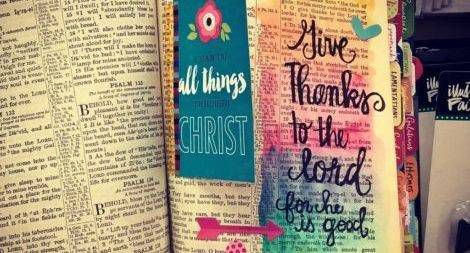 Back in the olden days when I was a graduate student in theology, I happened to be writing a sermon on the day a particular fella picked me up for our first date. He glanced at the open Bible on my desk and then became utterly still. In fact, he blanched. Have you seen someone with an olive complexion blanch? They turn a curious shade of green.

“You write… in the Holy Bible?”

I mean, I was a student. And I write in all my books.

Turned out, he was not just a Catholic, but a New Orleans Catholic, which, later, I learned meant that he was raised in an environment that Vatican II just sorta… skipped right on by.

So of course he was horrified.

Presumably, he got over it. Because he married me.

Fast forward several decades to last week: divinity school and sermons are a dim memory, and I’ve long since left the church. I was in an art supply store on a mission to find a gift for one of my graduating students, and I accidentally discovered the BIBLE JOURNALING phenomenon.

I was with our close family friend, my honorary daughter, who had graciously schlepped all over Hell’s Half Acre with me looking for this perfect item. We were in craft store number three. 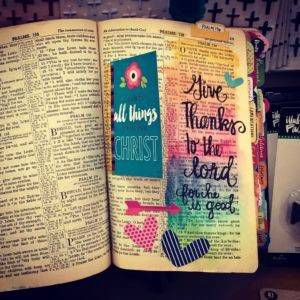 “Oh!” she said. She grabbed it off the shelf, an old King James Version that had been full-on pimped.

“I’m strangely fascinated by these,” she said. “Pinterest is ON FIRE with this shit.”

Becca works at a church, doing what I did twenty years ago, running a program called Godly Play, a liturgy-based, rather than classroom-based, education program for children, a Protestant variation on Maria Montessori’s Catechesis of the Good Shepherd.

And Becca is all about the DIY. She was, in fact, entranced, reverently flipping through the pages.

“At our last meeting my director asked me what spiritual practices were working for me,” she said, giggling. “And I said ‘None of them are working!’ So she told me it was maybe time to try something new.”

There weren’t just watercolor illustrations added to this KJV, but also nifty tabs with the book names on them.

“But why is the woman’s name a tiny tab, and all the others are huge?” And she pointed to Esther.

“This other one, the Book of Anus, is small, too. It’s not just Esther.” 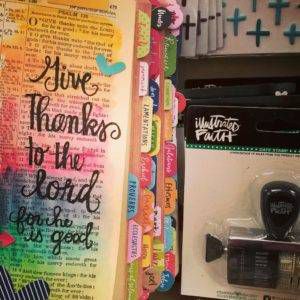 See the nifty tabs that are nifty?

“I studied Hebrew!” I laughed. (It’s a family joke. But I totally did.) “Come on. You can’t tell me that font doesn’t look like anus!”

She tried prying back the pages under a cutesy clip to read what the book actually was—honestly, you really couldn’t tell—but before we could solve the mystery, her phone rang.

We were running late, and she had a Mariners game to get to, so we had to cut our charming conversation short. We finally found the perfect gift, and away we went.

Later I did some research into bible journaling. Sure enough! She’s totally right about Pinterest being on fire. And! Now this, I did kinda get excited about: you can buy any one of a number of different translations of wide-margin note-taking bibles, NIV, KJV, and ones that must be new since my seminary days, because I didn’t recognize those particular collections of letters. (More of an NRSV girl, myself.)

Becca later told me that the company Illustrated Faith has figured out how to profit from the pimp-your-bible trend. “It’s kind of impressive and terrifying at the same time.” 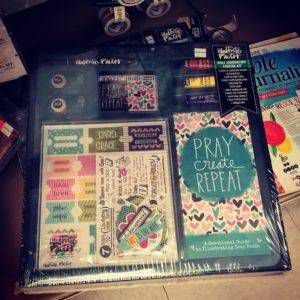 Which is how I feel about the whole thing, but not so much on the terror part. (Because consumerism!) I would probably find the practice distracting and fiddly. Not really my thing. But the phenomenon is fascinating, the need to make a mark, to participate in beauty.

Becca recently lost a parent, a close friend of mine. If this Bible Journaling practice is calming or healing or meditative, for her or for anyone, who am I to judge? I’m a big advocate of engaging deeply with texts—which is what we divinity school dropouts ironically, smilingly, call them. I don’t care whether it’s a foundational text of a religious tradition or a bestseller that has somehow captured our collective imagination, dig deep and ask the next question. Or just take delight. If pens and paints and tabs are valuable to you, do it.