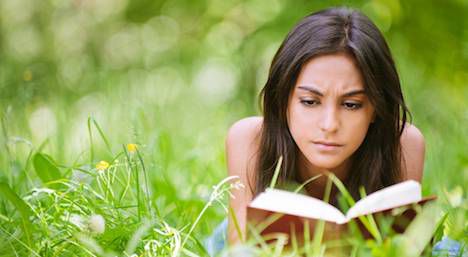 Katie Hardy is a former New Englander in her 30s who loves football, The Muppets, failing at bookish Pinterest crafts, writing when she should be performing chores around the house, using too many commas, black raspberry ice cream, and making lists. She’s a single mum to two girls who have hit the Teenage and Tweenage Years (send wine), and likes to think of all the associated chaos as a dry-run for her stand-up routine, which is performed weekly at her therapist’s office. She currently lives in North Texas, where she’s working to help turn the state blue before she’s legally allowed to return to her home state of Massachusetts. Follow her on Twitter @Katie_in_MA.

I’m a child of the ’80s. Like many of us, I was often banned from being indoors during the summer, from just after breakfast until my mom yelled out the back window for us to come inside and wash up.

I was not an outdoorsy person.

I grew up as a bookworm and self-identified as such from a very early age. That’s what happens when my parents spent what little discretionary funds they had on books for me as a toddler, and often shuttled me and my siblings to the library to supplement my supply. I learned to read at age 3, and I haven’t stopped since. I would read in bed all night until my mom stopped agreeing to “one more chapter!” When I grew into chapter books, I would happily read all day, too, because I got so caught up in the stories, just like I was there, and I needed to find out what happened next! As soon as breakfast was over, I would find a quiet nook in the house (not an easy feat with a family as big and boisterous as mine) and settle in for pages and pages. Curling up with a book was my favoritest way to spend the day.

Except—I was a child of the ’80s who was kicked outside after breakfast during summer break.

You’d think the obvious solution would have been to just bring my books outside. Sometimes my mom would let me, and I’d pull up a lawnchair (remember those woven plastic lounge chairs you could fold into teepees?) and read away, blissfully content. Other times, my mom would stop me as I walked by with a book or two in my arms and confiscate my plans for the day. I think she wanted me to maybe get some exercise, forcing me to run around or take my bike for a spin. But that’s not what I would usually do. And what was that? The answer, as it usually is, was books. I would pretend I was inside them and act them out. 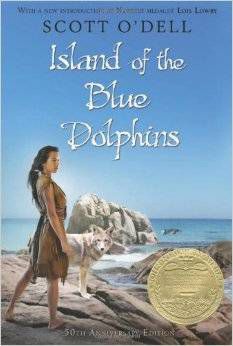 Off to the woods I’d go, playing Island of the Blue Dolphins, as I lined bamboo (a really tall weed that grew in our yard that wasn’t bamboo, but that’s what we called it) and wooden slats we’d found into a line in front of a boulder. Often my sister would join me in my adventures. Sometimes we’d take our dog on a leash so we could make her be a wolf or our pet or whatever character we needed. Sometimes we pretended my toddler-aged brother was our nemesis, although we didn’t clue him in. We just bounced our play-acting against wherever he was in the yard, never telling him he was even part of our pretend-world so he couldn’t sabotage our fun.

If it wasn’t Island of the Blue Dolphins, it would be The Boxcar Children, or Julie of the Wolves, or Little House on the Prairie. We preferred disaster stories. Stories where times were tough and kids were on their own. Anything that meant we had to use our pile of sticks and stones and purloined pocket knife to survive in the Outside World we had been banished to. My mom had put us in that situation where it was us and a pile of sticks against the world, and so—we turned to survival stories.

Of course, this might be a lie. It could be that because I was banished outside, I turned towards survival stories as a means of coping with my tragic situation. It’s the great literary equivalent of the chicken and egg dilemma.

However it came to be, it got me through many summer days without losing my mind. Dragging the plotlines from my survival stories taught me, hey! I can do this! If I can be stuck outside for an entire day and deprived of what I want to do, I can make the most of it. I can get through it. I have pretended away many other real-life situations, helping me stick it out until I can fix the problem in real life. Sometimes just pretending to be the heroine of my novels is all I needed. What would Julie do? Or Laura? Would I rather be Karana facing down a pack of wolves, or me facing down the deadline of my paper? Suddenly my time crunch wouldn’t seem so bad.

I could handle anything! And once I did, I rewarded myself…with a pile of books and quiet corner so I could cuddle up to some pillows and read.