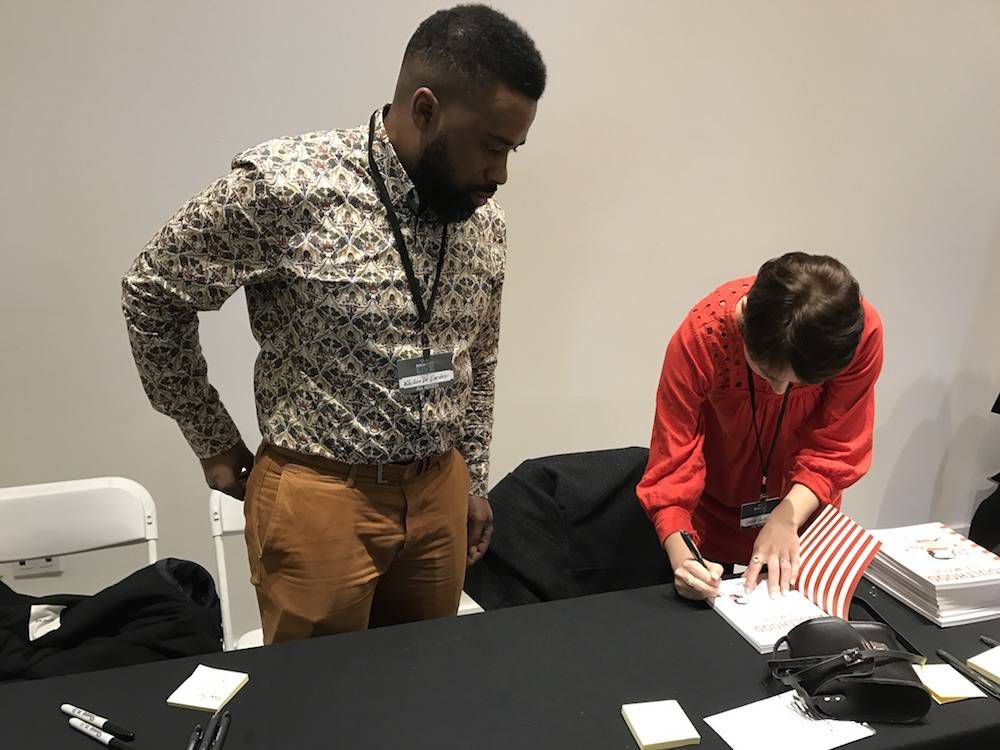 Book Riot Live 2016 had me busy behind the scenes, and like many of the Rioters making it all happen, I didn’t get to see as much of the programming as I would have liked. But one of the few panels I experienced in its entirety was Sunday’s Pictionary match between Sarah Andersen and Valentine De Landro.

I was heavily invested, having written out 71 Pictionary cards featuring book titles submitted by Rioters. As I hand-lettered the index cards (super self-consciously because ARTISTS were going to see my handwriting), I had imagined how I’d try to get the audience to guess these titles. It wasn’t easy to come up with strategies quickly, so I couldn’t imagine how Sarah and Valentine were going to get ideas and draw them in front of a crowd—while in friendly competition with one another.

But they are total pros, even at parlor games. They were on fire, and so was the audience. Sarah had only to draw a heart and an attendee immediately guessed Love in the Time of Cholera. Valentine did an excellent Atlas shrugging doodle. They were burning through the cards, and by the end of the first round, my back-of-the-napkin calculations led me to scrawling out more titles off a hastily Googled list of famous books. No time to imagine approaches now. If someone hadn’t read Watership Down, I had no clue what they might attempt (upon more leisurely reflection…water, and a ship, and a down arrow?). As it happened, Sarah drew a bunny and the audience got it.

It was legit thrilling. They were pretty evenly matched; Valentine’s drawings are impossible to confuse for anything other than what he intended (amateur Pictionary players know what an edge this is), and Sarah’s self-described scribbling style lends itself to speed. Valentine had the lead, then Sarah took it and hung on for the win. The final score was 44 to 40. They got us to guess 84 titles, and passed on maybe a dozen cards. What brave good sports they are.

But the very best moment came after the match, at the signing table: Valentine asked Sarah to sign his copy of Adulthood Is a Myth. Heart-eyes emoji, y’all.