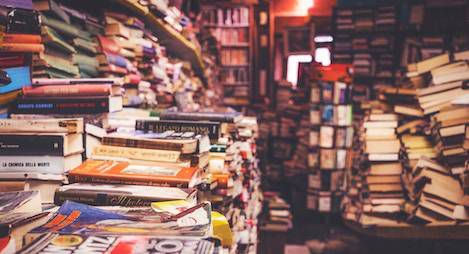 This is a guest post from Anthony Karcz. Anthony has spent the entirety of his adult life being a professional geek, obsessing over superheroes, transforming robots, galaxies far, far away, and always keeping a careful side-eye on his many (many) gadgets, lest they gain sentience. When he’s not busy raising his two amazing geeklets (having his daughter properly identify Dr. Strange at age 3 was one of his proudest moments), or providing sub-par craft work for his wife’s classroom, he can be found writing about games and hobbies for GeekDad.com and the latest technology and gadgets for Forbes.com. He currently resides in FL, where the perpetual 99% humidity practically necessitates a digital fiction collection. Follow him on Twitter @sunstreaker84.

Vacations are all about getting out of your routine and exploring new things. So when we went to the “City of Brotherly Love,” Philadelphia, PA, earlier this month, I did something that I haven’t done in nearly a decade.

I bought a book.

Now that’s not to say that I don’t buy fiction. I buy gobs of fiction. I can’t turn down a $.99 e-book, no matter how improbable it is that it’ll make it to the top of my queue, and if there’s a sale on comics, I’m doing the digital version of running up and down the aisles, shoving armloads of product into my cart. If my Kindle and Comixology libraries were converted from the digital, I would be on an episode of Hoarders. One where they found the body crushed under a stack of unread graphic novels.

No, what I did in Philly was buy an actual, physical book. And not just any book, but an oversized, “Gee, I wonder if this is going to push my luggage over the 50 lb. limit” photography book.

The Philadelphia Museum of Art currently has a travelling installation called “Wild: Michael Nichols.” Nichols is a nature photographer who you’ve likely seen in the pages of National Geographic and copious places online (That swooping Barn Owl image? The one where it looks like it’s about to take you out? That’s him). My family and I are fans of anything that has to deal with animals, so we ponied up our cash, grabbed a couple of audio guides, and headed into the exhibit.

We lost hours to exploring the three rooms of photographs (with complimentary classical art). Even my nine-year-old daughter, who I expected to be the first one out of the exhibit, was reluctant to leave as we went from picture to picture, taking in the shockingly stark and intimately engaging photographs. We listened to the stories, both harrowing and humorous, recounted by Nichols himself during the audio tour. When there wasn’t a story to go with the photograph, like with the pictures of orphaned elephants Nichols took in Africa, we found ourselves lingering and whispering to each other, wanting to provide context.

It was one of those experiences that reminds you why we need art in our lives. It took us outside of ourselves and transported us to a place we had never considered.  And none of us wanted it to really end. 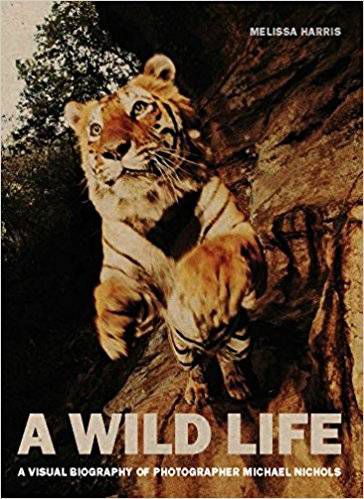 So when stacks of A Wild Life: A Visual Biography of Photographer Michael Nichols met us as we exited through the gift shop, the first thing I did was grab the sample copy on top and start paging through, my daughter watching me with pleading eyes.

It’s a beautiful book, with stories that are relatable, yet so far beyond most people’s normal experiences, it’s practically fantasy. Nichols’ photos are peppered throughout, some crystal clear, others just haunting glimpses, others that are so motion blurred they seem to be capturing a demonic conjuring rather than an animal.

Just a quick skim triggered the parenty part of my brain that pegged this as above my daughter’s ken (not her reading level, but her experience). But then, what kind of example would I be setting if I showed her a glimpse of something bigger, and followed up with “but you can’t learn more.”

So without doing my usual “Amazon app dance,” without so much as a thought about carting this giant tome through the airport, I placed A Wild Life in my daughter’s hands and brought it to the cash register.

As she read it on the plane the next day, iPad games forgotten, I was reminded that there’s a place for real books in this world and I need to make more space for them in mine.