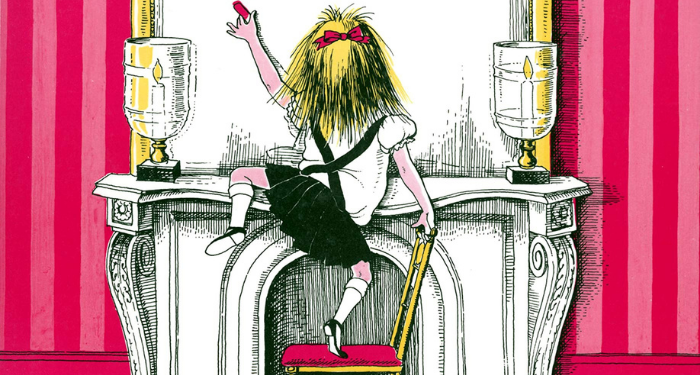 The original Eloise book bears the subtitle A Book for Precocious Grown-ups. The character Eloise came from Kay Thompson’s impression of a 6-year-old girl getting into trouble. Combined with Hilary Knight’s illustrations, Eloise has been an enduring presence in children’s literature for decades. On its initial publication in 1955, the book was an immediate sensation, and since then, Eloise has sold more than 2 million copies.

The perseverance of Eloise, 6-year-old troublemaker extraordinaire, lies in her consistent ability to overturn expected behavior and find fun anywhere. She rarely plays by the rules and prefers to take a chaotic approach to her daily tasks. The immediate popularity of Eloise caused the Plaza to set up a room where you could pick up a phone and hear, “Hello, it’s me, Eloise” (voiced by Kay Thompson).

Kay Thompson was an actress who resided in the Persian Room at the Plaza in the early 1950s. One of her best-known roles (outside of Eloise writer) was probably as Maggie Prescott in Funny Face in 1957. Although she never had children, she suffused her irreverent personality into Eloise, brought to life on the page by the illustrations of Hilary Knight. After the success of the first Eloise book, three quickly followed: Eloise in Paris, Eloise at Christmastime, and Eloise in Moscow. A fifth previously unpublished manuscript, Eloise Takes a Bawth, was published posthumously in 2002. Kay Thompson had initially stopped the publication of this book because she was burnt out on Eloise-mania.

Life According to Eloise

In Marie Brenner’s “The Story of Eloise” (included in Eloise: The Ultimate Edition), she notes that “it felt as if Eloise were America’s first naughty little girl.” Eloise predicted a future of rebellious youth breaking free from the social conservatism of the 1950s.

Although we can’t say where Eloise would have ended up, I believe she would have made her way downtown to beatnik clubs, gone to a few underground folk concerts, and certainly participated in anti-war protests in the late 1960s. Eloise also would have started a punk band in the 1970s, probably after a trip to London with her mother and Nanny. Eloise was never content to stay still, so in my Eloise fan fiction, she is running all over the world.

Eloise’s freedom was mostly due to her glamorous, globe-trotting mother. She put Eloise up at the Plaza with Nanny, who let Eloise explore the world of the Plaza (as long as she was home for dinner and attended her lessons). This freedom, especially for a little girl, allowed Eloise to develop her imagination without restriction.

Another important facet of the Eloise brand is how she apes adult behavior with a child’s perspective. Since Eloise lives at the Plaza and has the freedom to go where she pleases within the hotel, she learns her behavior from the high-class adults around her. But she’s still a child looking to have fun. She’ll have lunch at the Palm Court and talk to the waiters about their days, but then run down the hotel hallways with sticks to knock on everyone’s doors. Following Eloise through the Plaza means following where her imagination takes her, from weddings to maid carts to the Plaza lobby.

After rereading the Eloise books as an adult, I have pulled a number of philosophical tenets from the adventures of Eloise in her books for precocious adults.

If a day is ever dragging on, falling face-first into imagination is the best way to make it better.

2. If there is a party nearby, you’re going.

No invitation? No problem. Eloise attends every wedding she can, as well as the debutante balls and the galas and the fundraisers that take place in the beautiful rooms of the Plaza. If you hear an event going on and want to go, you should go. The more the merrier, as I’m sure Eloise would say as a hostess.

This is just good sense. The pandemic-induced roller-skating boom agrees with Eloise on this life philosophy.

4. Talk to absolutely everyone at the hotel.

If you are at a hotel, and you are Eloise, you know every single person at the Plaza because you take the time to talk to them. Eloise could not have nearly as much fun at the Plaza if she didn’t have daily check-ins with Johanna the maid and Mr. Salomone, the hotel’s manager.

5. A little chaos creates a lot of fun.

Whether she’s skating through the hallways of the Plaza at top speed, or jumping into a Parisian fountain, or dancing with jingle bells on Christmas, Eloise embraces chaos for the sake of joy.

A Final Word on Eloise

Eloise is the perfect avatar of New York City (just like Madeline is with Paris). She welcomes chaos and explores as far as she can, without putting any restrictions on what she can or can’t do. Whether she’s at the Plaza, the Relais Bisson in Paris, or the National in Moscow, she retains that spirit of exploration and chaos, which always leads her down interesting paths.

If you’re looking for more books about fearless children, you can start with these adventure books, or these biographies of fearless women (who might relate to Eloise).