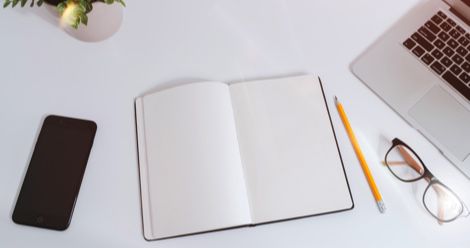 When I’m not at work (or reading more books than I can count) I spend most of my free time working on my novel. If you’re a writer, whether it be fiction or nonfiction, you know that you have your basic five steps of the writing process: prewriting, writing, revision, editing, and publishing—but it’s not that simple.  As writers, we all know how amazing it feels when an idea pops into your head. You just have to get it out and the words just flow out of your brain, but then a little thing called “writer’s block” happens. Which is where I am right now, and it’s been that way for the past two weeks. I’ve been able to write other things, but I haven’t been able to focus on my novel. Besides, Charles Bukowski said it best, “Writing about a writer’s block is better than not writing at all.” Here are the five phases of writer’s block:

Phase One: Sitting at your writing desk staring into space

You would think that after ten years of writing, I would stop doing this, because this does absolutely nothing for the creative process. You sit in front of your laptop ready to write something. But instead, you just stare at a blank page.

When I was in grad school, my classmates and I would often discuss ways to help with writer’s block: walking around outside, going shopping, anything to get the creative juices flowing. But do all of us do stuff like that? No. Usually after I stare at my laptop for what seems like an eternity, I click on YouTube, watch more beauty tutorials and reviews than I should, or binge watch Parks and Rec until it’s time to go to bed.

Phase Three: Who wrote this trash?

Just like any other artists, most writers are destined to hate their own work at one point or another. We reread what we initially thought was a masterpiece, but despise every bit of it. There have been times where I doubted myself so much that I deleted at least 30,000 words. If you ever find yourself in this position, give your work to beta readers. This gives outside opinions to your work. Sometimes, I go as far as to ask the reader what they would keep and what they would change in the story. Because you have to remember, the vast majority of readers aren’t writers, so they’re not going to see your story the same way you do.

Usually the frustration also has a little bit of “I’m not good enough” along for the ride too. You begin to question if this is what you really should be doing with your life. If publishing companies or literary agents would even give you a chance. Deep down, you know that writer’s block is a part of the process. But that doesn’t stop you from having crippling self-doubt.

Phase Five: Buckle Down and Write

This phase is easier said than done, but it must be done. And this is the mindset I’m trying to get myself in now. Your ideas will begin to flow again, your imagination will run wild; it just all takes time. There’s a story that needs to be told, writer’s block can’t get in the way of that.

Whether you’ve been working on your story for a week, a month or a year, writer’s block is going to rear its ugly head. But don’t let that deter you. I believe in you and your stories (even if I haven’t read them). Happy writing, Rioters!