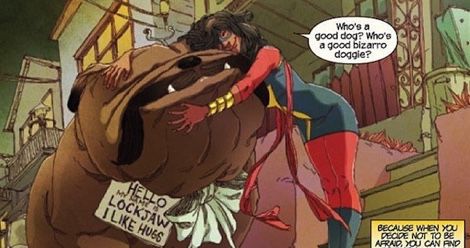 With the excitement heating up for this month’s release of Captain Marvel, the eyes of the world have turned to the movie’s true star: Carol’s cat, Goose. The orange tabby (actually played by four cats) already has a poster and a deluxe action figure and has starred in a livestream.

While we won’t know until March 8 whether Goose will use his awesome powers to save or destroy the universe, we can do a quick rundown of some awesome super pets past. Here’s some of my favorites: 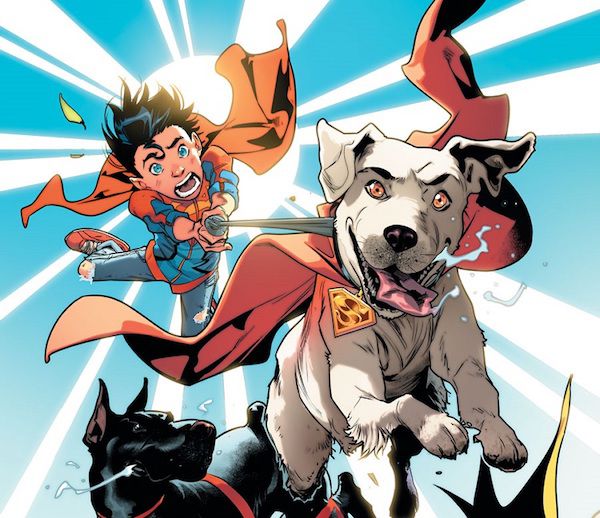 The most famous reindeer super-dog of all! At least, he’s the only one on this list to have gotten his own TV show, complete with a remarkably earworm-y theme song. Like Superman, Krypto hails from the planet Krypton, and was sent to Earth in a rocket by Superman’s dad Jor-El—in Krypto’s case, as a test for whether baby Kal-El would make it down safely. Thanks to Earth’s yellow sun, Krypto has all the powers of Superman plus the powers of being a very good boy, yes he is! 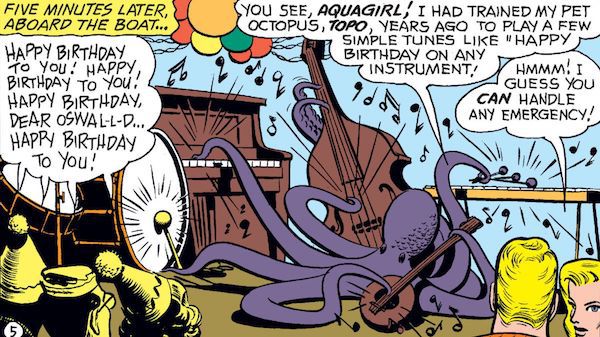 Did you know that Aquaman has a pet octopus named Topo who can play the double bass and the banjo? Is your life better now that you do know? You’re welcome. 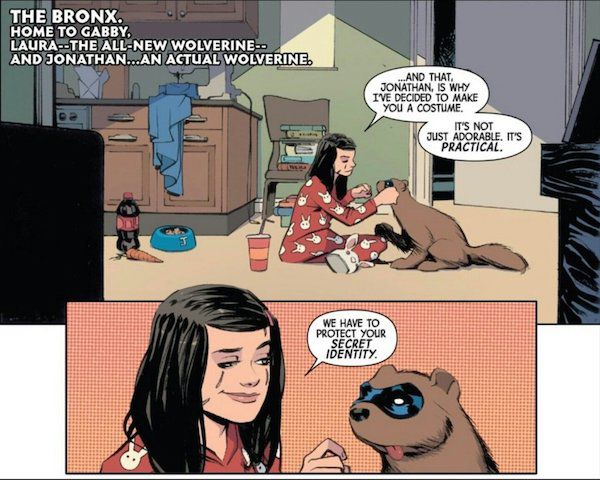 Laura Kinney is a clone of Wolverine, and after his death, she became the (all-)new Wolverine. Gabby Kinney is a clone of Laura Kinney. Jonathan Kinney is a regular wolverine who lives with them. He was rescued from an animal testing lab by Squirrel Girl, who promptly brought him to Laura on the assumption that she could talk to wolverines (she can’t), and Gabby insisted they keep him. He makes a surprisingly well-behaved house pet. 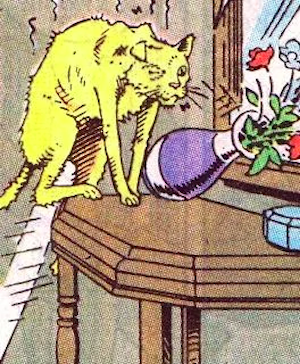 In the Silver Age, teenage sweetheart Supergirl had Streaky the Super-Cat, a well-behaved and heroic feline. In the ’80s, Supergirl’s alternate universe doppelgänger Power Girl (who was no longer her doppelgänger at the time, but would be again…don’t think about it too hard) had…Stinky. Stinky was neither well-behaved nor heroic. Stinky was…stinky. He terrorized the Justice League International and occasionally fought tiny aliens unbeknownst to his humans. Power Girl would go on to be shown owning cats named either Streaky or Stinky in various continuities, but no subsequent feline ever quite lived up to the hilariously terrible promise of her very first, very awful cat. 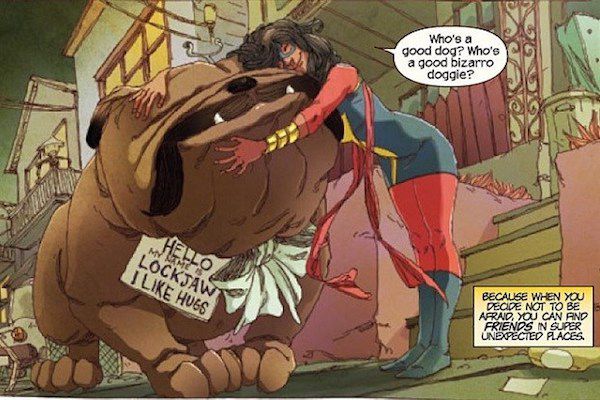 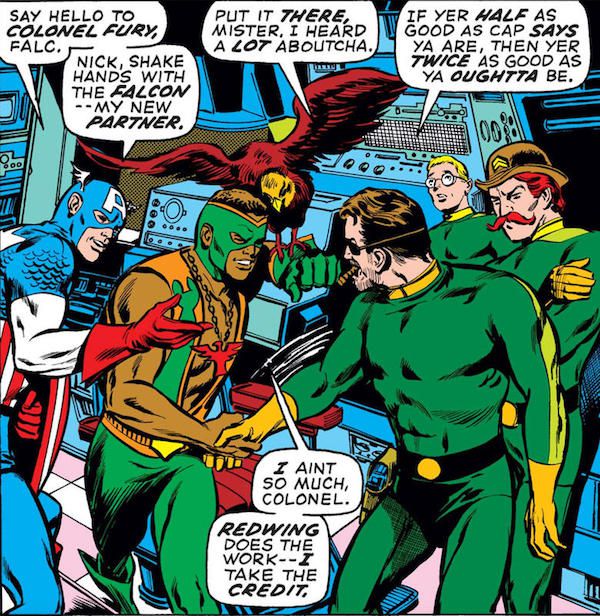 In the MCU, Redwing is a drone that Falcon treats like a pet, but in the comics, Sam Wilson can actually talk to birds—just like a Disney princess! This version of Redwing is a real live falcon that Sam befriended and trained and eventually gained a telepathic link with, allowing him to see through Redwing’s eyes. Redwing is smart and loyal and also maybe part vampire??? Don’t ask me how that works. 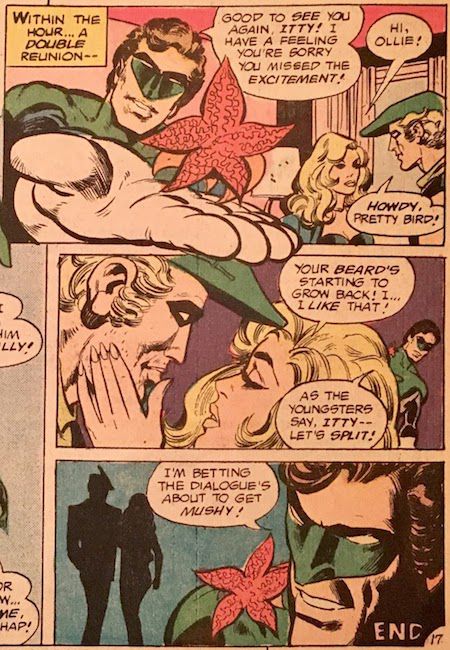 Itty was a weird little alien starfish (but not that alien starfish) that Hal Jordan found in space and kept on his shoulder for a while. Eventually Itty evolved and it turned out that he was actually a people, which happens sometimes with Green Lantern stuff and arguably disqualifies him from this list, but I’m just delighted that Hal spent much of the ’70s talking to the space flower who lived on his shoulder. (Well, a lot of people probably spent the ’70s that way, but Hal’s too square for hallucinogens.)

In case you can’t read the tiny text in the second panel, Foggy’s saying “Exactly, Matt, which is why he’ll only pretend to be one! He’s really a retired police dog! He can help you fight crime when you’re Daredevil!” Oh, Foggy.

In the ’90s, Foggy Nelson decided to adopt a retired police dog for his best friend, Matt “Daredevil” Murdock, on the somewhat inexplicable theory that Matt and Daredevil having the same dog would somehow preserve his secret identity (also known as the Ace the Bat-Hound Method). Since Matt didn’t actually want a dog, Deuce spent all his time with Foggy—once even saving his life from a gunman—until Foggy got very drunk and lost Deuce in a poker game to Deadpool’s sidekick Weasel. It is a very silly plot line but it’s one of the few Daredevil stories that doesn’t involve a fridged girlfriend, a nervous breakdown, or both, so I’m awfully fond of it. 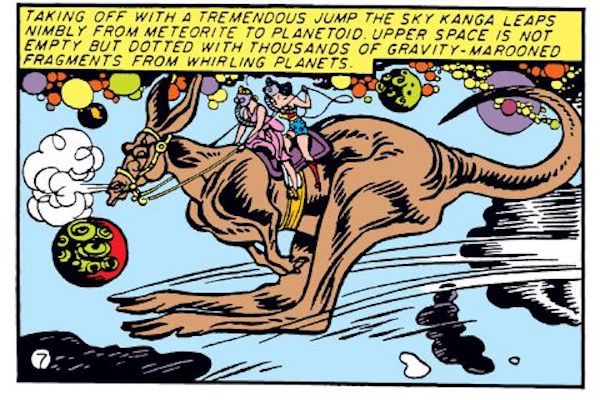 In the Golden Age, DC’s Amazons rode giant kangaroos called Kangas instead of horses. Jumpa is Wonder Woman’s. Sometimes Wonder Woman rode her to the moon. SHE IS A GIANT SPACE KANGAROO YOU CAN RIDE TO THE MOON. COMICS ARE A MIRACLE AND WE DO NOT DESERVE THEM.

Clint Barton is lucky (ha!) that he’s a sucker. After he shared his pizza with a neglected dog owned by the villainous Tracksuit Mafia, the dog in turn saved him from said Mafia and was nearly killed in the process. Clint got him patched up, adopted him, and named him Lucky, but the fans still call him Pizza Dog. Nowadays Clint and his fellow Hawkeye Kate Bishop share joint custody of Lucky, who has gotten his own viewpoint issue of Hawkeye, teamed up with Squirrel Girl’s roommate’s cat, and appeared as a playable character in the late lamented mobile game Avengers Academy. I know we started the list this way, but: What a good boy! Yes he is!

That’s my list, but who are your favorite super pets? (I already know I’m gonna get in trouble for not including Old Lace and Lying Cat. They are also very good and deserve treats!) Share your faves in the comments!