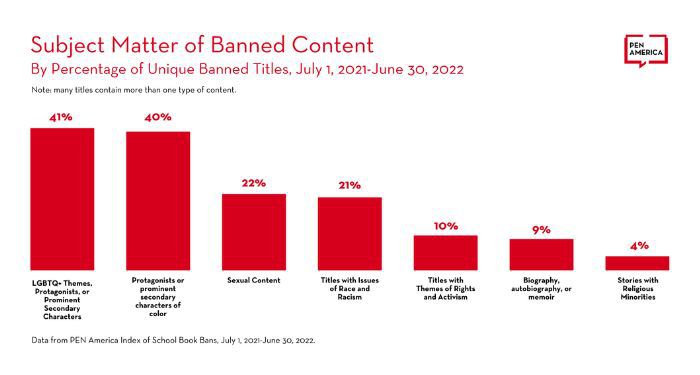 “More” is the key word in a newly released report from PEN America, the free expression group which has been tracking and detailing censorship and gag order bills across the country. The report, which updates their “Banned In the USA” from April, includes new data and information about the rise of book bans in the last year.

Where Are Book Bans Happening?

PEN estimates approximately 4 million students are impacted by these book bans, which have been reported in over 5,000 different schools.

What Books Are Being Banned?

Forty-one percent of the books banned directly address LGBTQ+ topics. Books by or about trans people account for 9% of that number.

Note that there is not a category for books featuring violence. Book banners are far more interested in erasing identities and experiences of queer people and people of color than talking about violence akin to that which they play a role in inciting. Groups like Moms For Liberty and more local groups such as Awake Illinois have encouraged violence and threats over books and library programming that does not fit their political perspective (including a recent cancelation of a privately-funded drag queen bingo program at Downers Grove Public Library in Illinois because of credible violent threats and an earlier threat to “gun down” a school librarian because of materials in the library).

Further, the majority of books being banned are published for young adults, while picture books and chapter books were also among the most commonly banned.

PEN also found that 96% of the book bans enacted did not follow the best practices guidelines for book challenges as outlined by the American Library Association or the National Coalition Against Censorship.

In what’s likely an underestimate–thanks in part to the challenge of documenting and tracking down accurate counts–PEN reports that there are at least 50 groups working to get books banned in schools and public libraries in the US. Within those 50 groups are eight which operate regional or local chapters, numbering somewhere over 300 (think Moms For Liberty and their county-by-county groups).

The vast majority of these groups have formed since 2021–73%–and PEN reports that 20% of the book bans in the last year being directly related to the efforts of these groups. An additional 30% of book bans are likely influenced by them as well, given the language and use of tactics that mirror those groups.

All of this comes despite the deep unpopularity of book bans among Americans of all political persuasions and the response parents have had to the options to restrict library material from their students in states like Florida, which some of the most draconian new “parental rights” policies.

PEN’s report is available to read in full on their website, and it is well worth the time to better understand the wide scope of book bans, who is behind them, and the tactics these groups are using to find, challenge, and ban titles which do not fit their agenda.