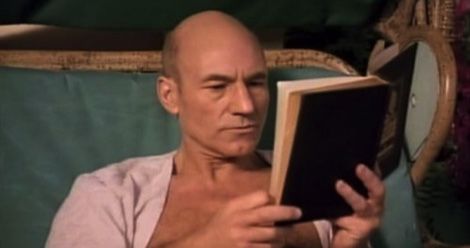 In case you missed the news, Captain Jean-Luc Picard is making a comeback.

It is an unexpected but delightful surprise to find myself excited and invigorated to be returning to Jean-Luc Picard and to explore new dimensions within him. Read my full statement in the photo. #StarTrek @cbsallaccess Photo: @shervinfoto pic.twitter.com/8Ynuj3RBNm

In light of this super-exciting, life-affirming news, here is a look at 5 times when Patrick Stewart and his space-exploring alter ego brought books to the bridge of the Enterprise. That he did so should come as no surprise, as Stewart is known as a particularly bookish actor, having brought the works of Shakespeare, Dickens, Melville, and so many others to life on both stage and screen. 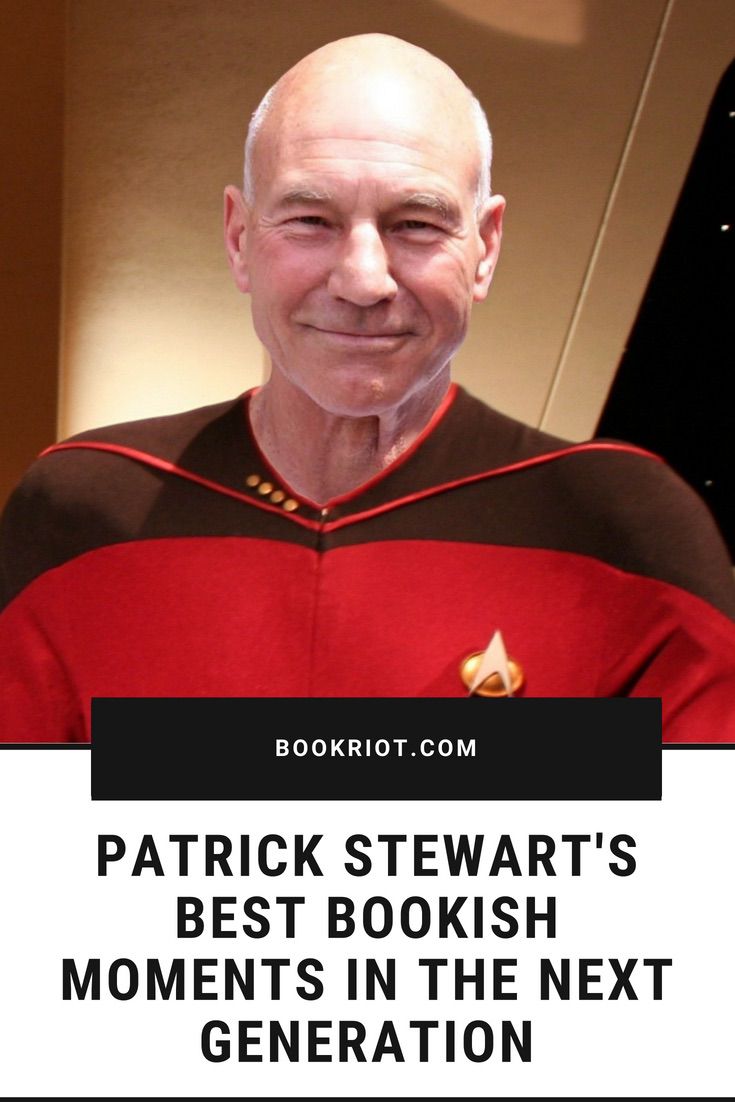 Okay. So the Dixon Hill novels that Picard loves so much aren’t real. His enjoyment of them, though, is very real. That’s good enough. In this episode, he escapes to the holodeck and into the world of detective Dixon Hill in an effort to evade the advances of a very persistent Lwaxana Troi (a recurring theme throughout the series). This is just one of several times that Picard visits the holodeck for some detective work. If you wish you could get a taste of Dixon Hill’s world, you might try Raymond Chandler’s The Big Sleep.

This is one of a handful of episodes that really gives the audience a glimpse into the special relationship that Picard has with Data. It opens with Picard coaching Data through a performance of Henry V.  They return to this idea, Data exploring the human condition through acting, later in the series (“Devil’s Due” in season 4, for instance).  This instance, though, is particularly significant for two reasons.

First, the script originally made use of a Sherlock Holmes story for this scene, but they encountered some legal difficulties. Stewart suggested Henry V as an alternative, since key elements from the play have parallels later in the episode. That’s putting his Shakespearean background to good use (for other behind-the-scenes tidbits like this, check out Captain’s Logs: The Unauthorized Complete Trek Voyages) Second, Data is playing off of two holodeck characters while Picard looks on, evaluating his performance. One of the two characters, Williams, is Stewart in some pretty impressive stage make-up!

Lwaxana Troi, mother of our favorite ship’s counselor, is aboard the Enterprise, has attracted the attention of a particularly persistent Ferengi, DaiMon Tog. When she spurns his advances, he kidnaps her, Deanna, and Riker. Lwaxanna negotiates their release, agreeing to stay behind.  Picard hails the Ferengi ship in an effort to negotiate her release. Following her lead, he challenges Tog for her affections, turning to the words of William Shakespeare:

This episode is the conclusion of the season 5 finale, in which Data’s 500-year-old head is found in a cave on Earth. This can only mean one thing: a time travel episode! Data finds himself transported back to 19th century San Francisco. There, he meets a much younger Guinan, Mark Twain, and  Jack London (bonus bookish content!). Picard, Riker, LaForge, Troi, and Dr. Crusher all travel to the past to find him. As part of their cover, they pose as an acting troupe rehearsing for a production of another Shakespearean work, A Midsummer Night’s Dream.

More time travel! Picard and the crew travel back to just a few days before First Contact in an effort to fight off a Borg invasion. What might be the best bookish moment in all the TNG franchise occurs when Picard is compared to Captain Ahab by Alfre Woodard’s character, Lily Sloane, after watching him kill a member of the crew that had been assimilated by the Borg.

“You do have books in the 24th century?” Oh, yes. Yes, they do. The Star Trek franchise has reminded us of that fact again and again.

This is by no means an exhaustive list of bookish moments from TNG, but these are some personal favorites. Which ones are your favorites?