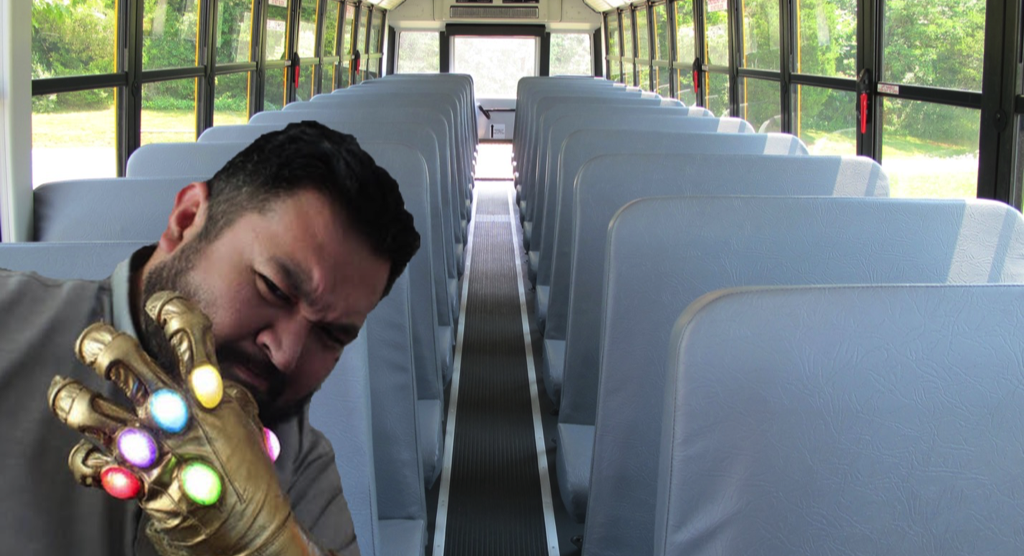 The bus hasn’t moved for what feels like an eternity.

I’m sweating profusely, lying on the floor of the bus. There’s dirt, leftover junk food, and a lot of rust down here. I’m lying on my side, in the most uncomfortable position I can imagine, and I don’t care. There’s a plan, I think to myself, and when it works out, it’ll be worth my small measure of suffering.

It’s a small measure of suffering for the newest issues of Infinity Gauntlet and X-Men (both Uncanny and adjectiveless).

Being in my early teens, I can’t drive, and I live forty minutes away from the nearest comic store. My school is about a 10 minute drive from there, so I’d devised a plan: I would bribe the school bus driver with a pack of cigarettes, in exchange for him taking me out of the campus.

School campuses in the Philippines are quite strict, especially the ultra-exclusive Catholic school where I attend sixth grade. There are security gates that are too high to climb, and multiple sentries patrolling the campus. It almost feels like prison.

I’d approached the driver who normally picked me up as part of his route, and I asked what it would take for him shuttle me off campus and close enough to the mall where Filbar’s (the biggest chain of comic stores) is located. He told me that a pack of cigarettes would do. He just told me to lie down on the floor of the bus, and he’d tell security he was going to refuel. He would then drop me off a few blocks from the mall.

I am one step closer to finding out if the surviving super-heroes will beat Thanos, and learning who this new “Bishop” character is.

I can almost feel that paper in my hands.

This morning, I grabbed a pack of cigarettes for the driver, counted my money, and brought a change of clothes with me so I could wander around without the hindrance of my school uniform. I attended the first half of classes for the day, and did my vanishing act during recess.

I met up with the driver, and found myself a cozy spot at the back of the bus. It wasn’t the most comfortable place, but it’s a small price to pay…

Now I grunt as the bus jerks into motion and I wonder what brought me to this point.

To be quite honest, I don’t know why I’m doing this. Why go through all this trouble for comic books? It’s because I’m in love. It took a few years for me to feel that love, and it took a Mad Titan with a bejeweled gauntlet to get me here, but that’s a story for another time.

I just love the experience of reading comics. I love turning the page, and following the story, panel by panel, until it leads me to this massive explosion of art that I will grow to know as a splash page. I love the characters and their motivations, whether they’re good guys or bad guys. I am captivated by their stories. No matter how bad my day is going, despite my grades being kind of bad, I can always count on comics to lift me up, and whisk me away to a different universe.

From Infinity Gauntlet by Jim Starlin

Thanos just murdered half the universe with a snap of his finger. Magneto had reverted to his evil ways. And Jean Grey may or may not be dead again. I’m feeling down these days, and the only thing that gets me excited about anything is finding out what happens next.

And here I am, lying down on the floor of a school bus, impatiently waiting as the driver negotiates his way out of the campus. There is this sense of dread when the possibility of failure enters my mind. I’m not too worried about getting called to the principal’s office…I’m far more concerned that I might have to wait another day to read those comics.

Suddenly, the engine starts again. The bus rolls out of the campus, and the driver signals for me to get up. I take my usual seat, and start changing into my civilian clothes, exhilarated that I may have just committed the ultimate crime…all for comic books.

The driver drops me off, and I’m just a few blocks away from discovering the fate of all these characters that grip my imagination. I eventually make it to the store, get my books, find a spot where I can sit, and rejoin the war for the cosmos.

Thanos butchers all the heroes! Jean Grey switches bodies with Emma Frost, and Bishop arrives from the future! And Magneto has Acolytes now, and he brainwashes the X-Men Blue team!

This whole affair becomes a regular occurrence for me. First as a monthly endeavor, and by a year later, a weekly practice. I don’t have a car and don’t know how to drive, but nothing will deter me from my comics. I have fallen madly in love with them, and I will get my fix by any means necessary.

And as I get older, I find that my love for the medium remains the same, though I do not have to resort to subterfuge to get my fix these days.

My name is Pat Loika. I love comics.