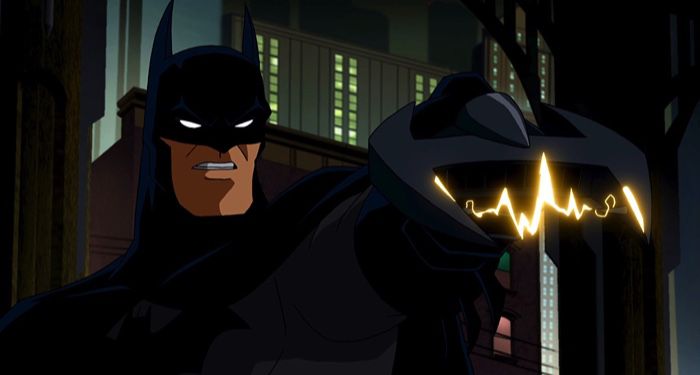 This week, we’re going batty once more with Batman: Under the Red Hood.

Yes, I will be moving on from DC properties—my plan is to jump into Vagrant Queen (Vault/Syfy) next, but time has been a little tight lately what with the unplanned homeschooling and…well, the unplanned homeschooling. And the constant presence of the entire family. Yes, I did choose to get married and have two children. But the other members of the clan were supposed to, at some point, go to work and school on the days I was home researching and writing. In fairness, no contract was signed, but I thought it was implicit in the agreement. Not my husband across the table with his earbuds in speaking at his normal volume which is truck horn while the kids talk over him and chew more loudly than anyone has the right to chew pancakes.

In 1988, DC comics fan voted Jason Todd off Batverse Island; in A Death in The Family, Robin Redux died in an explosion after being brutally beaten by the Joker. As is often the way in comics, he got better (though better is definitely relative here) and author Judd Winick resurrected the character as Red Hood (a nod to one of the Joker’s weirder variant looks) in 2005’s Under the Red Hood arc. Todd returned to Gotham with the intention of getting revenge not only on his murderer but also on Batman, who had taken Todd’s killer back to Arkham (the comics world’s least secure supervillain containment facility) rather than making a one-time exception to the BatCode and erasing the Joker from existence. Red Hood grabs Batman’s attention by eradicating the crime lords of Gotham with extreme prejudice and taking over their organizations. There is an inevitable confrontation during a storm interrupted by a more immediate threat, forcing a temporary truce after which the Hood escapes leading to the climax, etc., because there is a way These Things are Done. 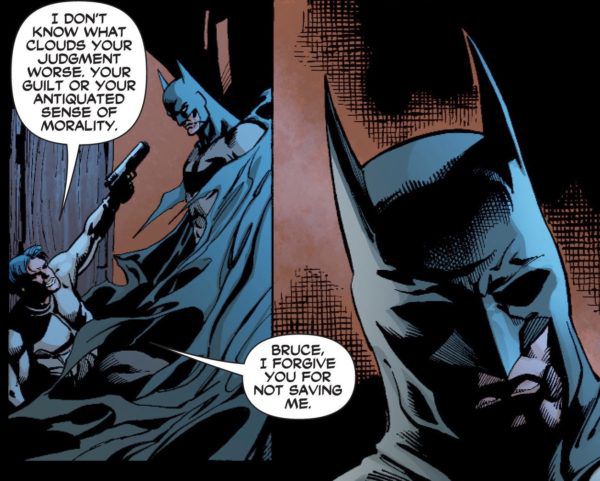 When I spoke to Winick earlier this year (about something entirely unrelated) he and I did end up chatting about Jason for a few minutes both because Jason is my favorite Robin (child stole the hubcaps off the Batmobile, can you imagine the audacity) and because Winick revisited the character in March’s Robin 80th Anniversary Super Spectacular. He mentioned at the time his original intention was to leave Jason’s return unexplained. Personally, I think that’s a phenomenal way to go but I’m apparently in the minority and the trade paperback of Under The Red Hood has a postscript issue explaining Jason’s resurrection (see: very complicated), and Red Hood: The Lost Days delves further into that storyline.

The Batman: Under the Red Hood adaptation has a distinct advantage of having the same writer as its source material. This could, in some cases, completely tank a project, but Winick is one of the good, nay, excellent, ones and he has a great feel for Jason and the Hood’s interactions with Bruce/Bats. Excellent calls all around.

Like Hush, Under the Red Hood is a pretty literal interpretation of the comic, even borrowing frames and dialogue directly from the book in some places. It’s a bit sleeker than the original comic both in terms of flow (most of the DC animated films are around 90 minutes so they can’t cover everything in a 12+/- issue arc and, again, as with Hush, I think Winick and company made the right calls on what to keep and what to cut) and visual style (’90s comic art didn’t end with the ’90s, kids). 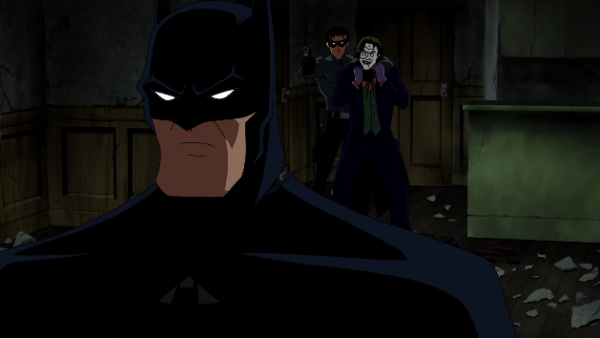 When we set out on this journey, I suggested that adapting a comic was an either/or prospect:  you could go literal or you could adapt the spirit of the book. I’m going to prove myself a liar here, though, by pointing Under the Red Hood out as an exception to the rule because to adapt this particular story properly, you need both. Not only do we need to see the tale unfold, we need to feel the damage it does to the major players, because at the time it was written Under the Red Hood was the arc in which Batman’s greatest failure, his failure to protect not just a Robin but one of his children, got thrown back in his face. And when he’s given a second chance to save that same child, he doesn’t. Not can’t. Doesn’t. Because the code by which he’s lived his entire life forbids it, and as much as he cares for his sons, there are some things he won’t do, even for them.

For this story to mean anything, for this to be more than simply another moment of Bat Pathos, we need to feel that.

I think we do.

Double pass for Under the Red Hood.

Next week, as promised, we journey beyond the DCAU and into the Vault-verse with Vagrant Queen. If there’s anything in particular you’d like to see get the Pass/Fail treatment, hit us up on the socials.