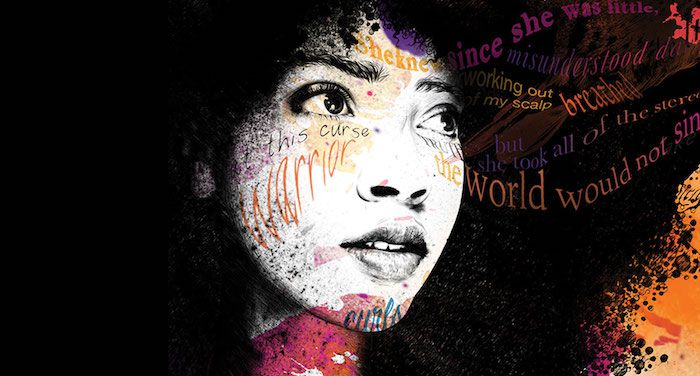 Calling Elizabeth Acevedo’s award-winning young adult novel The Poet X “a frontal assault on Christian beliefs and values,” John and Robin Coble filed a lawsuit against their 9th grader’s high school. The federal lawsuit seeks to remove the book from the child’s classroom.

The Coble’s claim that main character Xiomara’s language has a clear anti-Christian agenda, which “violates constitutional safeguards against government infringement of religion.”

Lake Norman Charter School released a statement noting that they would not censor or remove The Poet X from classrooms. The Cobles were given the option to select another book for their child but they refused.

Acevedo’s verse novel The Poet X follows Dominican-American Xiomara, a teen girl living in Harlem with her Catholic mother. It’s a story about self-discovery and acceptance, and like many teenagers, wrestling with her own religious beliefs is part of her story.

The Coble’s lawsuit calls the use of Acevedo’s book a violation of the First Amendment, stating, “The school’s plan to teach the book to the young impressionable minds in their public secondary school runs afoul of the basic precept underpinning the Religion Clauses — that government must remain neutral in the matters of religion and is certainly forbidden from promoting or endorsing materials that exhibit hostility toward any particular religion.”

Among the poems cited in the Coble’s complaint include Xiomara saying Jesus “feels like a friend … who invites himself over too often, who texts me too much. A friend I just don’t think I need anymore,” as well as her ambivalence toward partaking in Holy Communion. ““I can feel the hot eyes of the Jesus statue watching me hide the wafer beneath the (church) bench, where his holy body will now feed the mice.”

Xiomara also describes Mary as “an impregnated virgin who was probably scared s***less.”

The Coble’s claim, of course, fails to address how many “classics” of literature are tacit endorsements for Christianity, thereby also violating those same “safeguards.”

None of the books in Lake Norman’s curriculum are mandatory. Rather, students who are uncomfortable with the assigned text are given the opportunity to pursue other options. But when the Coble’s demands that The Poet X be removed was met with that option, rather than settle, they elected to pursue litigation.

They called the option for an alternate selection a “separate but unequal learning experience.“

In a formal statement, the school reiterated its commitment to vibrant classroom discussion and student readiness for participating in the world as a global citizen.

“The topics and situations found in literature often provide opportunities to help students learn to navigate their present world, develop their identities and learn about relationships, communication and their own physical, intellectual and emotional development,” the statement reads. ” A central role of public education is to teach young adults how to engage with challenging material by offering their own interpretations and hearing the thoughts of their fellow students. That hones their critical thinking skills — a vital part of being a fully developed adult. Our high school reading selections and thoughtful discussions led by our teachers do just that.”

It continues, “LNC will not fall to pressure to censor The Poet X or any of its other literary selections. Instead, we choose to view this as an opportunity to share our school’s core values and to model navigating differences of opinions and perspectives respectfully and civilly.”

Though the Coble’s claim centers on religious freedom, it’s hard not to see the language used in the lawsuit as far more about the fact the story is about a girl of color, written by an award-winning author of color, than it is about Xiomara’s wrestling with her faith.

Lake Norman students have responded to the lawsuit with positive statements about the way the book is taught in classrooms, as well as how this is a distraction from bigger issues in their school year.

“Teachers always reiterate the fact that it’s from a different point of view,” student Kit Kay said in a statement for Charlotte’s WCNC. “Whatever happens in the book might oppose our own views and beliefs, but that’s the whole point of reading the book so we get a wider view of what’s going on in the world.”

The school board meets this week to further discuss the lawsuit.