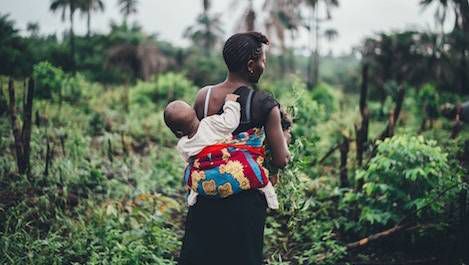 Earlier this year, I started to notice a trend in my reading. I had picked up two books in a row, both about pregnancy in a science fictional setting. Then I read a couple fantasies in a row about being parents. And when I looked at my galley stack, I saw yet another speculative fiction title oriented around babies. As a woman who never plans on being a parent (although I am an enthusiastic and dedicated aunt), I don’t seek these kinds of stories out. I sometimes even avoid them deliberately. Babies! They’re a thing, sure, but not usually what I’m interested in reading about. But I couldn’t stop thinking about this pattern—not for what it meant to me personally, but what it meant for the genres in question.

While there are lots of parents and children in sci-fi and fantasy (Darth Vader, Essun from The Fifth Season, Harry Potter), very rarely do they spend any time having adventures in tandem. And while pregnancy certainly makes appearances in SF/F, it’s traditionally part of “happily ever after,” or perhaps a side character who has to be protected from the roving bands of orcs/scavengers/insert baddies here. But these books took the stuff of pregnancy and parenthood as their subjects. And the harder I tried to find comparable books from past years, the less I could find, and the more revolutionary it seemed.

Within these five books, all published in 2017, there are two distinct groups: Apocalypse Pregnancy and Supernatural Parenting Is Fucking Hard. 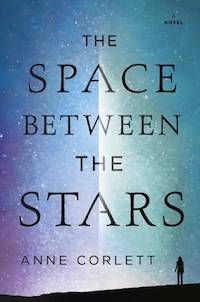 In the first group we have The Space Between the Stars by Anne Corlett (June 13, 2017), which is entirely about procreation and the potential end of humanity. Certainly there are epidemic and collapse plots aplenty in SF/F, many of which feature women as broodmares (hi Mad Max: Fury Road). But I’m hard-pressed to think of a book that’s done what Space Between did, which was to look from the perspective of a woman like Jamie. Fertility issues were the cause of her previous relationship’s disintegration, and that’s what sent her to the edge of human-settled space. When a deadly epidemic destroys 99.9% of the human race, all Jamie can think of is getting back to her childhood home on Earth. Along the way she and her companions experience the usual post-collapse hijinks (raiders, weird cult-like enclaves, government gone very awry) and discover the true source of the epidemic. The beating heart of this story is about who has, or does not have, children, and while Jamie isn’t what I would call “baby crazy,” maternity and its concerns give her arc a very definite shape. 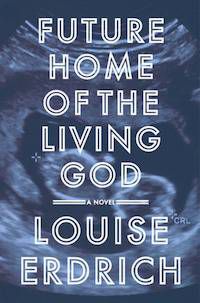 Even more explicit in this category is Future Home of the Living God (November 14, 2017), Louise Erdrich’s newest novel. When we meet Cedar Songmaker, she’s pregnant and on her way to meet her biological family for the first time, to find out about potential genetic issues. The world happens to be falling apart around her. All around North America, children are born who appear to be genetic throwbacks to pre-Homo sapiens: different brain structures, impaired speech and social abilities, different physiology, you name it. The reasons are unclear, and lots of theories ranging from plausible to completely wack-a-doodle are offered throughout the book. Cedar is fully aware of what could happen with her baby, but also fully invested in her pregnancy. Her adoptive white parents and her Native biological family have very different responses to her state, and then of course there’s the part where the world is going mad. Pseudo-religious ad-hoc governments are rounding up pregnant women, racial tensions are rising to the surface, and oh yeah, there might be a pteranodon in the backyard? Cedar ends up on the run and on a journey that is as horrifying as it is gripping. While Space Between focuses on what humanity has done to its own, Future Home takes a look at what we’ve done to the world around us through the lens of humanity’s uncertain future. 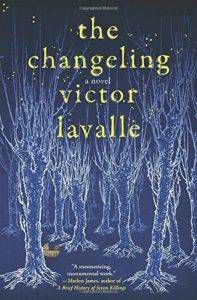 The Changeling by Victor LaValle (June 13, 2017) falls squarely into Supernatural Parenting Is Fucking Hard. The first third is dedicated to Apollo Kagwa’s wooing, marriage, and subsequent pregnancy with Emma. The early days of parenting are idyllic for him: he’s doing his best to be a New Dad, one who has feelings and changes diapers. But Emma is slowly losing her grip on reality, and in one night destroys their family with a shocking act of violence. Apollo’s quest to track down Emma in the aftermath turns out to be part of a much larger journey. Traveling through the dark and magical underbelly of New York City, Apollo finds that he’s not the only parent going through a version of hell. LaValle fits a lot of social commentary into The Changeling—race, class, and technology all come into it in large ways—but the plot always hinges on Apollo’s status as a father and husband, his relationship to his son, and his interactions within that relationship. 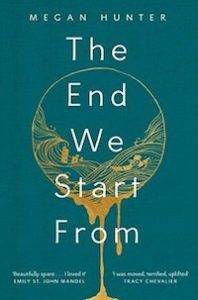 Less magical is The End We Start From by Megan Hunter (November 14, 2017). London has been submerged in an environmental disaster, and our nameless narrator has just given birth to her first child, Z. She, the baby, and her partner flee London, only to become separated. As she makes choices for herself and Z and works to raise a baby in ever-changing, never-certain circumstances, her identity as a mother is the anchor of her story. As I read this book, it struck me that it is speculative fiction only because of the specifics—a white woman fleeing a submerged London. Certainly there are mothers all over the world right now fleeing hurricanes, flooding, and man-made disasters and going through exactly this, if not much worse. Regardless, the author’s intentions were clear: what does the end of the world look like for a mother with an infant? It’s a very sparse and short novel, with minimalist prose, but the emotional heft is weighty indeed. 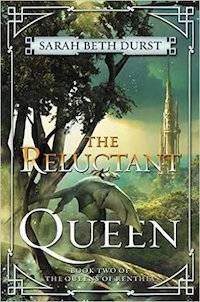 Leaving pregnancy and infancy behind, we end with The Reluctant Queen by Sarah Beth Durst (July 4, 2017), the second installment in the Queens of Renthia series. Daleina just wants a quiet life in her village with her two young children and her beloved, if hapless, husband. But her ability to control the malevolent spirits of her world, combined with the current Queen’s quest for an heir, means she is sucked into a political maelstrom far outside her experience or interest. The real surprise comes when she refuses to leave her children behind—they’re coming with her, no matter where she’s going, because she firmly (and often rightly) believes that’s the safest place for them. I literally cannot remember another mother going off into battle with her children in tow, and if you can I’d love to hear about it in the comments. Lots of mothers have to save the world, but how many of them actively parent while they’re doing it? Her children aren’t afterthoughts, or lurking in the shadows, safely tucked away; they have parts of their own to play in the story as it unfolds.

Metaphorical and creature-parenting have been around in sci-fi and fantasy since the early days. Mary Shelley’s Frankenstein, for example (worst dad ever!). More recently there is Borne by Jeff VanderMeer, which isn’t otherwise discussed in this piece only because the child in question is an amorphous, possibly bio-engineered, unidentifiable being, rather than a human. So why is it that there are so few literal parent-child stories in the genre? Commercial and literary fiction has explored, and continues to explore, the territory in innumerable, possibly endless iterations—why not speculative fiction? As these five books prove, the subject is far from boring and rife with possibility.

One might look at the current state of affairs in America and point to that as reason enough. What kind of world are we bringing children into? How do we explain what’s going on in this world to them, and how do we protect them from it? Except, as we know, novels are written long before they’re ever published. Some novels are decades in the making; most are separated by at least a year from manuscript to on-sale date. Which means that this batch of novels was likely written no more recently than late 2015 or early 2016. We can’t blame Trump for this one, and the questions posed above are questions parents have asked throughout history. Some of our most pressing issues today have been decades or centuries in the making: climate change and environmental collapse, racism, imbalances of power, economic disenfranchisement. But that just leads me back to the original question: what is it about the last few years that has given rise to these particular stories?

Does five books in a year constitute a trend? Are these the first in a wave of children-and-parent focused narratives in science fiction and fantasy? Or is it a blip on the radar, like the summer we got two asteroid movies at the same time? I don’t know. What I do know is that seeing parenthood treated as a subject worthy of exploration, not as a footnote to a plot but the main focus, is strangely encouraging. To me, it says that a stereotypically feminine part of life is being considered interesting and worthy of exploration. It says that marriage and family are not, contrary to popular portrayals, the end of the story. Sometimes, parenting is the adventure.