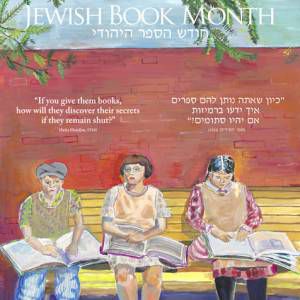 Each year, in the month before Chanukah, and thanks to the efforts of a public librarian in 20th century Boston, American Jews are given an opening to celebrate Jewish books. This year, Book Riot (or: me. I am. This list includes some of my perennial favorites.) is reading along with its own list of Jewish titles.

These thirty-two books include novels, biographies, a children’s book, textual criticism, works on Israel and the diaspora, and scholarship for Shabbat reading. There ought to be something here for everyone. Enjoy (and, please, contribute your own titles in the comments section)!

November 6th: Jews and Words, Fania Oz-Salzberger and Amos Oz. On how the written word binds Jews together as a community, against history and despite fluctuations in belief. Fania and Amos write with real poetic skill. Not everyone loves this book, but I cannot help but.

November 7th: Who Wrote the Bible?, Richard Elliott Friedman. The place to start if you’re interested in biblical criticism. Friedman’s text explores the authorship of the Torah, the first five books of the Hebrew Bible. One of my Bible professors sold it as a text-based mystery, which is an apt description. It’s edifying, engaging, and provocative.

November 8th: The World to Come, Dara Horn. This novel centers on a perhaps-stolen Chagall, but, like all of Horn’s books, it involves so much more. The Yiddish scholar’s sophomore novel incorporates Talmud, Jewish legends, history, and complicated family dynamics into a mix that’s hard to resist. Beloved in my collection and often recommended.

November 9th: These Things Happen, Richard Kramer. I always feel compelled to compare this novel to To Kill A Mockingbird. It’s hard to say why, though. Maybe it’s that it made me both laugh and cry; or that Kramer’s writing is jaunty and clever. Maybe it’s that Kramer tackles exigent social issues (in the case of These Things Happen: lgbt families and coming out as a youth). This novel acknowledges that the world is imperfect, but makes you feel pretty great about human potential, anyway.

November 11th (Veteran’s Day): try Alan Wolf’s A Purity of Arms, a memoir about serving in the IDF as an American Jew.

November 12th: Rise on Rosh Chodesh morning with the Women of the Wall, who will be davening to welcome Kislev at the Western Wall. They have a Torah scroll, they pray aloud, they wear tallitot and kippot. None of these behaviors sound radical, but man oh man do the old school religious fellows get stirred up over it. You can learn more about Anat Hoffman and her glorious band of Jewish women through Phyllis Chesler’s Women of the Wall, which is a diverse collection of essays that I love to pieces.

November 13th: technically still Rosh Chodesh! Keep the Jewish feminism rolling with Judith Plaskow’s seminal Standing Again at Sinai. Did I wake people up mumbling about sexism and minyanim after reading this? Sure. But it was also a spiritual salve. Cannot recommend emphatically enough.

November 15th: David: The Divided Heart, David Wolpe. Rabbi Wolpe is a gorgeous writer, and his approach to the infamous king of Israel reads as fresh and exciting. I chose this because it’s his most recent, but really, anything by Rabbi Wolpe is a treat.

November 16th: Black, White & Jewish and/or Ade: A Love Story by Rebecca Walker.The first is a memoir; the second, a multicultural novel; the author, the daughter of Alice Walker, with whom she has a tempestuous relationship.

November 17th: Kosher Nation: Why More and More of America’s Food Answers to a Higher Authority, Sue Fishkoff. On how kashrut has become an industry in America. I used Fishkoff’s book as a guide while keeping kosher, but it’s generally fun to read. You’ll learn about kosher wine-making, the complications surrounding certification, and the whys and wherefores of recent explosions of interest in maintaining biblically-based dietary standards.

November 18th: Sacred Trash: the Lost and Found World of the Cairo Geniza, Adina Hoffman and Peter Cole. On the Cairo genizah. Has been criticized for being dry; I don’t see that at all. This book fascinated me.

November 19th: My Promised Land: the Triumph and Tragedy of Israel, Ari Shavit. Explores the challenges and controversies surrounding modern Israel. Conservatives found it too liberal; liberals found it too conservative; I do believe that means he’s doing something right.

November 20th: The Dovekeepers, Alice Hoffman. Focuses on four women who find themselves at Masada at the time of the siege. Beautifully written. Wonderfully feminist. I hate how it was co-opted and diluted for television; skip that telling and stick to Hoffman’s novel.

November 21st: From Text to Tradition, Lawrence Schiffman. A fantastic text exploring Judaism during the Second Temple period. This was assigned to me as a textbook, but I absolutely love it and recommend it widely.

November 22nd: No One is Here Except All of Us, Ramona Ausubel. The only Holocaust novel on this list, and one that often avoids dealing with the Shoah directly. Its characters live in a shtetl certain to fall victim to Nazi forces, but they decide to resist encroaching villains for as long as possible by imagining that they’re somewhere impervious to evil. Strange. Lovely. Will stick with you.

November 23rd: The Septembers of Shiraz, Dalia Sofer. A Mizrahi family grapples with being marginalized and subjected to suspicion in the wake of the Iranian revolution. A novel from a non-Askenazi perspective.

November 24th: To Life!, Harold Kushner. An approachable, humorous, piquing and persuasive book on Jewish identity. Courtesy of a rabbi’s recommendation on my end; I adore it and pass it on to those curious about the tradition.

November 25th: Elijah’s Violin and Other Jewish Fairy Tales, Howard Schwartz. I may be reading this book with y’all! Just copied the title down while eyeing the bookcase of friends; ordered promptly. Seems like the perfect way to unwind in advance of Thanksgiving.

November 27th: Shalom Coloring, Freddie Levin. Oy, the tryptophan! You’ve got energy for plotzing, but not much else. Relax with this adult coloring book. (It counts!)

November 29th: Just Say Nu, Michael Wex. A fun introduction to conversational Yiddish; as much an appreciative text as it is an instructional one.

November 30th: One Hundred Philistine Foreskins, Tova Reich. A novel about a ferocious and controversial feminist rabbinical leader. You are guaranteed to have a strong reaction.

December 1st: Shekhina , Leonard Nimoy. A photographic celebration of the feminine divine. If you haven’t seen Nimoy’s photographs before, prepare to be awed. His accompanying text is also pensive and fantastic. May have to ILL it, but wholly worth any trouble.

December 2nd: In Her Shoes, Jennifer Weiner. Two Jewish sisters compete and wind their way toward a truce in this fun, and funny, novel from the feminist mainstay. The movie is excellent as well, and if you don’t follow Weiner on Twitter, you SHOULD, because she’s fabulous.

December 3rd: The Believers, Zoe Heller. Neuroses in upper Manhattan. Heller’s novel centers on a secular family (one daughter has gone to the dark side by becoming religious) who take Jewish liberalism to a whole new level. Heller’s characters aren’t really likable, but they are fascinating.

December 4th: The Sabbath, Abraham Joshua Heschel. As close as a theological text can come to poetry.

December 5th: Palaces of Time, Elisheva Carlebach. Again, a lovely book to own, but also a great text to study. A far-reaching exploration of the Jewish calendar; thrilling illustrations.

December 6th: Yentl the Yeshiva Boy, Isaac Bashevis Singer. Maybe you know the Barbra Streisand movie? Singer didn’t like it. (I do.) The word is that he meant for his Yentl to be transgender. Barbra’s Yentl is cisgendered, and disguises herself as a man to study Torah. I’m recommending that you read his version, watch Barbra’s film version (you deserve a little Mandy Patinkin after all of this reading!), and decide for yourself. (Two Jews, three opinions, right?)