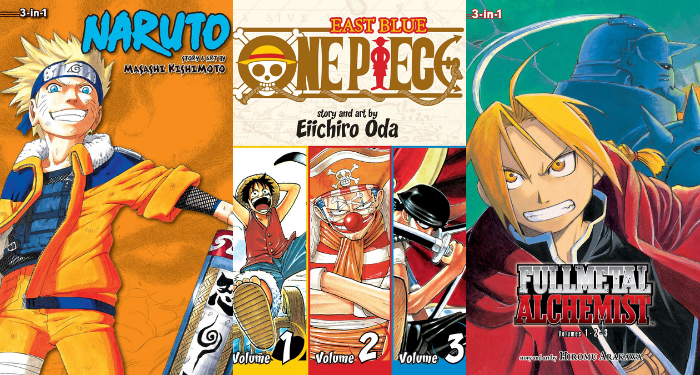 Manga is one of those unique reading experiences that can have you feeling totally lost among thousands volumes and totally broke from spending so much money. Thankfully, major manga companies like Darkhorse Manga and VIZmedia have come out with 3-in-1 manga volumes and manga omnibuses volumes to give readers a more accessible and less costly reading method.

A 3-in-1 volume of manga is basically three volumes of manga in one. It’s the Japanese comics equivalent to a deluxe edition of an American comic, only with more pages for less. A typical paperback copy of 3-in-1 volume of manga will be fifteen dollars and more five hundred pages long, while the price of a digital copy will be a few dollars less.

What is an omnibus of manga?

An omnibus of manga is collected volume of manga, which can contain entire story arcs or even an entire series. It all depends how long each manga series is. The omnibus editions also have bonus artwork in color. A typical paperback copy of an omnibus manga will be twenty dollars with more than 600 pages, with the digital price being less.

Why should I give either 3-in-1 manga or manga omnibuses a try?

3-in-1 mangas and manga omnibuses are perfect for new and old manga readers. In the early 2000s, I saw the single volume version of the manga series Magic Knight Rayearth, but didn’t get it because I couldn’t find the entire series. Then in 2011, I found the omnibus edition of the first Magic Knight Rayearth series at Barnes and Nobles.

Since it had the entire first series in one thick volume, I was a very happy reader. I loved the first Magic Knight Rayearth omnibus so much that I decided to get the second series in another omnibus when it came out the following year. Now I’ve gone from having none of the Magic Knight Rayearth manga to having the complete series in two beautiful books.

While the omnibus mangas may be best for those already interested in manga, the 3-in-1s are suited for new manga readers. You can start a series from the beginning without feeling lost, get comfortable with the format of manga, and get more for your money.

Can you collect them?

If you want to start collecting manga and haven’t bought the single manga volumes, then these can be ideal for you.  If you are already collecting manga in the single volumes, you might want to consider these as well. In a single volume of manga, you get 200 pages for ten dollars. A 3-in-1 manga or manga omnibus would give you your money’s worth in pages and save you from trying to find those hard-to-find first volumes.

Any downsides to these books?

The only downside to the 3-in-1s and omnibuses is that they can take a while to come out. When I bought the Magic Knight Rayearth II omnibus, I had to wait a year for it to be released. If you are willing to be patient, then it could be worth the wait.