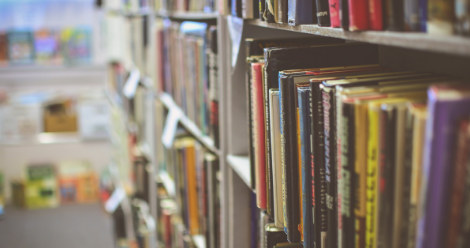 What do The Great Gatsby, Nineteen Eighty-Four, Of Mice and Men, and The Lord of the Rings all have in common? Sure, they’re among America’s most popular fiction books, but they also happen to be written by men. Over 80 percent of the 100 most popular novels were written by male authors, according to an interactive infographic created by Wordery.

There’s another qwhite telling thing all these books have in common.

A couple from Bhubaneshwar who have traveled across Odisha and now around India on a mission- make books available for all. They have traveled over 31,000 km across India in their minivan, and are carrying around 500+ poem books at the moment. Watch the video to know about their journey of love, life and solace.

People spreading their love of books to people without access to books is my favorite thing.

You know that feeling, when you’ve spent three…four…five hours on the couch, an empty bowl of popcorn on the floor, your legs slightly numb from misuse, and Netflix deigns to ask you that morbid question: “Are you still watching?” There are few things more embarrassing than when your streaming service passive-aggressively asks you if you have anything better to do with your Sunday afternoon. Then again, perhaps Netflix has a point. It may be easy to pick up the remote control and tell your condescending television that yes, you are still watching. What’s another 25 minutes in the grand scheme of things? But rather than watching the next season of your favorite sitcom (again!) you could pick up that novel sitting on the coffee table next to the forsaken popcorn kernels. Here is a list of novels you could be laughing at or mulling over instead of staring at your television set.

A pairing of books and popular sitcoms with different choices from what I usually see.