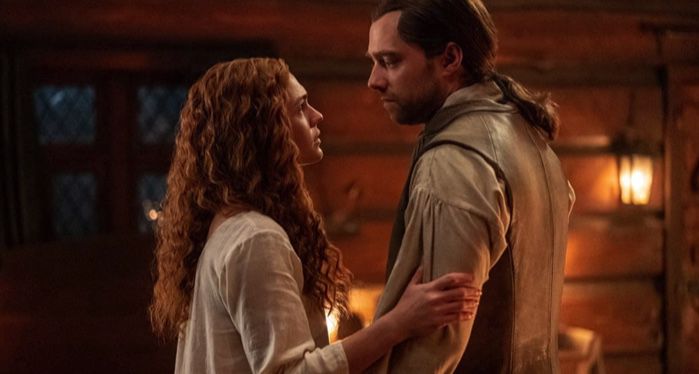 About ten years ago, when I first got a Kindle and discovered the many joys of ereading, I tore through The Hunger Games trilogy and then looked for more exciting books to load up my device with. Nearly everyone I knew was talking about the Outlander series, so I downloaded the free Kindle sample of the first book, Outlander, and started to read.

Friends, I found it so dull that I had to go to the Wikipedia page to find out what on earth the book was about. My reaction was sadly not filmed, but I like to believe I stood up in shock, knocking over my chair, and screamed, “It’s got TIME TRAVEL?”

To this day, all that I am certain I know about Outlander is summed up above. (I am also pretty sure the main characters are named Claire and Jamie. Like, certain enough to call them that throughout.) But surely, by merely existing in the same world as the nine novels (so far) and five seasons of the beloved TV series (so far), I have picked up some more interesting facts about Outlander in the interim.

And so, without further ado, I give to you four very accurate facts about Outlander as compiled by someone who has never read (or watched) Outlander:

1. It takes place in Scotland.

I am almost positive about this one! Scotland is a country in the United Kingdom, directly north of England, where Scotch whisky is made and Scots is spoken (as are Gaelic and English). Parts of Scotland are known as “the highlands,” where there is a Highlander (note the similarity to the word outlander) who is immortal and must kill every other immortal because there can only be one. This is most likely not portrayed in any of the Outlander books, but it might be.

Scotland is also the home of William Wallace and Robert the Bruce, whose names I know primarily from having fallen asleep instantly every time someone has ever tried to get me to watch Braveheart. (Don’t worry. No one has tried recently.)

2. Jamie and Claire have a LOT of sex. Also there is a lot of rape.

Listen, there is a reason the show is on Starz, and it’s either sex or violence, and probably both. Starz was also the home of Spartacus: Blood and Sand, another historical drama full of those things. I have also never watched Spartacus, but I have seen bits of it when my husband watched it back when Netflix was primarily a DVD rental company. It is very…gritty. I assume Outlander is the same.

I am not sure who rapes who, but I’m fairly confident the rapist isn’t Jamie or Claire. I believe at least one major rape scene involved a man raping Jamie, and furthermore I am fairly sure that is the only non-M/F sexual content in the series (at least the TV version).

Look, there’s a reason I don’t watch the show, and unlike the books, which I don’t read because they bored me, it is because I don’t need to see that shit.

3. Jamie is very good looking. Or maybe he isn’t, but he SEEMS to be.

I borrowed this one from something I saw on the internet the other morning, which I have already lost track of. Someone was pondering whether Sam Heughan, who plays Jamie and whose name I only know because I have watched The Spy Who Dumped Me a ridiculously high number of times, is actually good looking or just has features that match common ideas of male beauty.

The answer is both. His features are symmetrical, his eyes are spaced just right, he has a strong jaw, good cheekbones, and his teeth are straight. He is also charismatic, charming, and straight-up gorgeous. You’re welcome.

4. Claire is a nurse, but somehow is okay with living in the…I want to say 17th century? Also she is polyamorous, maybe.

Honestly, considering the number of healthcare workers who are refusing to get the COVID-19 vaccine, I am no longer surprised by this one, but: Claire was a nurse in World War II (this is one of the only things I read in the actual book), and her husband who she loves was a soldier (maybe?) and their marriage has changed, I guess, because war changes people, so when she goes back in time by accident (probably it’s an accident?) she has loads of sex with Jamie (see item #2) and falls in love with him but also still loves Fred or whatever his name is. I think.

Somehow she manages to deal with all manner of injuries and disease without modern medicine, and is fine with it. In 2021 this feels more believable than it used to.

There. That is almost everything I know about Outlander. You’re welcome!