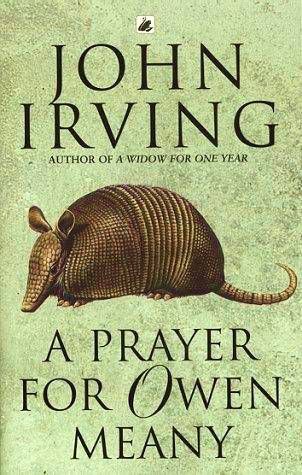 This installment of Our Reading Lives is from guest contributor Jodi Chromey. Jodi is a writer and blogger living in the Twin Cities area of Minneapolis. She write about books and things that are not books at I Will Dare. Follow her on Twitter: @jodiwilldare 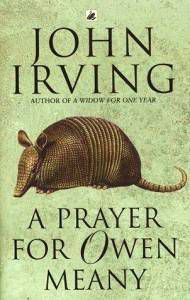 I had to pay a fine for keeping A Prayer for Owen Meany two weeks past its due date. This was in the last days of 1990. I was eighteen and had yet to grow into the book quitter I am today. The thought of returning it unfinished never occurred to me, neither did the idea of renewing it.

Back in 1990 I did not care so much for the first hundred-ish pages of OWEN MEANY (you have to type the name in all caps, right? Out of respect?). It was a strange time in my reading life. I was adrift. Out of high school but not yet enrolled in college due to an oversight by my poverty-stricken parents, I was a self-guided reader and wandered around the Chippewa Falls Library checking out anything that looked remotely interesting.

Being left to my own reading whims exacerbated the crushing loneliness. There were no teachers to assign books. My friends were a hundred miles away in the place I called home, not in the small Wisconsin town where I was living with my parents and three sisters. We would write letters about what we were reading, which seems positively Jeffersonian now, but before email and in the days when long distance phone calls were expensive, it was all we had. Even so, a few letters a month could hardly keep up with my voracious reading appetite.

I was restless and unhappy. I could feel myself growing out of young adult books, especially after I had exhausted the entire catalog of M.E. Kerr. My beloved Sweet Valley High books had grown predictable and boring, and yet I was totally disappointed in grown up books.

Until I discovered John Irving, grown up books consisted of Judith Krantz, Danielle Steele, Jackie Collins, and any other glittery-covered romance novel displayed in the checkout aisle of the grocery store. That was, after all, where my mom bought all her books. I grew up on a steady diet of her castoff grocery store lit and at eighteen I was sick of it.

I only picked up OWEN MEANY because it sat on the shelf next to The World According to Garp, and I had liked that movie. So with that in mind I gave OWEN MEANY a shot. I wish I could remember why I didn’t like those first hundred pages, what made me drag my feet. What I do remember is that once I hit a tipping point I could not be separated from OWEN MEANY and I spent every waking moment immersed in the world of Gravesend, New Hampshire.

Until OWEN MEANY I was a pretty egotistical reader. I only liked books I could relate to featuring characters that were like me. Lucky for me, I had a very nebulous idea of what “like me” meant. But OWEN MEANY? He was nothing like me; none of the characters were like me, and yet I fell in love with this book so hard it changed my life.

For the past twenty or so years, I’ve been trying to figure out why. What was it about OWEN MEANY, aside from the fantastic writing and the compelling story?  My short answer has always been that it showed me how beautiful and powerful language and storytelling could be. Boring, and probably not entirely true. After all, I’d been an avid reader my whole life and I’d read a lot of good books up to that point. It had to be more than that, didn’t it?

And it was. OWEN MEANY was the first book where I got to discover on my own all the stuff my English teachers had been yammering about my entire life. There was symbolism! There was metaphor! There was foreshadowing! I could see it and it was amazing. It was as though there was a whole other story underneath the main story. There was so much going on my brain could hardly keep up.

I don’t know why finding these things in a book all on my own was so much more fulfilling than when an English teacher forced the issue, but it was.

OWEN MEANY was the first book I can remember that engaged me not just on an emotional level, but also on an intellectual level. I was amazed that a book could even do that, especially a book you could just check out of the library all on your own without being told how to read it.

I don’t often think about how my reading life would have turned out had I returned OWEN MEANY on time, probably filled with meaningless chick lit and Nicholas Sparks, the thought of which is enough to give me the SHIVERS.