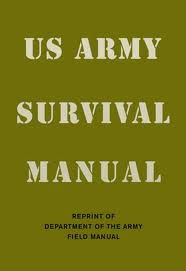 According to the United States Army Survival Manual, “Plants can provide you with medicines in a survival situation. Plants can supply you with weapons and raw materials to construct shelters and build fires. Plants can even provide you with chemicals for poisoning fish, preserving animal hides, and for camouflaging yourself and your equipment”. Of course, it then goes on to tell you exactly which plants to eat, which ones to avoid, and which ones work best in specific situations. Because that’s what survival is: rediscovering your immediate surroundings so that you can go on living. The same plants were always there, part of the background noise of a hostile environment. But after reading a survival manual, you’re able to sort of create a brand new environment. Plants that looked delicious before, bright red and heavy with dew, you might know now to avoid. Trees that were invisible become your shelter. Foreboding skies become messages from the near-future.

And books do the same thing. They have for me. A first and less dramatic example was during high school when I lived an Atlantan suburb that could have been lifted straight from a David Lynch movie. Now, I know how problematic it is for a middle class white male to complain about growing up in the suburbs, but you’ll just have to take me at my word when I say that I didn’t fit in. Why wasn’t being on the football team fulfilling anymore? Why did church services make me feel uncomfortable? Why didn’t any of the houses, cars, strip malls, or gossip about neglected lawns satisfy me? I figured it out when I read On The Road. It fell into my hands and unfolded like a map. “Here you are, right here,” Sal Paradise pointed. “And where you want to go next is up to you.” And then Ginsberg chimed in with his own Holy rant and suddenly I got it: You feel weird because you are! Everyone  is weird. Some people are just more boring about it.

I quit the football team. It was great fun, but time for me to go. The berries tasted great, but they were poison. My environment had changed. I had the hunger pangs of that weird adolescent appetite that, if starved early, dies a slow and tormenting death. But I had my survival manuals. I knew what I needed and how to take care of myself. I would be all right for a while.

The next example, and the one probably more relevant to the metaphor, was during my second deployment in Iraq. We were in an incredibly barren area along the Iranian border called the Diyala Province. Unlike my first deployment in Baghdad a few years earlier, things were pretty boring. And by that I mean that there weren’t gunfights. There were miles of criss-crossing country dirt roads littered with mines left over from the Iran-Iraq war. We would patrol the roads to keep the insurgents off of them who were lacing the roads with the leftover mines because we were patrolling them to keep…

Obviously a fitting place for a survival manual. I went about it in two ways. The first was a relatively abstract and heady trip through Modernist literature under the tutelage of Hugh Kenner, the late Canadian literary explainer par excellence. A point of psychological importance in the Army Survival Manual is to not forget who you are. This is what Kenner gave me. Books like A Homemade World and The Pound Era kept me connected to an interest that was as dear to me as it was far removed from my present conditions. There’s nothing like Kenner teaching you about Hemingway’s use of nostalgia to distract you from flying dirt and diesel fumes.

The other manual was Roberto Balano’s 2666. Now, anyone whose ever experienced this huge novel will be wondering why I would even read such a disturbing meditation on violence and death in a war-zone, much less use it as a means of psychological succor. But you have to understand that not only do survival manuals prescribe action, they explain phenomena. Who better a guide than Balano for finding a way to put all this pointless and random violence into a context. To give it order and meaning beyond my own personal experience of it.

And that’s important. Not just in high school or a war zone, but for everyone anywhere. Great literature, books that move you and shake you and leave you somehow different afterwards are more than just diversionary. They’re necessary to survival. Don’t leave home without one.

Scott Beauchamp is a writer living in New York.