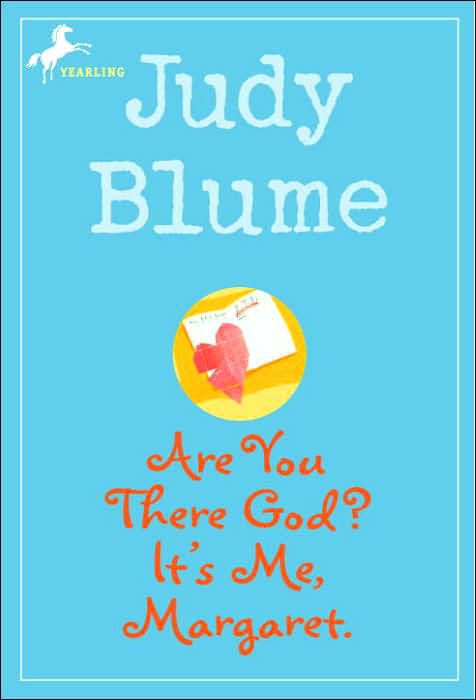 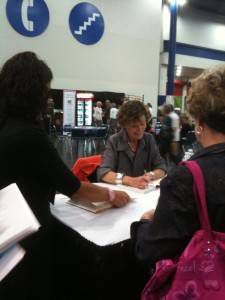 Wednesday morning saw me driving like a mad woman to get to the convention center before the exhibit floor opened at the Texas Library Association’s annual conference. One of my earliest author idols, Judy Blume, would be signing books for just over an hour, and because I knew she had something coming up on the schedule right after that, I was determined to get as close to the front of the line as I possibly could.

I made it on time, and I walked as calmly as I could (some people outright ran) to the back of the exhibit floor, where the line was forming. I lucked out and got in the middle. I waited patiently, chatting with one of the librarians in line who had been kind enough to lend me the quarter I needed to have enough to buy a book for signing (I hadn’t realized that I needed cash). I made a comment about how my inner fourth grader was jumping up and down with excitement, as Judy Blume was one of her…I mean my…early idols.

It turns out that I was not alone in my fourth-grade fandom. Tweets started coming in from various people asking that I say “thank you” from their fourth-grade selves, too. When I tweeted a somewhat blurry picture of Judy signing, even the Texas Library Association responded with a Twitter squeal (Eeeeeeeeeeeeeee!). As I moved through the line, talking to the nice woman about the authors that we would love to meet if we had the chance, I realized just how much my list of author idols has changed over the years.

I was not really aware of the whole idea of an author when I was reading picture books. I loved a good story. My favorite was If You Give a Mouse a Cookie. When I re-discovered a book as a high school senior, I became fascinated with Laura Numeroff and all the various tales she had written after that first book. I got to meet her a few weeks ago. My boyfriend and I took his daughter to an event where Numeroff read from the newest book, If You Give a Dog a Donut. It was pretty awesome, but it did not mean nearly as much to me as it did to the little one.

In high school, I would have killed to meet Madeline L’Engle or George Orwell. I’ve missed my chance. In college, though, I did get to meet one of my author idols from my high school reading.  My university brought Elie Weisel, author of one the most moving books I have ever read, Night, to speak in one of the fancy old theaters in downtown Knoxville. Our encounter was very brief, just a hand shake, but I felt like I was touching history. It was a humbling experience. During my years at the University of Tennessee, I also got to see Maya Angelou and Kurt Vonnegut speak. I almost ran into Vonnegut in the hall, apologized, and I didn’t even realize it was him until he took the stage later that evening. 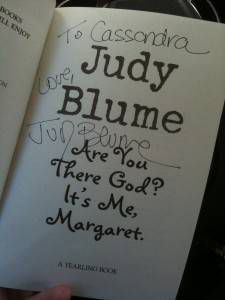 Since college, my list of author idols (based entirely on the relationship that I have had with their works) has stayed pretty static. Now that I am blogging and attending book events, it is a lot easier to meet the authors who fascinate me. Last summer, for example, I met Neil Gaiman. It was not a traditional book event, but it was my best bet, given that he was about to head out on tour to promote the 10th anniversary release of American Gods, and most of those stops were sold out. I have also met Salman Rushdie and Margaret Atwood. I’ve met a few really amazing debut authors, too, ones that will be a big deal some day. I have been incredibly lucky in that none of these encounters has disappointed me.

You might think, now that I’ve met a few of my idols, that the magic might be gone. You’d be wrong.

As I stood there in line, getting ready to meet the great Judy Blume, I prayed that I wouldn’t get tongue-tied. I knew I had just a moment to say thanks, not just for myself, but for all those other fourth-graders (both actual and emeritus) out there. And I did it. I was flustered and giggly, but I did it. She says thanks to all of us, too.