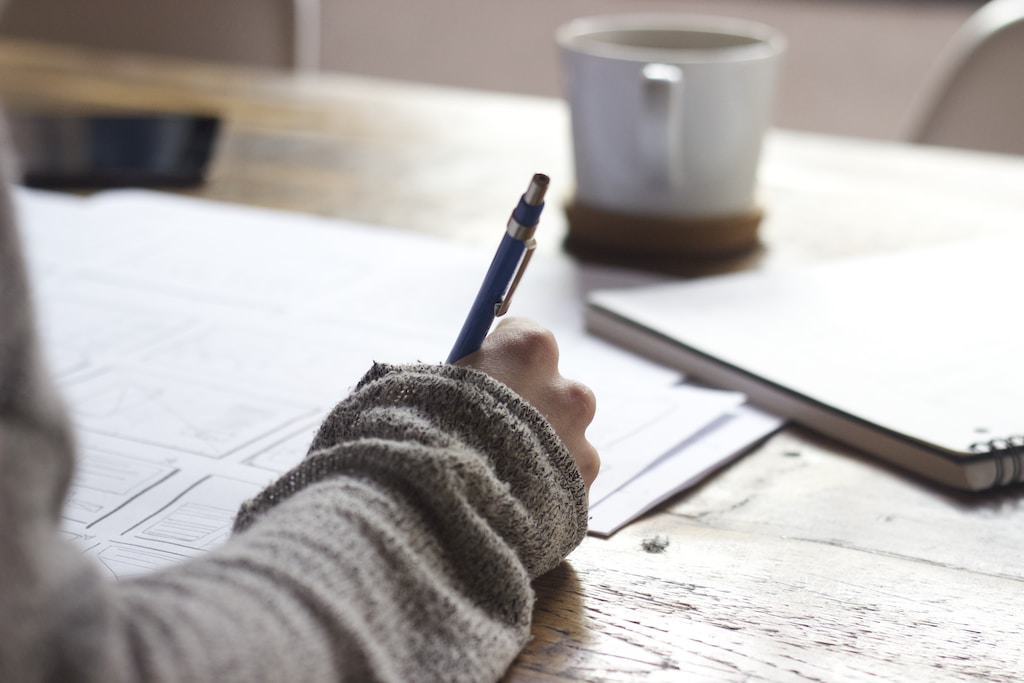 This installment of Our Reading Lives is by Paul Montgomery. Paul  writes about comics and what they can do on iFanboy.com. With David Accampo, he co-hosts Fuzzy Typewriter , a podcast dedicated to story, storytellers, art and artists.

I’ll generally opt to solve a crossword puzzle in ink, and not just because I’m the kind of clod who walks away from every encounter with a pencil looking like a retired chimney sweep. As venues for mental calisthenics, crosswords famously keep cloistered nuns alive and cunning until they’re all but petrified, but they also demand a special kind of arrogance. Especially since no one’s forcing us to complete them. The mitts come off and the rollerball comes out. Even if it means crossing things out (It does always mean crossing thing out). Because, when it comes down to it, misplaced hubris is my favorite comedic trope.

I’m unable to summon that same brash spirit when I’m reading. Not in ink. Not even in graphite. Here’s the thing. I desperately want to. But the prospect terrifies me.

I have friends who write in their books, fiction or non. That sentence works even if the modifier’s dangling. Which I suspect it might be. Jess on Gilmore Girls? He wrote in books. And that’s the chutzpa I’m talking about. I look at the people who write in their books with the same kind of awed reverence that Sal Mineo applied to James Dean. Which likely says something about my conception of rebellion. No lie, I even used a separate sheet of loose leaf for my Mad Lib responses.

I was that bashful kid forced to observe eye contact in terms of a daily quota. Dutiful and compliant, my constant intent was invisibility. So, when Sister Joan (oh, wow, more nuns) called me up to her desk in the waning days of third grade to interrogate me about the grocery list of dirty words she’d found scrawled in the back of my Social Studies text book–I recall ‘qeaf’ and ‘pubes’ among the tawdry unmentionables mentioned–I was well and truly mortified. I have no recollection of my response, though what I probably wanted to articulate was, “If you’ll look at my record, this isn’t really my deal. It was probably one of those heathen CCD kids who use our desks on Thursday nights.” I likely just cried. My teacher eventually deduced that I probably wasn’t to blame for defacing a communal text book vulnerable to bawdier sensibilities than my own and all was soon right with the world again.

I’d practice my signature before writing my name in the front of a chapter book, only then when it was required that I label it as specifically my possession.

Later in life I’d compose and submit essays and term papers, my own first stabs at authorship, only to have them return with notes in the margins. If I’d bungled an argument or misinterpreted some musty philosopher’s thesis, I appreciated my teachers’ annotations. But what of the aced papers? One professor returned an essay with a high grade. She’d underlined a passage and wrote “erudite” alongside it. I was grateful she liked the line, but I remember wondering for a long time why she’d chosen to write that word.

Because here’s the other thing. While slipping the surly bonds of my own prudishness to unsheathe my pen upon the untrespassed sanctity of space (to borrow liberally from J.G. Magee) is one obstacle between me and tattooing the face of God (God being Literature with the big L, I guess), reverence isn’t the only thing in my way. I also have no idea what I’m supposed to say.

Underlining, I get. I’ve seen it in enough used textbooks and yellowed required reading novels to understand and appreciate a previous reader’s declaration of profundity. I’ll even nod at it. “I totally would’ve underlined that too. That line is dope.” That said, it genuinely freaked me out when I discovered unbidden underlinings on my Kindle. At first, I thought the dotted lines of emphasis were a glitch in my ereader or the ebook file. Then I realized that these marked passages were things I myself would’ve noted, given the choice. Had I been sleep-highlighting? Was there some chronically contemplative burglar molesting my ereader each night as I slept? Would this have any affect on my credit score? I eventually gleaned that these notations were popularly underlined quotations, though I’m still not sure how such things are aggregated or maintained. In a way though, this abnormality has engendered a deeper interest in marking up my own flesh-and-blood books. I want to underline too.

Definitely not “erudite.” Which is a little too cosmopolitan and redundant for me personally. Do I write questions? Do I try to identify the culprit of the crime before it’s revealed in the novel’s resolution? Do I connect things with arrows, and for what purpose?

I know, on a molecular level, that important things are being written in margins. I just don’t know what those things are and if I, myself, have the capacity to contribute despite a burning desire to cast off my puritanical ideologies and do so. Tempestuously.

Because what if I write the wrong thing? What if someone finds my copy of The Yiddish Policemen’s Union or Pulphead at a rummage sale and discovers my annotations? And what if they surmise the darkest truth? That I’m not nearly so insightful as I think I am? Or worse, that I wasn’t nearly so insightful as I thought I was. Because I’m dead at that point. And even if I could muster a rebuttal to that secondhand reader, I can’t muster it at all. Because I can’t even muster a pulse.

In the end, maybe it’s a more classic fear. It’s not that I’m worried about permanence. It’s the impermanence that kills me.