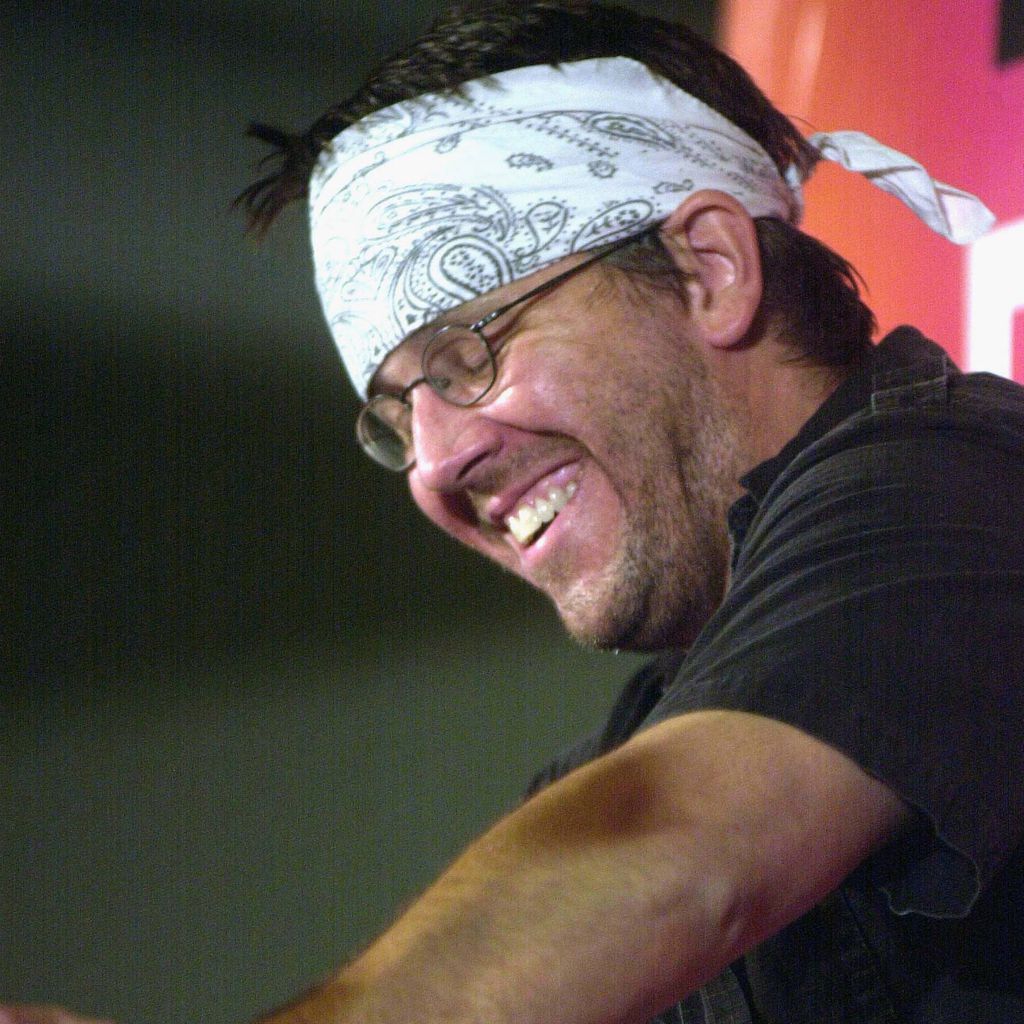 This is a guest post from Jake Offenhartz. Jake is a fledgling writer (but otherwise decent person) as well as a production assistant at Michigan Radio, an NPR member station located in Ann Arbor. He graduated from the University of Michigan in May, so he’ll probably start feeling like an adult at any moment now. You can read his tweets or his blog, but wouldn’t you rather just go outside or something?

Last weekend I went out and bought Although Of Course You End Up Becoming Yourself, the transcription of five days worth of conversation between Rolling Stone critic David Lipsky and David Foster Wallace. The conversations, recorded in 1996 on the book tour for Infinite Jest, inspired that new DFW biopic, which has in turn inspired content creators™ everywhere to dust off their half-read copies of Infinite Jest and pen a few nice words about the late author.

One of the few not horrible thinkpieces on the subject, “Rewriting David Foster Wallace,” comes from Vulture, and includes this observation:

There will always be readers who look to novels and novelists for instruction on how to lead their lives. Wallace, foremost among his contemporaries, seems especially to attract these readers (whatever the other pleasures to be had from his books). He courted them with bromides about brains beating like hearts, literature as a salve for loneliness, and novels comforting the afflicted and afflicting the comfortable.

As a card-carrying member of the DFW fan club, this rings true, though not in a particularly comforting way. I’d like to believe I’m capable of thinking for myself, of recognizing that a lifelong depressive and one-time Reagan-supporter may not have all the answers to life’s big–or even medium–questions.

And yet, as I traced the pair’s winding conversations on Updike and futurism and Alanis Morissette, I found myself underlining Wallace’s most insightful prescriptions, wondering how he’d advise me personally. I imagined materializing in the backseat of the rented Grand Am–Hello Davids, I come from the future, where things are even stranger than you’d imagine.

Of all the wisdom dispensed throughout the road trip, it is Wallace’s perspective on our relationship to technology that I found most compelling. His prescience is uncanny, calculating the impact of Twitter’s micro-blogging platform at a time when none of those words meant anything, explaining our collective Facebook obsession when Zuck was not yet a teenager. Most striking, he’s able to talk about what it means to be dependent on passive entertainment with a bracing sincerity that we, the people of 2015, cannot muster.

It’s been a few years since The Atlantic ran a cover story asking “Is Facebook Making Us Lonely?” We’ve indifferently accepted Google–achem, Alphabet–as our omnipotent overlords and grown weary of articles claiming this butt or that cat will save and/or break the Internet. We are proficient in the art of hyperlinking. The Internet is our home now, and we’ve lived here long enough that the charms and horrors of relocation have finally worn off–that creepy noise from the basement is best ignored, the leaks are regular, predictable.

One consequence of this, I think, is that it’s become impossible to talk about the Internet in 2015 with any sort of detached perspective. I’ve written like 700 cover letters claiming to be a digital native, yet I have no frame of reference to investigate what this decidedly alien pedigree means in the context of being an actual human. We are the young fish in the introduction of Wallace’s now viral commencement speech, consumed by something we can’t fully comprehend. The difference, of course, is that the fish in Wallace’s parable need water to survive, whereas we were getting along just fine before the Internet came along and engulfed us.

And so, because I am one of those fools who looks to a fallen hero for direction, I’ve gone ahead and committed the exact sin that the “Rewriting of David Foster Wallace” warns against–I’ve reconfigured Wallace’s words as if they apply to my life.

[The following responses were spoken by David Foster Wallace and transcribed in David Lipsky’s book, Although Of Course You End Up Becoming Yourself. The questions are mine. Obviously, this is not an accurate representation of Wallace’s thoughts on anything.]

Our Internet Lives, as Prophesied by David Foster Wallace

Jake, 2015: I spend hours each day mindlessly scrolling through a Facebook newsfeed that I derive zero enjoyment or value from, and yet I can’t stop. What gives?

DFW, 1996: [I]t gives the illusion of relationships with people. It’s a way to have people in the room talking and being entertaining, but it doesn’t require anything of me…I can receive entertainment and stimulation. Without having to give anything back but the most tangential kind of attention. And that is very seductive.

The problem is it’s also very empty. Because one of the differences about having a real person there is that number one, I’ve gotta do some work. Like, he pays attention to me, I gotta pay attention to him. You know: I watch him, he watches me. The stress level goes up. But there’s also, there’s something nourishing about it, because I think like as creatures, we’ve all got to figure out how to be together in the same room.

…For us, it’s gonna be that at, at a certain point, that we’re either gonna have to put away childish things and discipline ourself about how much time do I spend being passively entertained? And how much time do I spend doing stuff that actually isn’t all that much fun minute by minute, but that builds certain muscles in me as a grown-up and a human being? (85-86)

Suppose we’re aware that we should be building these muscles, and still choose not to. Is that proof of an unhealthy relationship to our entertainment? Even the vocabulary of this stuff suggests an addictive tendency–we’re not just watching anymore but “binging”…

So I think it’s got something to do with, that we’re just–we’re absolutely dying to give ourselves away to something. To run, to escape, somehow. And there’s some kinds of escape–in a sort of Flannery O’Connorish way–that end up, in a twist, making you confront yourself even more. And then there are other kinds that say, “Give me seven dollars and in return I will make you forget your name is David Wallace, that you have a pimple on your cheek, and that your gas bill is due.”

And that that’s fine, in low doses. But that there’s something about the machinery of our relationship to it that makes low doses–we don’t stop at low doses.

If we don’t do that, then (a) as individuals, we’re gonna die, and (b) the culture’s gonna grind to a halt. Because we’re gonna get so interested in entertainment that we’re not gonna want to do the work that generates the income that buys the products that pays for the advertising that disseminates the entertainment. It just seems to me like it’s gonna be this very cool thing. Where the country could very well shut down and die, and it won’t be anybody else doin’ it to us, we will have done it to ourselves.

So between now and our self-imposed annihilation, what do we expect from literature? Do we have even need novels anymore?

Yeah, there’s stuff that really good fiction can do that other forms of art can’t do as well. And the big thing, the big thing seems to be, sort of leapin over that wall of self, and portraying inner experience. And setting up, I think, a kind of intimate conversation between two consciences.

And the trick is gonna be finding ways to do it at a time, and for a generation, whose relation to long sustained linear verbal communication is fundamentally different.

Fundamentally different, or fundamentally worse? People are fond of saying that Twitter is eviscerating our attention spans…

You’re talking about nobody will be trained to read the way we read. Which means that if people are reading in more short bursts or whatever, that art will find a way to form conversations with readers in the brain voice or vernacular that they’ve got. And for a while, when they, you, what’s–is it Nietzche’s term or Heidegger’s term? “The old gods have fled and the new gods have not come”? It will be a bleak time. But I mean–Jesus, if the thing made the jump from oral, you know, jongleur ballad, to printed text, then I think it can–[at this point he misses the turn for the airport and gets distracted, but I think the message is hopeful…we will adapt] (92).

OK, so this right now is that bleak time? In that case, how do I establish my personal brand?

um um um um um. This business of–this business about marketing yourself, there’s nothing wrong with that. Unless we’re allowed to think that that’s–that that’s it. That that’s the point, that that’s the goal, you know? And that’s the reason we’re here–because that’s so empty. And you as a writer know that it’s–if you as a writer think that your job is to get as many people to like your stuff and think well of you as possible. And I could, we could both, name writers that it’s pretty obvious that’s their motivation? It kills the work. (165)…

What writers have is a license and also the freedom to sit–to sit, clench their fists, and make themselves be excruciatingly aware of the stuff that we’re mostly aware of only on a certain level. And that if the writer does his job right, what he basically does is remind the reader of how smart the reader is. Is to wake the reader up to stuff that the reader’s been aware of all the time. (41)