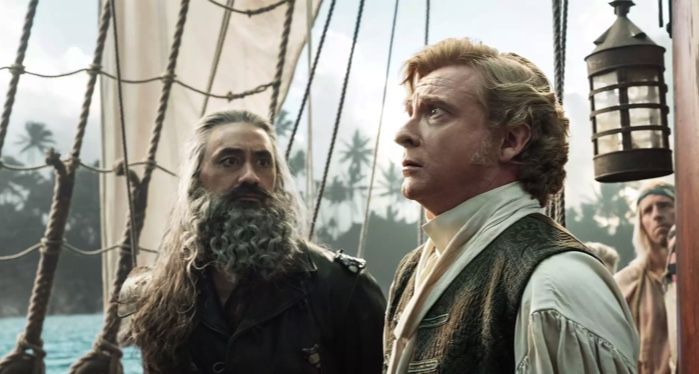 *Warning that there will be spoilers for the series in the descriptions of some of these fanfics. Proceed with caution!*

So you’ve finished watching the HBO series Our Flag Means Death, and you want more. After that cliffhanger of an ending, who could blame you? And you’re not alone. Fans all over the internet have been going wild for this show and creating tons of fan-made content to hold them over while we wait for the next season. That means memes, fan art, and, yes, lots and lots of Our Flag Means Death fan fiction.

Thankfully, news broke earlier this month that Our Flag Means Death has indeed been renewed for a second season. But as of right now, no filming plans have been announced, which means it could still be quite some time before season 2 sets sail. That’s where fan fiction comes in to fill in the blanks while we wait to see what the fates of Blackbeard, Stede, and the rest of the crew will be.

If you’ve somehow missed the runaway hit series Our Flag Means Death, here’s the deal. The historical romcom follows the story of the gentleman pirate, Stede Bonnet (Rhys Darby) and Edward Teach, AKA Blackbeard (Taika Waititi). At first, the two form an unlikely friendship, which slowly evolves into a beautiful romance.

The show’s storyline is ripe for fan fiction. Not only are we dealing with pirates and a heartwarming queer romance story, but there’s also a large cast of diverse characters. And everyone has their favorites. In the few months the series has been out in the world, Our Flag Means Death has already inspired so many fan fictions. Here are some of the best fanfics worth walking the plank for.

“on the bed of this blue ocean” by kirkaut — Set after the last episode of season 1. Ed has sailed the high seas for six months without Stede, and he’s decided if he ever lays eyes on Stede again, he’s a dead man. If you like this one, also check out the companion piece “be the wind to blow me home.”

“Time makes you bolder, children get older” by mtothedestial — If you love Jane Austen’s Persuasion and you love Our Flag Means Death, this is the fanfic for you. This is a reimagining of Persuasion with Stede and Ed subbed in as the two main characters.

“keep us together” by novaeangliae — This fanfic is an AU where Stede and Ed were once childhood friends. Their lifestyles pull the two in different directions, but when they meet up again on the deck of a Spanish warship, they realize nothing can keep them apart for long.

“Aftercare” by perkynurples — At the end of the first season of Our Flag Means Death, Stede and Ed have been separated, and it’s not yet clear how they will find their way back to each other. In “Aftercare,” a currently ongoing fanfic, the couple are finally reunited and start to work through the issues that pulled them apart.

“I’m Glad I Spent it with You” by softoctober — This one-shot fanfic picks up right where season 1 left off. Two days after the events of the season finale, an extremely overcrowded rowboat filled with Stede and his crew arrive alongside The Revenge. But can Ed and Stede work out their differences?

“Slow Dance” by threerings — This is a sweet and sexy on-shot in which Stede and Ed discuss the terms of their sexual relationship. This is all build up and then fade to black, so if the part leading up to the sex is the most enticing to you, you’re going to love this one.

“The Accidental Seduction of Edward Teach by Stede Bonnet, Gentleman Pirate” by downstar — If Calico Jack hadn’t betrayed the crew of the Revenge to the English and Ed and Stede had stayed together on the ship, what would have happened? This fanfic takes us back and imagines the slow burn romance the two pirates would have had.

“The Only Hope for Me is You” by Bexby — For something a little bit different, this fanfic imagines Ed with an original male character created by the author. When an English admiral boards the revenge, he becomes very interested in a grieving Edward Teach.

“A Gentleman’s Guide to Love and Piracy” by laiqualaurelote — What’s great about this one is that it really captures the humor of the show. The author of this fanfic asserts that underneath it all, Our Flag Means Death is a workplace comedy, so that’s the vibe here. Stede Bonnet is attending the International Piracy Convention with a few goals in mind: rebranding, making some industry contacts, and figuring out how to get his ship back without getting murdered by Blackbeard, who also happens to be the keynote speaker at this conference and the love of Stede’s life.

“Smiles in a Meadow” by ramsay_baggins — If you’re looking for something truly sweet, check out this fanfic. This one imagines a date between Ed and Stede in which Stede takes Ed out for a picnic in a wildflower meadow. As a bonus, this one also includes fan art.

Need even more recommendations to tide you over until the return of The Revenge and our favorite gay pirates? Here are 10 books like Our Flag Means Death you’ll love to read, whether you’re a gentleman pirate or a Blackbeard.

Just wanting to read more fanfic from other shows you love? Here are some recommendations for the best Bridgerton fanfic.

Looking forward to seeing what the fans come up with for season 2!