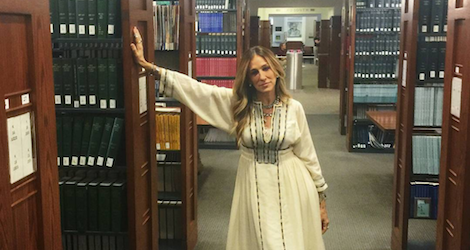 Social media has allowed us some wonderful sneak peeks into the lives of famous people we adore and admire. But beyond all other insights into their lives, we love us some famous people sharing their love for books. Here’s a round up of celebrities on the internet whose bookish posts and recommendations are a delight.

#1. Mindy Kaling tops every bookish celeb list EVER, so much so that we’d devoted an entire post to her recommendations early this year. She recommends books, she’s written two of her own, and here’s a post of hers where she’s nerding out at Harry Potter World.

She also posts photos of her daughters reading, which are adorable. #ReadingIsMyRave

Friday night at the rave, yo.

#3. Diane Guerrero’s recent published memoir, In the Country We Love, has meant lots of bookish posts from her, including this, where we get the feeling that she loves a good library as much as we do.

Oh just a library with a view to the MET @kylehardermakeup ❤️

#4. Mayim Bialik of The Big Bang Theory fame is an awesome book-nerd whose website Grok Nation runs lots of bookish posts. She also participates in an online book club, where she posts photos of her current reads and her fans follow suit. Mayim and her fans use #readwithMayim and #virtualbookclub to share books online.

For National Get Caught Reading month I did a post about the top 5 books I feel sum me up best. What are you reading this month? See my picks @groknation (link in bio).

Starting chapter 10 of #WhiteWalls. It’s hard to put down. Hope to make a big dent this weekend. #readwithmayim @groknation #virtualbookclub

#5. Sofia Vergara of Modern Family recently posted a photo of Gabriel Garcia Marquez’ Of Love and Other Demons in the original Spanish, saying that it was the only Marquez she hadn’t read. Now we know why Modern Family‘s Gloria is a Garcia Marquez fan.

Starting the only one I have not read yet!?#gabrielgarciamarquez #colombia #donttextmetillmondayporfavor

#6. Emma Watson’s feminist book club, which she launched three months ago on Goodreads, has not disappointed. She often posts Instagram photos of the books she chooses with #OurSharedShelf.

#7. Drew Barrymore recently published her memoir, Wildflower, which meant bookish posts all ’round. I mean, who doesn’t need a little dogs-reading-books in their lives?

@rustyrodas ! This gentleman is apparently very literary and I am in love with him. I am also incredibly grateful he has added WILDFLOWER to his reading list. #Iheartrusty #wildflowerbook

#8. Sophia Bush of One Tree Hill fame is a source of bookish goodness on Instagram, where she talks about the feels her current reads are giving her, and spreads her love for Virginia Woolf.

this. happy birthday virginia v @azitaloves ・・・ “Words belong to each other. How can we combine the old words in new orders so that they survive, so that they create beauty, so that they tell the truth? That is the question. Words do not live in dictionaries; they live in the mind. And how do they live in the mind? Variously and strangely, much as human beings live, by ranging hither and thither, by falling in love, and mating together. It is true that they are much less bound by ceremony and convention than we are. Royal words mate with commoners. They are highly democratic, too; they believe that one word is as good as another; uneducated words are as good as educated words, uncultivated words as cultivated words, there are no ranks or titles in their society. They hang together, in sentences, in paragraphs, sometimes for whole pages at a time. They hate being useful; they hate making money; they hate being lectured about in public. In short, they hate anything that stamps them with one meaning or confines them to one attitude, for it is their nature to change. Perhaps that is their most striking peculiarity — their need of change. It is because the truth they try to catch is many-sided, and they convey it by being themselves many-sided, flashing this way, then that. Thus they mean one thing to one person, another thing to another person; they are unintelligible to one generation, plain as a pikestaff to the next. And it is because of this complexity that they survive. Finally, and most emphatically, words, like ourselves, in order to live at their ease, need privacy. Undoubtedly they like us to think, and they like us to feel, before we use them; but they also like us to pause; to become unconscious. Our unconsciousness is their privacy; our darkness is their light. . . . That pause was made, that veil of darkness was dropped, to tempt words to come together in one of those swift marriages which are perfect images and create everlasting beauty. And when words are pinned down they fold their wings and die.” Virginia Woolf – From the only existing audio recording of her voice voice via @brainpicker bit.ly/HappyBdayVirginia (Photo from my favorite day in Paris)

Bless you @jennyandteets2 for leaving this stupendous gem waiting for me. This book. I can’t even. Have you ever laughed so hard that your eyes puked tears? Whelp. Go get this book. The mixture of completely demented and totally vulnerable honesty will have you in stitches. You’re welcome. ? #LiveFastDieHot #JennyMollen #FearlessLunatic

#9. Sarah Jessica Parker loses her cool in libraries and is a member of the YES, MORE BOOKSHELVES gang.

That’s me hanging for a moment in the legendary @harvardlaw library. Moments before addressing the graduates. I may appear calm, I was not. Photo credit, my trusty guide Yaseen. X, sj

#10. Lena Dunham, creator of Girls, recently got her own book imprint, so her bookishness is quite established. She spends her holidays reading, her newsletter Lenny Letter has some great book recs, and she recently auctioned off signed copies of her diary entries for the NY-based nonprofit Girls Write Now.

Exploding with joy from all your pics of you with #isitevil. Books are a kiss made of paper ?

#12. Uzo Aduba, who stars in the TV series Orange is the New Black (Based on a book, and frequently features bookishness) is a lover of all things bookish.

#13. Reese Witherspoon, who shares her reading with her fans with #RWbookclub, is a regular and avid book person, and you can check out her recommendations here. Here’s some additional proof of her bookishness and why we love her…

#14. Retta, who also loves books on Parks and Rec as the brilliantly hilarious Donna, is a fan of feminist books…

#BetterLateThanNever I only order books that match my decor.

You guys relax. It’s no big deal. We’re friends. We give each other birthday gifts. Whatever. ????? #MyLove4HimIsBoundless

#15. Florence Welch, of English indie rock band Florence and the Machine, has absolutely gorgeous Instagram posts of books. A recent post even had ‘… as I greedily read two books at once’ as part of the caption, and I FEEL YOU, FLORENCE.

‘Then fatally I began The Wind-up Bird Chronicle. That was the one that did me in, setting in motion an unstoppable trajectory, like a meteor hurtling through a barren and entirely innocent sector of the earth’ Beautiful passage about Murakami in M-Train. Feels like a @betweentwobooks blessing from Patti Smith as I greedily read two books at once…x