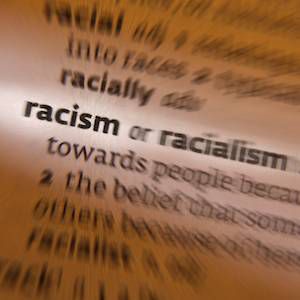 Sometimes books haunt you not because you’ve read them, but because you haven’t. The solution for this dilemma seems easy enough–why not get it over with and read it? But because books are books, that’s not always easy.

For a long time I’ve never been able to entertain the idea of reading Joseph Conrad’s Heart of Darkness. For a postcolonialism class during my first year in college, I was assigned an essay by Chinua Achebe titled “An Image of Africa: Racism in Conrad’s Heart of Darkness.” In it, Achebe systematically points out how Conrad’s prose depicts Africa as savage and prehistoric, to better contrast against Europe’s success in civilizing their environment. He quotes passages where unnamed inhabitants of the Congo are described in increasingly dehumanized ways, speaking in stereotypical broken English and explicitly called ugly.

And so this essay was my very first experience of Joseph Conrad, snippets of prose that turned my stomach and filled me with unarticulated anger. The well has been poisoned, and despite being one of the shortest works in the Western Canon, I’ve actively avoided reading it or any of his other works for more than ten years.

My objections against reading it still stand: Why should I, a brown person living in a formerly colonized country, poison my mind further with a distorted image of other people of color and enforce within myself a colonialist vision of the world? As years came between me and my first visceral reaction to Heart of Darkness, however, my feelings about this book have become more complicated.

One reason is a recent book discussion by my local book club. For March, we read Arundhati Roy’s The God of Small Things. The phrase “the Heart of Darkness” kept showing up in the prose, and the imagery of the river in the novel also seemed like an echo of the Congo River in the Conrad story. I found it very intriguing that a writer like Roy, a fierce critic of neo-colonialism, would reference this infamous book. It felt to me that she was grappling not only with Joseph Conrad, but also with Achebe.

My long relationship with reading also means becoming fascinated with genres that admittedly have dubious tropes. Case in point: noir fiction, true crime, historical romance, even quaint Golden Age mysteries. Why should I blithely elide the racism in Arthur Conan Doyle or Agatha Christie (and they have some doozies) and choose Joseph Conrad as the scapegoat for every racist writing in Western literature?

Another reason is the persistent feeling that this book has taken up a lot of intellectual space within me only because I haven’t read it. It’s kind of the same feeling I got when I bailed out of Mark Z. Danielewski’s The House of Leaves so many years ago. The haunting felt so present that I eventually decided to go back and scale the novel again last year. Now, HoL has been subdued and I no longer feel this weird pang when I think about it. I still identify with the person who cringed at the bits quoted by Achebe, but I also want to form my own opinions. I want to know instead of guess what the horror is.

Which is not to say that people shouldn’t decide to refrain from reading a writer for their own peace of mind. I’m holding off reading Bret Easton Ellis, Jonathan Franzen, Ayn Rand, H.P. Lovecraft, Sophie Kinsella, and John Updike. I know that as of this moment, I cannot approach their works with any semblance of good faith, so I’m holding off, at least for now.

But when it comes the Heart of Darkness, I feel like I’m slowly circling back into its orbit–it was one of the novels nominated as our book club pick for July. It didn’t win, but I actually voted for it. (In case this matters, the other nominations were A Passage To India and The Quiet American. The moderator clearly had a theme going on.)

I’m pretty sure I’m going to tackle it in the near future. There’s more than a decade of reading that is buoying me up now, writers who actively push against unenlightened ideas about people of color. I’m better equipped to articulate things that feel wrong even if they’re “just art.” And since I haven’t read Achebe yet except for his essays, I may just close the circle even more neatly and read them in tandem.