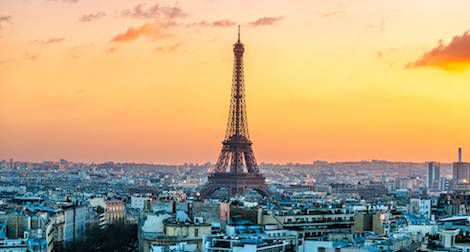 Last December I got to spend ten days in Paris. All of the touristy stuff was as good as I had imagined, and most of it was way better. My eyes popped out when I saw the Louvre, and I felt appropriately chilled and hushed in the catacombs beneath the city, getting stared at by thousands of skulls in the dark. I saw Jim Morrison’s grave, which reminded me that I can’t stand The Doors, and I got to go to the midnight mass at Notre Dame on Christmas Eve.

The Eiffel tower was sparkly, the Palace at Versailles was breathtaking and disgusting, and all in all, the trip was everything I had hoped for.

But even though Paris delivered in a big way, nothing got me as excited as the prevalence of the many, many bookstores. I live in Salt Lake City. We’ve got a couple of Barnes and Nobles, and three small independent bookstores that have been around for a long time. But that’s it.

When we got there, I asked the lady from whom we were renting an apartment where the bookstores were. She said there were too many to count, which seemed baffling and I figured that she must have been a lunatic.

She also said, “All of the vendors here are nice, the booksellers especially, but stay away from the fishmonger. We do not like him.”

I never ran afoul of the fishmonger, but she was right about the bookshops.

Paris seemed to have a bookstore on every block, and most of them were at least the size of the independent stores here. And I only found a couple of stores that tried to represent a variety of genres.

I’d started learning French a year earlier for the trip, but even though I kept seeing the word Librairie everywhere, I couldn’t believe that there could possibly be as many bookstores as I was seeing.

When I went into the first one, I couldn’t find anything but cookbooks. Then I looked at the sign. It was a cookbook store. Thousands of cookbooks!

Over the next few days I went into a bookstore that was nothing but photography books, another with only books of architecture. There was a bookstore that only stocked old leather-bound books that were probably old when Rabelais was writing.

My very favorite store was the second one, where I got to practice my French. I managed to ask for copies of Blood Meridian, Infinite Jest, House of Leaves, and A Confederacy of Dunces in French. The manager was delighted, and proceeded to recommend and describe so many books to me that my intermediate-level French abandoned me entirely.

She also cautioned me with grave conviction that these were not books for French novitiates.

And not only were there bookstores everywhere, people were reading everywhere. I work in a massive public library in America and it catches me off guard these days when I see someone sitting down with a book.

Most of the cafés in Paris had an outdoor seating area, and it wasn’t unusual to see four out of ten people sitting alone, reading. It gladdened my librarian’s heart as much as all of the smoking tormented my asthmatic’s lungs.

I started making a list of the books I saw people reading. There were three instances of The Da Vinci Code. I didn’t see anyone reading Proust or Camus, but I did see two men at a Starbucks who were each reading different books by Kierkegaard. There were also a ton of Sophia Kinsella books, whose covers were easy to spot from a block away.

The store that everyone told me to go to was probably my least favorite. I went into the much-vaunted Shakespeare and Company and was confused when I was told that they didn’t have books by American authors in French. Also, it was so crowded and bustling that I could have lifted my feet up and been swept along by the crowd. It had its charms, but was practically hostile to the gentle act of browsing.

So far all the great memories of that trip, there are few things I will look back on with as much fondness as starting down a new block and knowing that I’d probably find a bookshop.

PS: I have since read Infinite Jest in French, which I believe levels me up to maximum pretentiousness, even though I only comprehended about 60% of it.