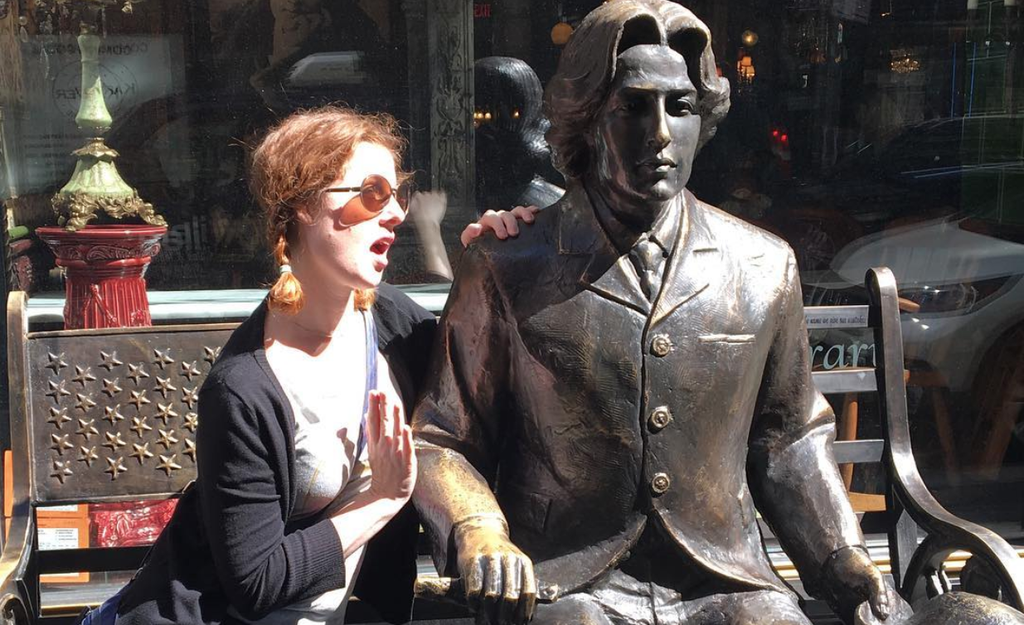 Naturally, I couldn’t leave the new Oscar Wilde-themed novelty gastropub in Manhattan to such a fate. Yes, you read that last sentence right.

A friend and I first passed Oscar Wilde a few weeks ago—in a couple of senses, because not only is that the name of the restaurant, it’s got a bench out front with a statue of its namesake looking dapper and slightly uncomfortable. The ornate windows are painted with gilt lettering and crammed with Victorian knickknacks, and the glimpse of the bar inside—at 118.5 feet, the longest in New York—is impressive. The whole effect was striking enough that we resolved to go back for dinner.

Gossiping with my best buddy #oscarwilde.

As probably befits a restaurant named for Oscar Wilde, the overwhelming effect upon walking in is: my god, The Aesthetic. The place is lit by a billion lamps and chandeliers, many festooned with ostrich feathers, and every available ledge and mantelpiece (there are a lot of mantelpieces) is crammed with Victorian-ish bric-a-brac. Directly over our heads as we ate, for example, was a fantastically ugly two-toned marble cherub with a small figurine of a dog poking out from behind him, and at one point we pulled an antique book down off the nearest ledge and discovered that it was an alphabetized guide to the characters of English literature. Perfect reading material for dinner! I guess!

Except once we dug into the historical references a bit, they didn’t seem to be strictly Victorian? To be precise, the bar is Victorian- and Prohibition-themed, since the building spent a little over a decade as the Prohibition Enforcement Headquarters. But the Victorian era and the Jazz Age are wildly different in terms of decor, music, social mores, and even food and drink, so they make pretty strange bedfellows as shared inspiration. And the building’s historical antecedents don’t explain why the sound system alternated between The Best of Glen Miller and classic rock, or why the ladies’ room had an old time-y wireless in it playing what appeared to be a WWII-era broadcast. The whole thing had a general aura of “Is it kinda old? Chuck it on the mantelpiece! Any mantelpiece!”

(Also, their website boasts: “Mens room [sic] based on Leslie Castle in Ireland where Paul McCartney got married,” so…there’s that. Have fun, fellas!)

The cocktail menu is Oscar Wilde’s high point. It still suffers from the bar’s lack of clarity—there’s a Victorian section, a Prohibition section, a “Wise Guys” section (including a drink called “My Bookie’s Wife’s Cocktail”), and a Seasonal section—but at least all four look and taste good. True, they only gave us one drink menu because they had somehow run out (on a Wednesday night with a half-empty space), but I enjoyed my Bee’s Knees (gin, honey, and lemon) anyway.

It’s with the food that the menu really runs into trouble. You might expect Irish cuisine, but that’s largely not what you’ll find, unless there is a Gaelic origin I’m unaware of behind calamari, sesame kale Caesar salad, or schnitzel. There are a couple of clearly UK-inspired dishes like “Banger in a Blanket” (wrapped in puff pastry, American-style, instead of in bacon like the Brits do) and “Cottage Pie,” but even the “Wilde Burger” is simply a burger topped with, of all things, American cheese. There is something called “Broccomole,” which I can only imagine is guacamole made with broccoli, and something else called “Airline Chicken Breast,” and both of things sound quite frankly too self-punishing for Wilde to ever have gotten on board with. The most Irish thing on offer is “Grilled Cheddar Irish Skellig,” which, after some careful googling, turned out to be a grilled cheese made with cheddar from the Irish island of Skellig. (It came with apple chutney and was actually delicious.)

There was no dessert menu. “We’re still working on that!” the waitress told me.

Upon receiving the bill, we noticed that dinner and drinks for five had a sales tax of less than two dollars. We pointed this apparent discrepancy out to the waitress (I know, I know, you never point out errors in your favor, but we’re Those People).

“Oh, we don’t tax drinks!” she informed us cheerfully. Possibly to tie into the Prohibition theme? Is this a thing? I don’t think this is a thing.

We refrained from pointing out that sales tax isn’t really discretionary, or that 8.875% of dinner for five was still more than two dollars, and paid the bill. Despite the “smoky Victorian gentleman’s club” aesthetic, the artificial light blaring through the bar’s stained glass windows had made it seem like about three in the afternoon all evening, so we emerged into the twilight of NoMad blinking like parakeets who had suddenly discovered it was time to go to bed.

Also, when I tried to look up their website to write this article, it wasn’t working.

Look, the place has only been open a couple of months, and even the best restaurant can take a while to get into the swing of things. I know that. And honestly, I found the somewhat random quality of the whole endeavor more entertaining than anything else.

It’s more that I don’t know who this restaurant is for. It reminded me of nothing so much as venerable New York institution Jekyll and Hyde, a themed restaurant I once refused to attend a birthday party at when I was 11 because I found it too scary (warning: website autoplays music like it’s 2003). But Oscar Wilde, despite being a contemporary of Stevenson, hasn’t gotten the kind of mainstreaming Jekyll and Hyde has. The restaurant is too obscure for many and too inaccurate for history and literature buffs; too scandalous for tourists and too tame for New Yorkers. You can’t host an 11-year-old’s birthday party there. “Happy birthday, little Jimmy! The artist we hired is going to paint a picture of you! Never let anyone look at it again.”

By all means, go and have a cocktail to celebrate Oscar’s 163rd birthday—I recommend the Bee’s Knees, but if you have My Bookie’s Wife’s Cocktail, please come back and tell me how it is! But I would do it soon. The grilled Skellig was good and I like Glen Miller as much as the next person, but if this place is still open by the big 165, I’ll eat one of Oscar’s most fabulous hats.

And he would hate that.