Oscar Wilde once expressed the sentiment that “There is only one thing in the world worse than being talked about, and that is not being talked about.” Not that he had to worry about the latter: Wilde is among the best known and celebrated writers in the English language. His plays enjoy regular performances (the Vaudeville theatre in London just closed a yearlong Wilde season, which featured four plays). The plays also have numerous on-screen adaptations, as does his (only) novel, The Picture of Dorian Gray. Wilde himself has enjoyed a wonderful posthumous life, portrayed as a tragic hero who fell victim of Britain’s anti-homosexuality laws and sentiments.

The latter is certainly true. Wilde, however, was also a flawed and complex human being. The Happy Prince, a biographical drama focusing on Wilde’s post-prison years, which was written and directed by and features Rupert Everett, makes this apparent. The movie came out last year and earned praise by Wilde’s grandson, Merlin Holland. Coincidentally, 2018 saw the publication of at least four new major works on him as well – three biographies and a commentary.*

The publication of works on Wilde is not unusual – a new one comes out at every now and again. However, four major works and a biopic at the same time is unusual, especially in a year without any specific significance (2019, on the other hand, marks his 165th birthday). Still, for those interested in the most up-to-date research on his life (or specific aspects of it), or seeking to better understand some of his less popular works, this is a great opportunity. Here is the list: 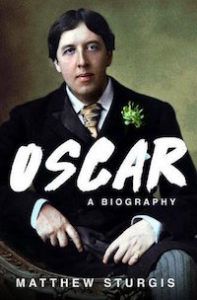 Oscar: A Biography by Matthew Sturgis

When I first encountered Sturgis’s book, I was a bit skeptical. My first instinct was to wonder why the world needed anther major biography. Reading his introduction, however, piqued my interest, as Sturgis, clearly expecting questions or skepticism, defends his work rather convincingly. It is a complete, evenly-balanced look at Wilde’s life. Unlike Richard Ellmann’s famous biography, it pays extensive attention to Wilde’s final years. It also features recently discovered evidence. Although it initially seems to be an intimidating volume (it is 720 pages long, 870 with the notes and index), it benefits greatly from Sturgis’s engaging writing. 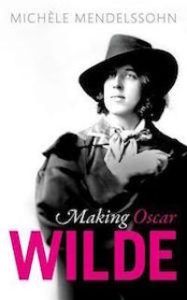 If you ever wondered about what made Wilde the person that the world now knows him to be, this book is a good place to start. Mendelssohn dedicates her book to the early part of Wilde’s life, from his childhood until his return from the United States. In fact, the majority of this volume focuses on his American tour, which defined his later work and image. More importantly, it tackles a difficult subject: Wilde’s attitudes on race and racism.

Mendelssohn dove into previously unused material to discover that American prejudice against Irishmen was so strong, it paralleled the prejudice against African Americans. Some publications, in caricaturing Wilde, depicted him as an African American. The practice extended to the stage, as well, where actors wearing blackface mocked the writer in different sketches. Wilde’s response was to only emphasize his Irishness further. Mendelssohn’s work is perhaps the first time this aspect of Wilde’s persona has been tackled. Importantly, there are no perspectives from authors of color on the subject yet, though one can hope that her book will inspire a dialogue. For now, it provides a new dimension to understanding the man he became after that trip. 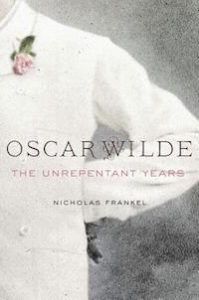 Wilde’s post-prison years and his end are often deemed quite painful and grim, and in the past have not been given too much attention. Richard Ellmann’s biography famously only briefly touched upon them. Yet biographers (such as Sturgis) and scholars have taken a second look and acknowledged their importance.

Frankel dedicates an entire book to understanding this period in Wilde’s life. Now, to be clear, as a Wilde fan, I still find the topic difficult. Yet I also think that, grim and painful that period might have been, three and a half years is a significant amount of time. Wilde was not done with life, perhaps in spite of losing his family and seeing his career utterly destroyed. Frankel’s book provides helpful analysis of that chapter in Wilde’s life. He divides it into two parts: Wilde’s time in prison and the years leading to his death. It is an interesting read for anyone who wishes to better understand what motivated Wilde in his final years. 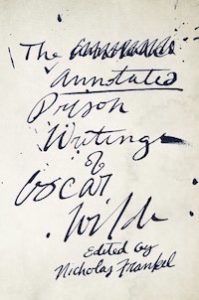 The Annotated Prison Writings of Oscar Wilde by Nicholas Frankel

Frankel published a second book related to Wilde in 2018, and it can serve as a useful companion to The Unrepentant Years. As the title suggests, this one is a collection of Wilde’s prison writings. The book is useful in three ways. First, it is an account of Wilde’s experiences from his own perspective. Second, it provides context for the works, which is useful to better understand his writings. Third, the works are all in one volume and one can cross-reference and read them chronologically. Frankel also wrote a long and, to my mind, excellent introduction. This is a good insight into the hardest years of Wilde’s life. This anthology shows not only what he went through, but how his experiences affected and, in some ways, changed him.

As you can see, there is a general lack of works about Wilde by authors of color. If you do know of any, please do share below. For myself, while I hope that Mendelssohn’s book might open a discussion about his attitudes toward race relations in America, this is yet to happen.

*Two more books related to Wilde came out in 2018, Oscar’s Ghost by Laura Lee and In Praise of Disobedience: The Soul of Man Under Socialism and Other Writings, an anthology edited by Neil Bartlett. I do not know enough about them to discuss them.