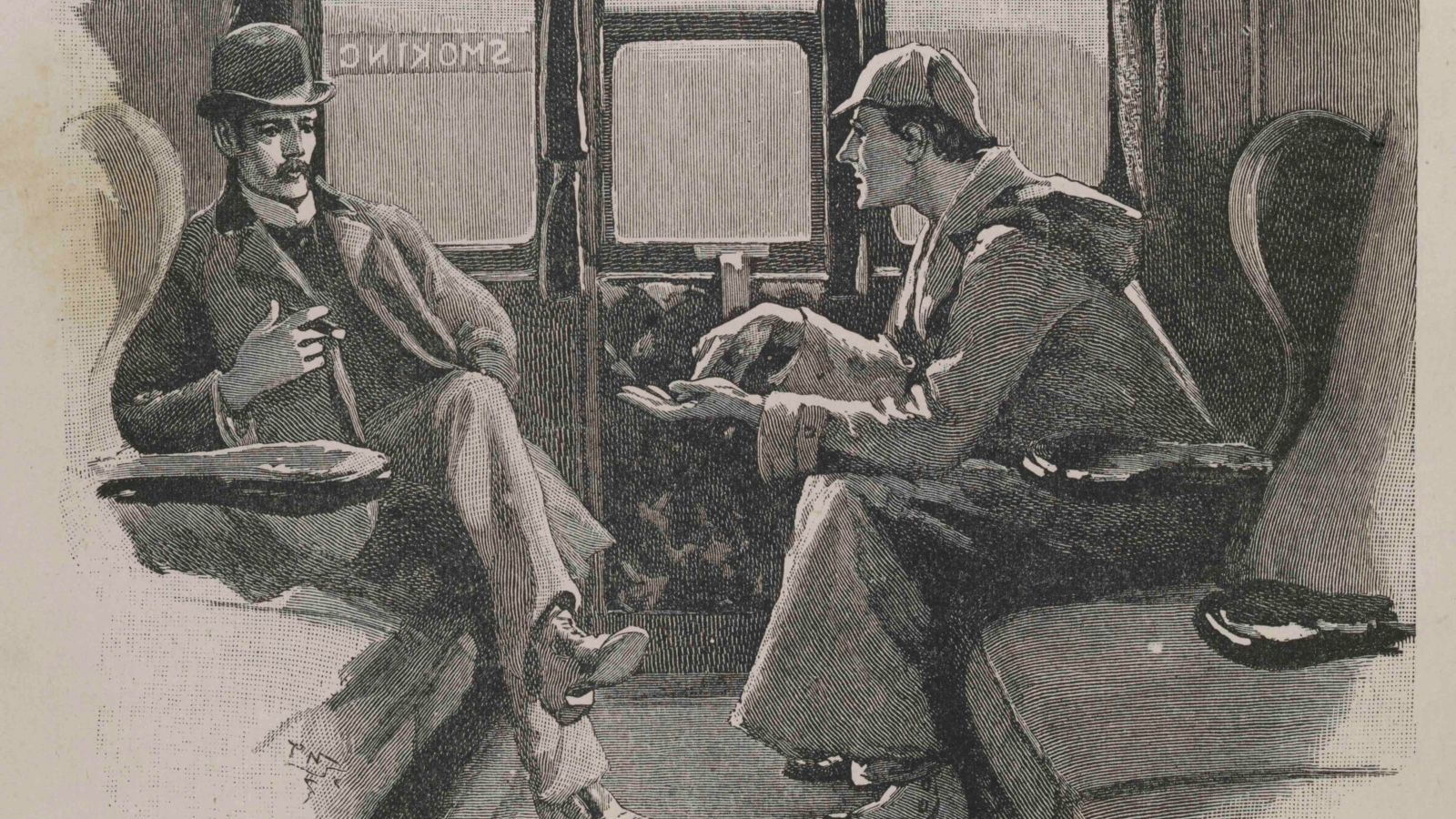 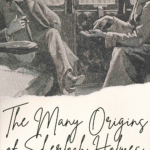 This year, Frogwares will release a new Sherlock Holmes computer game, Sherlock Holmes Chapter One, that takes place before he became England’s most celebrated detective. We will get to join young Holmes as he travels the Mediterranean in search of answers about his mother’s death. But before we solve that mystery, let’s turn to a far older one: the secret of the origins of Sherlock Holmes.

As Dr. Watson tells us in the original stories, Holmes rarely talked about his past. Many adaptations, even the most famous ones, are happy to leave it a closed book. The adaptations that do attempt to pull back the curtain on Holmes’s pre-detective days tend to run in all sorts of different directions. Hey, why not? With so little to go on, it’s open season for professional and amateur fan fiction writers alike. However, there are common threads that run through these stories, and they’re worth exploring.

(I will be spoiling the stories I discuss. This is your only warning.)

Let’s go over what information the original stories provide us about Holmes’s upbringing. In The Greek Interpreter, Holmes relates that his “ancestors were country squires,” and that he is descended on his mother’s side from “Vernet, the French artist.” (This isn’t as helpful as it could have been, since the Vernet family produced quite a few famous painters.) We also know that he has an older brother, Mycroft, who either “audits the books” for the British government (per The Greek Interpreter) or “is the British government” (per The Bruce-Partington Plans).

That’s about it, really. We don’t even know Holmes’s birthday, though that hasn’t stopped scholars from concocting hilariously baseless theories about it.

The only canon stories to deal extensively with Holmes’s youth are The Gloria Scott and The Musgrave Ritual. In the former, Holmes solves a case for the father of Victor Trevor, his only college friend (“I was never a very sociable fellow…”). It was this adventure that inspired Holmes to become a detective. In The Musgrave Ritual, we see Holmes after he has set up his business but is struggling for clients. One early client is an old classmate, Reginald Musgrave, who intriguingly remarks to Holmes that “you are turning to practical ends those powers with which you used to amaze us.”

While these stories do take place in Holmes’s past, they aren’t particularly enlightening on the subject of his personal life. All they tell us is that Holmes was always a smart little cuss, a loner, and possibly a bit of a show-off.

The canon stories about Holmes’s past both emphasize his school connections. Adaptations featuring a younger Holmes often take place in an educational setting as well. The 1922 film Sherlock Holmes, starring a young John Barrymore, begins when Holmes is still in college. He is a curious, contemplative student who spends a lot of time navel gazing until Watson — here little more than a classmate of his — recruits Holmes to solve a mystery.

We see Holmes as an even younger student in an opening scene of 2018’s Holmes & Watson. After being cruelly pranked by his peers, Holmes resolves to eschew all emotion and live by logic. One of the main arcs of the film (if you are willing to stretch the definition so far as to call this a “film”) is Holmes learning that it’s okay to have feelings and to let people in.

Then there is Young Sherlock Holmes, which explicitly states that it is a “what if?” exercise and should not be taken as canon. (It should also not be confused with Young Sherlock Holmes the YA book series by Andy Lane, featuring a 14-year-old Sherlock, or Young Sherlock: The Mystery at the Manor House, the 1980s miniseries.) This 1985 film shows Holmes and Watson meeting as teens at boarding school and solving their first case together. Here, Holmes is precocious, blunt, and impatient, but also friendly. Unfortunately, things end badly, with Holmes leaving the school after the girl he likes is killed.

This brings me to my next topic:

Holmes’s “I must shun emotion” revelations in both Young Sherlock Holmes and Holmes & Watson occurred because of an unsuccessful romance. This, they postulate, is the reason why the Holmes we know is such a cold fish: he just couldn’t stand the heartbreak.

This theme crops up briefly in 1970’s The Private Life of Sherlock Holmes. Here, Holmes claims that all women are “unreliable” and cites as proof a weird little story about how his fiancée died right before their wedding. Then again, he tells this story to an inquisitive female client who is definitely more than she seems, so he’s probably lying to make her uncomfortable. He won’t even tell Watson if he’s straight or not, so why would he spill his life story to a woman he just met?

Adaptations that do not give Holmes a dearly departed girlfriend give him a messed-up female relative instead. Sherlock spent a whole season (that is, three episodes) on Holmes’s repressed childhood memories, in which his hitherto unmentioned and extremely evil sister looms large.

Then there’s the good ol’ dead mom trope. Sherlock Holmes Chapter One is going that way, just like Elementary before it: the episode “Who Is That Masked Man?” tells us that Holmes’s beloved mother was a drug addict, thus partially explaining his own addictive personality.

While most of the women in Holmes’s life play a passive role in his development (e.g. by dying), the men take a more proactive role.

The idea that Holmes was abused or neglected is perhaps the most common thread linking his disparate origin stories.

In addition to the dead mom, Elementary‘s Holmes has a very distant, manipulative father, Morland. Their relationship is so bad that Morland once suspected Sherlock of trying to murder him. Sherlock’s animosity mostly stems from the fact that his parents’ divorce — during which Morland was needlessly vindictive, as even he admits — precipitated his mother’s death. Learning about his mother’s addiction did nothing to change his attitude.

During one scene in Young Sherlock Holmes, Holmes is drugged and hallucinates a rather grim interaction with his parents: his mother cries while his father scolds him. It’s not clear if this is a memory or a fictional scenario, but the hallucinogen preys on the victim’s insecurities, so this didn’t spring out of nowhere. In 1974’s The Seven-Per-Cent Solution (and subsequent film adaptation), there are ironically no drugs involved when young Holmes watches his father kill his unfaithful wife and then himself. The event is so traumatizing that Holmes represses the memory and recasts his mother’s lover, Professor Moriarty, as a criminal mastermind.

Granada Television (now ITV Granada) produced at least two Holmes adaptations: the aforementioned Mystery of the Manor House, and the far more famous series, often simply called “the Granada series.” Mystery of the Manor House features Holmes, fresh out of boarding school, being kicked out of his own home after his parents dispose of the place and hare off to France — without telling him first. Holmes is stunned but not upset: in his words, he’s “not one for close personal relationships.” That says a lot without saying a lot. He does have friends among the lower classes, most notably his future landlady Mrs. Hudson, currently a cook for his sanctimonious aunt. He is also fond of his French grandmother, so he wasn’t entirely devoid of love growing up.

The Granada series didn’t deal much with Holmes’s past, but there are hints. In “The Master Blackmailer,” Watson hypothesizes that the titular villain was “starved of affection” as a child. Holmes responds with absolutely the saddest face I have ever seen. Later, in their version of The Golden Pince-Nez, he is visibly rattled to learn that his father left his magnifying glass to Mycroft, Sherlock’s brother. Granada is apparently suggesting that the Holmes patriarch played favorites — or that Sherlock thought he did, anyway.

And then there’s the much-harped-on relationship between Sherlock and Mycroft. In some versions, including the canon, they get along just fine. And yet, they are quite antagonistic in Sherlock, Elementary, Private Life, and at least one of the Frogwares games. The “Mycroft Holmes” novels by Kareem Abdul-Jabbar and Anna Waterhouse feature a younger Mycroft and Sherlock who are evidently not as close as they could be. I haven’t read these books, so I can’t say if their distance is due to a) the seven-year age difference, b) contrasting personalities, or c) an unhealthy home environment. I’m willing to bet it’s some kind of combination. The implication of all these adaptations is that at least part of Holmes’s personality was shaped by his longtime rivalry with his brother.

We can also infer Holmes’s troubled family life from the stories themselves. As I mentioned before, Holmes was always reluctant to discuss his family. He was also strangely broke. Everything indicates that he comes from wealth (see: “country squires”), and adaptations depict him that way as well. So why is Holmes so hard up for cash that he has to take on Watson as a roommate in A Study in Scarlet? One logical conclusion is some sort of split from the family.

All of this supports the general consensus that Holmes had a less-than-ideal childhood.

The Game Is Afoot

Sherlock Holmes is the most famous — and famously eccentric — detective ever created. It’s only natural that fans want to do more than watch him solve mysteries and to try to solve the mystery of Holmes himself. The fact that there can be no “definitive” answers is part of the attraction.

The examples I’ve discussed are certainly not the only adaptations to delve into Holmes’s past. I didn’t get into the really weird adaptations, like 1988’s Without a Clue, where “Holmes” is a drunken, lecherous actor who Watson hires to bring his creation to life. I also didn’t have time for in-depth analysis on any one topic, although there is much to be said about the assumption that Holmes’s lack of romantic entanglements is due to heterosexual heartbreak, or how his experience with abuse could have influenced the kinds of cases he accepts, which often involve confronting the rich and powerful about their bad behavior.

What this article does do, however, is give a pretty good idea of the current state of storytelling regarding Holmes’s origins. I look forward to seeing what Frogwares brings to the discussion.